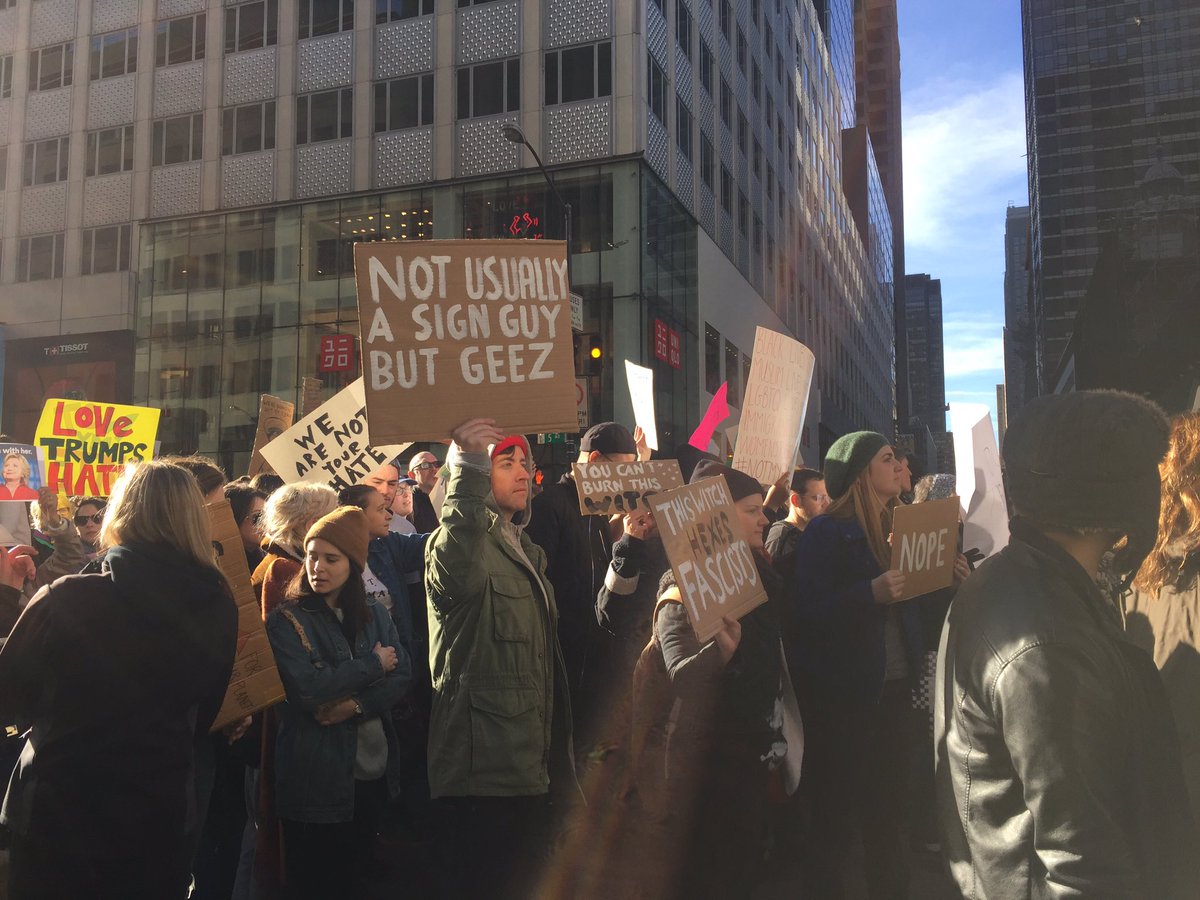 We, Western people clinging to the middle class, live in a time of depoliticization. The prevailing form of political engagement is well illustrated by the "Not usually a sign guy but geez" sign. It’s a reactive (and sometimes reactionary), "this is too much" politics. Unfortunately, knowing what one doesn’t want is not enough. Throughout the whole presidency of Donald Trump, people were supposed to congregate at the Museum of the Moving Image in New York to deliver the words "he will not divide us", while being live-streamed. This live-stream was ingeniously shut down several times by far-right trolls.

Despite the performative efforts of LaBeouf, Rönkkö & Turner, we must admit that we were divided in the first place. It’s a division that transcends the current political juncture. This is why the precondition for a convincing progressive agenda is the construction of a collective subject that is not merely united by a common source of antagonism, but by a genuine sense of belonging and a series of mutual demands that go beyond last-minute constitutional emergencies. The Women Strike on the 8th of March was a vigorous move in this direction.

Much has been said about the robust role that designers play in today’s society. According to this somehow propagandistic narrative, design has the power to grow public awareness and facilitate decision making. Yet, the results of the US election, apparently influenced by the heterodox communication interventions of the Alt-Right, could be interpreted as a failure of professional design culture.

The design universe seems to have many answers to the question "what is to be done?" Recently, the AIGA/NY association launched a "citizen designer pledge" in which the signees declare that they "believe the design community can bring about a better country, by designing better ways for Americans to effect change." The way in which professional designers conceive civic engagement makes me think of AG Fronzoni, a cultish figure in the Italian graphic design landscape, who seems to have said that his ambition wasn’t to design posters, but to design human beings.

I suggest to understand "citizen designers" not as mediators between government and citizenship, but simply as citizens themselves. In this way, designers would more easily recognize the fact that on a large scale many of them are, like several workers in other areas of the creative industries, disadvantaged. Before discussing "what design can do", we should reflect on what most designers can’t actually do. For instance, many of them can’t afford to pay their student loan with the practice they studied for, they can’t suspend the anxiety produced by the instability of their career, they can’t indipendently pay their rent or buy a house. In short, many designers can’t or won’t afford the design education and profession.1

Yet, design students are increasingly required to be "critical". Within the context of some progressive design schools, "criticality" often means addressing ambitious societal issues that perhaps affect some distant countries. While they try to solve global problems, design students might do a "bullshit job", perhaps in a call center, to finance their studies. As their design practice focuses on the remaining 99%, they forget to be part of it themselves. It’s hard not to notice an analogy with the world of Californian startups, eager to "make the world a better place." And the aspiring designer, whether critical or not, is not so different from the startupper working uninterruptedly in their basement to create a revolutionary product. Both the designer and the startupper seem to live at the same time two parallel lives, both are divided subjects. They are victims of the cognitive dissonance of what I call the entreprecariat.

On a basic level, the entreprecariat refers to the reciprocal influence of an entrepreneurialist regime and pervasive precarity. Entrepreneurialism became a regime when it spilled out of strictly entrepreneurial jobs. Nowadays, individuals are required to behave like entrepreneurs, even if they don’t have a company. Similarly, precarity became paradigmatic of society at large, as a series of diverse yet analogous conditions. These are both material and immaterial, both real and perceived. We call risk society "the manner in which modern society organizes in response to risk". Analogously, precarity is about how the perception of risk (mainly the risk of poverty) organizes isolated subjects. It’s a perceptual precarity that destabilizes feelings. Both precarity and entrepreurialism are impalpable yet constitutive elements of the current social reality. They form the social atmosphere.

However, one can’t properly describe the precariat without referring to a genuine enthusiasm, sometimes of a euphoric kind, that often emerges from or around these conditions. The goal is to regain agency, to turn precarity into flexibility. In the last decades, this attitude has been co-opted by the market and its needs, so it has been reduced to professional self-affirmation and the individual obligation to achieve it. An amalgam of vocation and economic management, it became thorough self-administration. Entrepreneuralism is a common response to the identity crisis of the precariat. Can this energy provide genuine emancipation? This is the fundamental dilemma of the entreprecariat.

Yet, the entreprecarious condition is partly a privileged one, as only a minority of precarious workers are allowed to have realistic entrepreneurial ambitions in the strict sense. For the rest, the entreprecariat signals the fusion of economics and politics, or, more precisely, the dissolution of politics into economics: the structural precarity that politics is not able to prevent is reframed into a call to action for individuals to market themselves.

The entreprecarious condition is characterized by a subordinate relationship with time. Plenty of suggestions on how to master time are discussed every day, as a reaction to the fact that time is still our master. No subjective temporalities survive, since time itself is turned into schedule. Deadlines become the most concrete temporal construct we can relate to. A whole techno-social apparatus emerges around entreprecarious time. The goal is efficiency: time-tracking and getting-things-done app with utopian names like Freedom abound. These apps often mirror the internalized practice of lazy-shaming ("Shouldn’t you be working?") Entreprecarity incarnates the epitaph of circadian rhytms: it means working in bed and sleeping at the desk. We speak of "quality time" because we intuitively realize that what we experience is junktime, time that is, as Hito Steyerl puts it, "wrecked, discontinuous, distracted and runs on several parallel tracks." But entreprecarious time also overcomes the dreadful eight hours tripartition, a rigid division of activity that reflects an obsolete division of labor. It is time tailored on individuals, who are often more bossy than their bosses.

For many, leisure is terrifying. This is because work ethic constitutes the horizon surrounding the sense of purpose of the entreprecariat. Work is performed as if it was a parody, with its own obsessive refrains ("I’m so busy!"). And when busyness is the norm, laziness looks suspicious. Work is so central that hard work is often required in order to work harder: think of all the hope labor put in cover letters, CVs, applications without a certain result. The entreprecariat also signals the equivalence of work and passion. From time to time, the entreprecarious worker has fun at work. Here, personality needs to be tweaked as well: while more and more jobs require "social skills", the general obligation is to hack one’s mood to fit the task at hand, to "exude approachability". The centrality of work requires a constant work on the self.

The entreprecariat recklessly colonizes the space around it. More and more places are converted into informal, temporary offices: cafes, bars, public libraries, airports, hotel rooms… even bathrooms. While the office is continously present throughout the city and within the computer, no genuine continuity is granted to the worker, no reliable routine, no control. The zones inhabited by the nomadic worker are squatted for energy, connection and the faint feeling of being part of a social group.

According to Guy Standing, "the global precariat is not yet a class in the Marxian sense, being internally divided and only united in fears and insecurities. But it is a class in the making, approaching a consciousness of common vulnerability". But how does one identify as the precariat? Here, precarious workers are confronted with a conundrum. Even if they would want to identify as precarious workers, they couldn’t since it would damage their personal brand (not to speak of their self esteem). Here we see the direct effects of individual entrepreneurialism on the the development of a class consciousness centered on precarity. It’s time to deal with the failure of the precariat as a label under which workers would coalesce. Forced individualism and mandatory entrepreneurialism are too strong. The precariat works well as a descriptive term, not a critical one. Precarity is hidden and disguised. It’s not a label people use to define themselves. While in the Netherlands "the precariat" is mostly an academic term, in Italy the term is constantly used by news media with a not-so-veiled negative emphasis. You don’t come out as precarious, you’re outed as one.

This is precisely why I advocate for "the entreprecariat", a term that incorporates the entrepreneurial dimension, it is not (yet) appropriated by news media to be used as a negative descriptor, and it possesses an ironic, non-gloomy allure. The seriosity in which the discourse around precarity is imbued doesn’t leave space to a gratifying sense of belonging. This is why irony is crucial. Irony allows us to recombine our collective understanding of precarious conditions. But, in opposition of the dominant detached attitude that characterizes ironic statements, we need to develop ironic attachment: an ironic stance that doesn’t lead to immobilization, an irony that produces proximity and that turns into action.

Identifying a series of specific demands shared by the entreprecariat is not an easy task. In the meantime, we can reclaim pleasure and foster solidarity. We can rediscover empathy and protect conviviality. We can reappropriate time and differentiate it. We can pivot identity out of career and reduce the burden of work ethic. We can and should enlarge our short intention spans to build a common understanding of what stability might mean today.

How to do so? The short-term objective is externalization: entreprecarity is first and foremost a worldview, an interpretation of reality that orients our behaviors. This worldview, that is at once embedded in the technological apparatus and incorporated by individuals, should be externalized. This can be done especially under a relatively stable situation. In other words, one needs stability to address precarity. Enrolling in a higher education program provides this sort of temporary stability. Students buy time that can be employed with a certain degree of autonomy. This is why higher education programs should be conceived as temporary autonomous elites. In a TAE, students can semi-freely formulate a genuine collective subjectivity. Mocking the daily grinds of self-entrepreneurship and bitingly diagnosing the miseries of precarity, students can produce the next entreprecariat slogans, memes and chants.

The fundamental mission should be one: to construct solidarity under externalized precarity in order to reclaim agency. An ironically-attached, self-reflexive entrepreneurialism can help. Are we willing to become PR experts of the struggle against precarization? Can we disrupt precarity? The entreprecariat should be a construction site cohabited by complementary, even conflicting, perspectives. In order to grow into a solid concept, it needs to catalyze ambiguity. As in the narrative it refers to, it needs to be flexible and adaptable, or, if you like, in "permanent beta". The entreprecariat must be able to be one thing and its opposite, it must incarnate the social and individual contradictions we live by.

[Published on the Citizen-Designer Symposium booklet.]