Like many others, I’ve been following @neuroticarsehol for years now. Mostly popular within graphic design circles, NA is a shitposting account active on both Twitter and Instagram that makes fun of the grandiose statements of the design discourse, its unrealistic claims, its careerism, and its distance to everyday life. 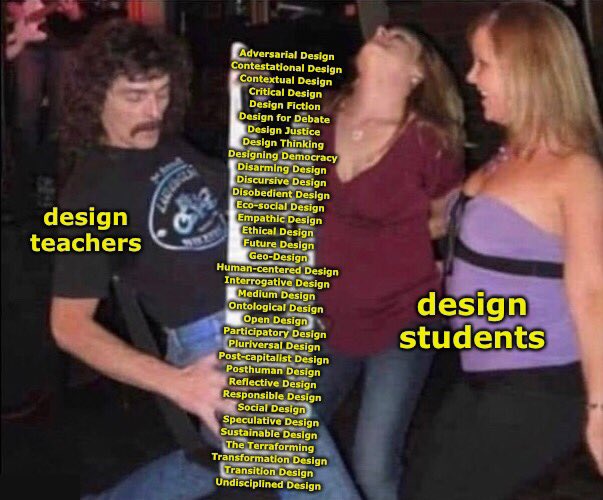 Not everyone likes them. Some more or less prominent practitioners find their points reductive and obvious: ethical or political gestures unavoidably contribute to a designer’s career. This doesn’t mean that these gestures are insincere and that such designer is a hypocrite. Not so long ago, I stumbled upon a starter pack meme made by the students of a German design school. Here, NA appeared behind a red cross. The meme also showed legitimate “equipment”, such as the Glossary of Undisciplined Design, and a We Should All Be Feminists shirt.

While NA starts to get “canceled” (because they’re too cynical, destructive, purely negative), I find their existence very relevant. To me, NA represents the growing distance between cultural production & consumption within the field, between main characters of the discourse and NPCs. Two developments in the field exacerbate this phenomenon: the research turn and the industrialization of education.

Consider the post at the top. It is no coincidence that it shows educators on one side and students on the other. During the last three decades there has been a crucial turn in design education (at least in many avantgarde design schools around Europe, UK and the US). Before the turn, students were mostly trained to become practitioners in a traditional sense, to think of themselves as problem-solvers, to consider design a service, to have clients or at least to work in a studio, etc. After the turn, a student is encouraged, implicitly or explicitly, to become not a technical expert that solves problems, but a cultural producer that frames problems. In other words, an intellectual, or more precisely an organic intellectual: someone who contributes to culture not only by writing books. An intellectual by other means.

The keyword here is research. In Europe the research turn has been diversified but conscious. Already in 2006, research was presented as an alternative to the proletarization of graphic design while now, in 2021, the notion of “artistic research” is at the center of a heated debate. The research promise takes place both at the level of content (methodologies, assignments, etc.) and at the level of people (educators who work predominantly as researchers and thus offer a concrete example of such career path to their students).

In the meantime, there has been an industrialization of design schools. By this, I mean that education has become one of the main industries in the design field, something that Enzo Mari already pointed out some years ago. I wouldn’t be surprised if graphic design education mobilized more money than graphic design as a trade.

The research turn can be considered a response to designers’ lack of access to the operation rooms of problem solving. Of all the highly educated designers cast by industrialized education, only a few might be able to work on fairly complex—and therefore gratifying—problems, while most might become indeed proletarized. The promise of cultural production, of research, compensates this risk.

The research turn generates a common language made of design currents identified by specific labels. A language that is highly dynamic: every year a few new labels pop up. Everyone who participates or wants to participate in design cultural production has to be fluent in these. But speaking the language is not enough. An emergent design current is not just a set of ideas, principles and values but also and especially a distinction device. It doesn’t only matter that I know what, say, critical design is, but also that my name is associated with it. When that happens, the promise is finally realized: not anymore just a cultural consumer, I’m finally a cultural producer.

How many cultural producers can there be among highly educated designers? Not many, I think. The venues for the cultural production of design (from theory-fiction to critical multimedia installations) are relatively little and generally not so well funded.

What happens then to the designers who don’t manage to become cultural producers? To them, there is not so much difference between the “tacky” social design label and the “hip” undisciplined design one, they both appear as signals of a cultural circuit inaccessible to them. The designer as cultural consumer remains a student for life.

I think it is useful to look at this phenomenon from the lens of populism, namely the tension between the elite and the people. Beware: I don’t consider populism an intrinsically right-wing manifestation, but a dialectic at play in various societal spheres. Same goes for elites, which are and will be part of society. I’m not speaking of Jeff Bezos here, but of elites that are commensurate to the context that they emerge from. An elite is not necessarily an exploitative formation, but simply a closed group of people who determines their own criteria of inclusion. Design education, even when it is blatantly anti-capitalist, horizontal and the like, is doing exactly that: determining the criteria of inclusion within its cultural circle.

Similar manifestations of this populist tension take place in other fields like architecture, with meme pages like Dank Lloyd Wright, or at a different scale, with school-specific meme pages like the Dutch wdka.teachermemes (I interviewed them here). IN DLW, the elite is comprised of archistar, megastudios and ivory tower academics, while the people are precarious young architects. For WDKATM, the elite are the managers and the teachers with permanent contracts, while the people are students and flexible teachers.

Design populism is peculiar, because both the people and the elite have similar levels of education. Education is in fact key to understand the current social and economic state of design. Contra the misleading dualism of the school vs the real world, the school is the real world.

Things get messy when a design current is connected to notions of social justice because it becomes difficult to decouple the inherent logic of social capitalization from ethics. The very concrete risk is that social justice is dismissed as elitist, which is exactly what’s happening. Furthermore, the criteria of inclusion of social justice circles actively limit general participation. While anyone could call themselves a “critical designer”, not everyone could present themselves as a “pluriversal designer” without raising some eyebrows. It makes sense: marginalized people don’t want to be robbed once again of their social capital. However, the awareness of a closing window of opportunity might generate a novel conservatism. What does a conservative designer look like? Quite the opposite of the ironic shitposter. One who cherishes order and hierarchy. One who wants to keep politics out of the equation. Here’s Paul Rand writing in 1992:

Both in education and in business graphic design is often a case of the blind leading the blind. To make the classroom a perpetual forum for political and social issues for instance is wrong; and to see aesthetics as sociology, is grossly misleading. A student whose mind is cluttered with matters which have nothing directly to do with design; whose goal is to learn doing and making; who is thrown into the fray between learning how to use a computer, at the same time that he or she is learning design basics; and being overwhelmed with social problems and political issues is a bewildered student; this is not what he or she bargained for, nor, indeed, paid for.

Of course, one thing is when a designers who used to ask a minimum $100.000 fee say this, and another one is when a working class student says the same thing. When the latter happens, it’s important to avoid quick demonizing and take into account the populist tension I’ve tried to describe in order not to turn design education into an arena for resentful conservatism.

As soon as I have more headspace, I plan to come back to this topic and turn these notes into a proper essay. If you would like to publish such a thing feel free to get in touch.