Yesterday, a students’ banner in solidarity with Palestine was removed from the walls of the Piet Zwart Institute of Rotterdam. The Willem de Kooning Academy, whose the PZI belongs to, took out it out because “the University of Applied Sciences does not get involved in geopolitical situations” and “does not take political stands whether on national or international issues”.

This might come as a big surprise for who has witnessed first-hand the often self-congratulatory ostentation of Dutch art & design’s criticality, politicality, activist attitude, and decolonial agenda. On Instagram, two posts before the official statement, one reads: “Hello all! Tomorrow our Instagram will be taken over by WdKA’s climate collective SPIN. 🕷️🌿” 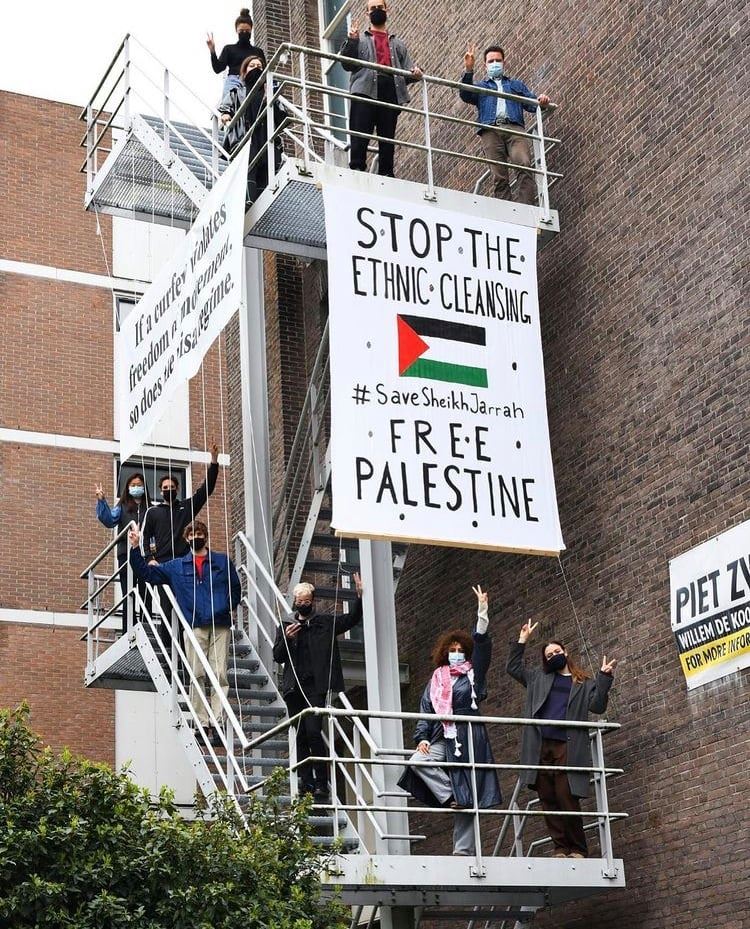 Needless to say, the walls’ cleansing generated a social media wave of indignation. Especially after a 2015 WdKA branded initiative in support of Charlie Hebdo was unearthed. Soon, the keyword became “double standards”, indicating the institution’s eagerness to take a political position — only when such position fits the Western liberal frame and only when it comes at no reputational cost.

It is worth noticing the abyss that separates students and teachers from management. It seems that the former are relegated to “expression”, while decision-making and direct action is fully in the hands of the latter. This is why students and teachers resort to call out tactics. The call-out is the weapon of the ones who have no seat at the table.

The WdKA affair also shows the state of politics within those institutions who feel the pressure to align themselves with values and programs that they don’t fully comprehend and don’t fully adhere to. Seeing like an institution means reducing politics to “content”, to a generic posture that smoothly resonates with the metrics of relevance and urgency. Metrics that can’t be ignored, as any grant-writing artist would confirm. “Politicality” is functional to institutional legitimization, politics is often detrimental to it.

The dilemma of the coming years will be how to reconcile an art and design discourse which is increasingly entangled with specific, even antagonistic political stances with a strategic neutrality and political superficiality. In other words, how to reconcile the internal politics with external politicality. The WdKA stated that its “buildings do not serve as a platform” for political view. But the very removal of the banner platforms a specific political idea, or better, an idea of the political: the idea that politics is a matter of personal opinion, of “empowered professionals with their own views”, rather than a matter of conflict.

One should take the official statement seriously. No authentic political stance can be expected from the institution. Politics will mainly remain at the pedagogical level, that is, both the informal level of conversations and discussions and the formal one of syllabi and programs. Students and teachers might be surprised by the school’s authoritarian decision, but the school shouldn’t be surprised by their reaction. A double bind is in place: in several academies, the educational level prizes the political to the extent that nothing can escape it; while the managerial level is blind to it, or even actively against it when it goes beyond “content”, that is, when it is truly political.

Update 19/05/2021: A group of WdKA staff members published an open letter to denounce the forcible removal of the banner and address the institution’s double standards. In the letter, they acknowledge the divide between the administration and the frontline of teachers and students. They refer to the narrow and opportunistic understanding of politics promoted by the school. Finally, they identify the double bind in which political action is pedagogically prized but institutionally decried.

Update 11/06/2021: The students of PZI initiated a week-long performance entitled “Holding Palestine”, consisting of artists volunteering to hold the banner, two artists at a time holding it for an hour until the day finishes.