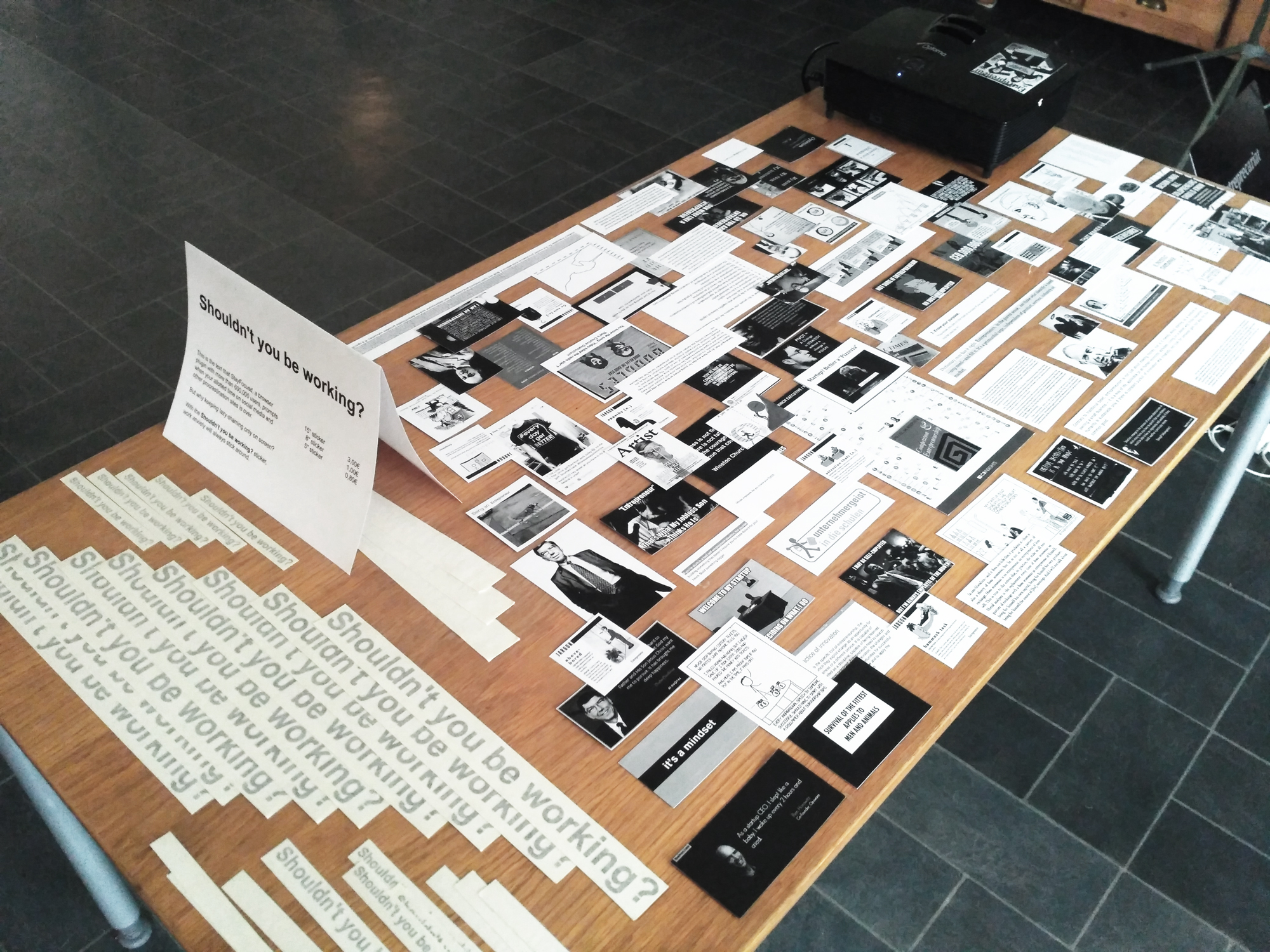 Last week I was in Oslo for a visit to the latest residency organized by PRAKSIS, a not-for-profit organization focused on developing creative practices. Conceived by "Famous New Media Artist" Jeremy Bailey and entitled The Artist Entrepreneur, the residency was an opportunity to critically tackle the adoption of the means of startup culture and venture capital to reconfigure artistic production, the main question being:

Should artists embrace, subvert or actively resist this new identity?

During my visit, I attempted to bring a complementary angle to the discussion, emphasizing the increasing diffusion of the imperative of creative entrepreneurialism among the non-creative class (an antonym hinting at the shortcomings of its positive referent). In other words, it is not just the artists that are required to adopt the forma mentis of entrepreneurs, but it is the average citizen that is urged to perform the "entrepreneurial meta-praxis" of a creative worker. We find the most striking manifestation of this assumption in the field of personal crowdfunding (online fundraising addressing personal issues like illness, unpaid internships, unexpected expenses, funerals, weddings, etc.) where the media literacy presumably typical of artists, designers and the like is a valuable asset. 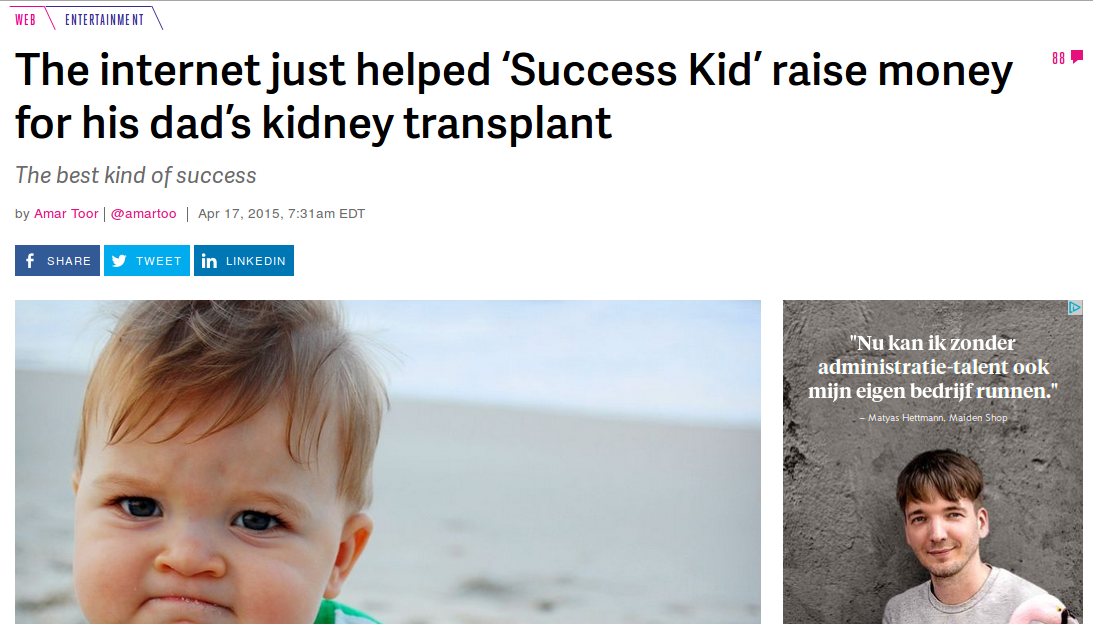 Whether the emphasis is on the artist turned entrepreneur or on the citizen turned creative entrepreneur, there is a direct resonance with the aesthetic and popular dimension of entrepreneurship. As far as I’m concerned, entrepreneurial propaganda constantly surrounds me: where I work, an applied sciences university, the walls are full of posters and murals promoting upcoming incubators, courses on lean methods, startup contests. 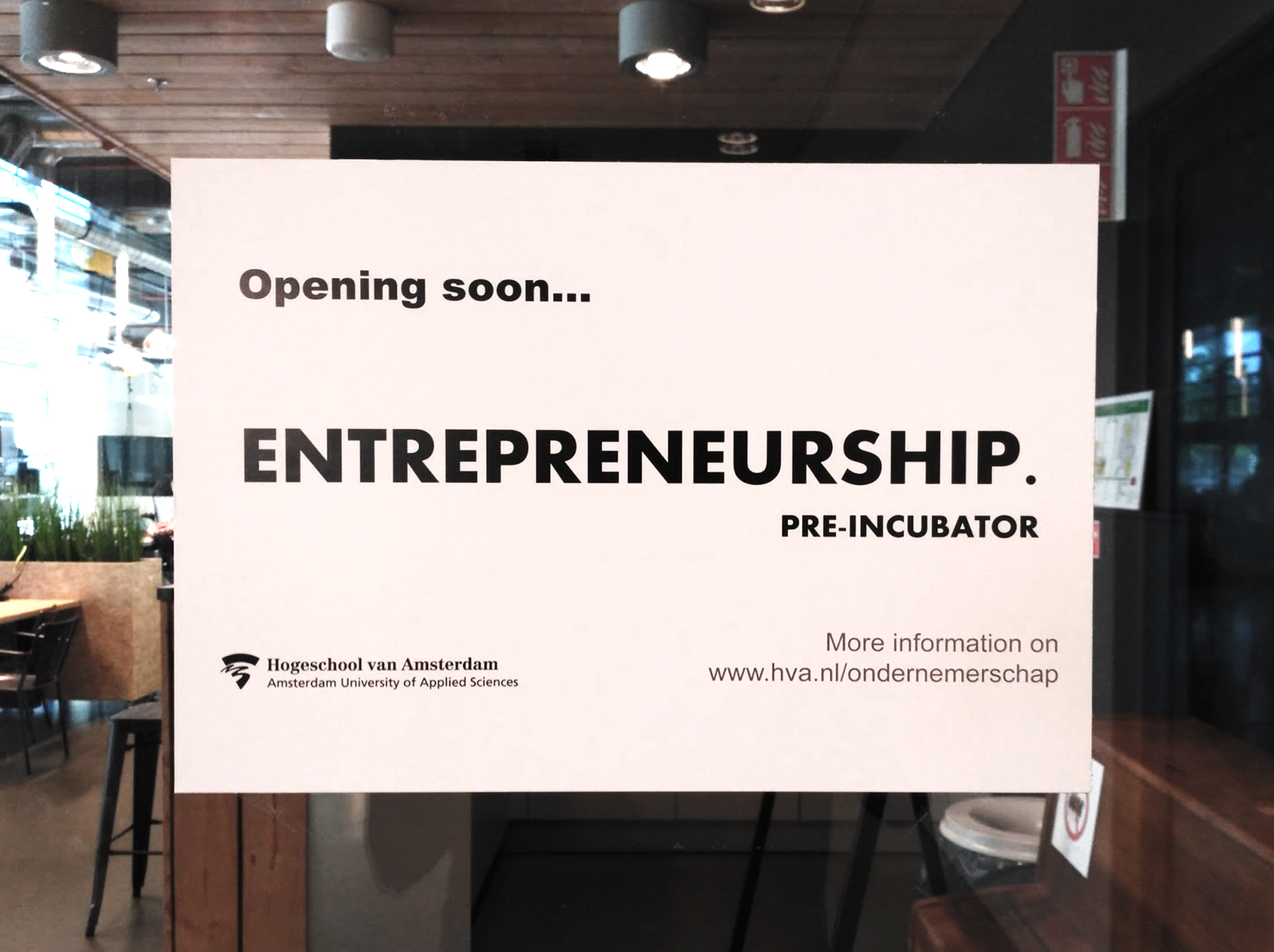 A friend recently asked me what I mean by ‘entrepreneurship’. As soon as I started to mention all these propagandistic artifacts, I realized that I was simplistically conflating this popular dimension with entrepreneurship at large. "What is an entrepreneur?" is not an easy question to answer. Formal dictionary definitions look somehow insufficient. According to the Oxford dictionary, an entrepreneur is "a person who sets up a business or businesses, taking on financial risks in the hope of profit." This definition doesn’t tell anything about the culture informing the entrepreneurial practice, a culture spilling out of the domain of business management. A useful distinction is the one between entrepreneurship and entrepreneurialism, the latter being "the spirit or state of acting in an entrepreneurial manner." In the following video, the natural curiousity of human beings substantiate the idea that we’re all entrepreneurs, that, like livestock, we’re all branded with ‘entrepreneurism’.

The term ‘entrepreneurism’ is borrowed from an eponymous 2002 book. Its premise, similar to the one articulated in Reid Hoffman’s The Startup of You, is that "contrary to traditional belief, entrepreneurism is not just about making money, nor is it merely about starting up a venture or owning a small business — it is a way of life, applicable to all human economic activities. Living on a planet with finite resources, humanity is sustainable only if there is constant pursuit of innovation and creativity, not just for personal gain but also for the common good." 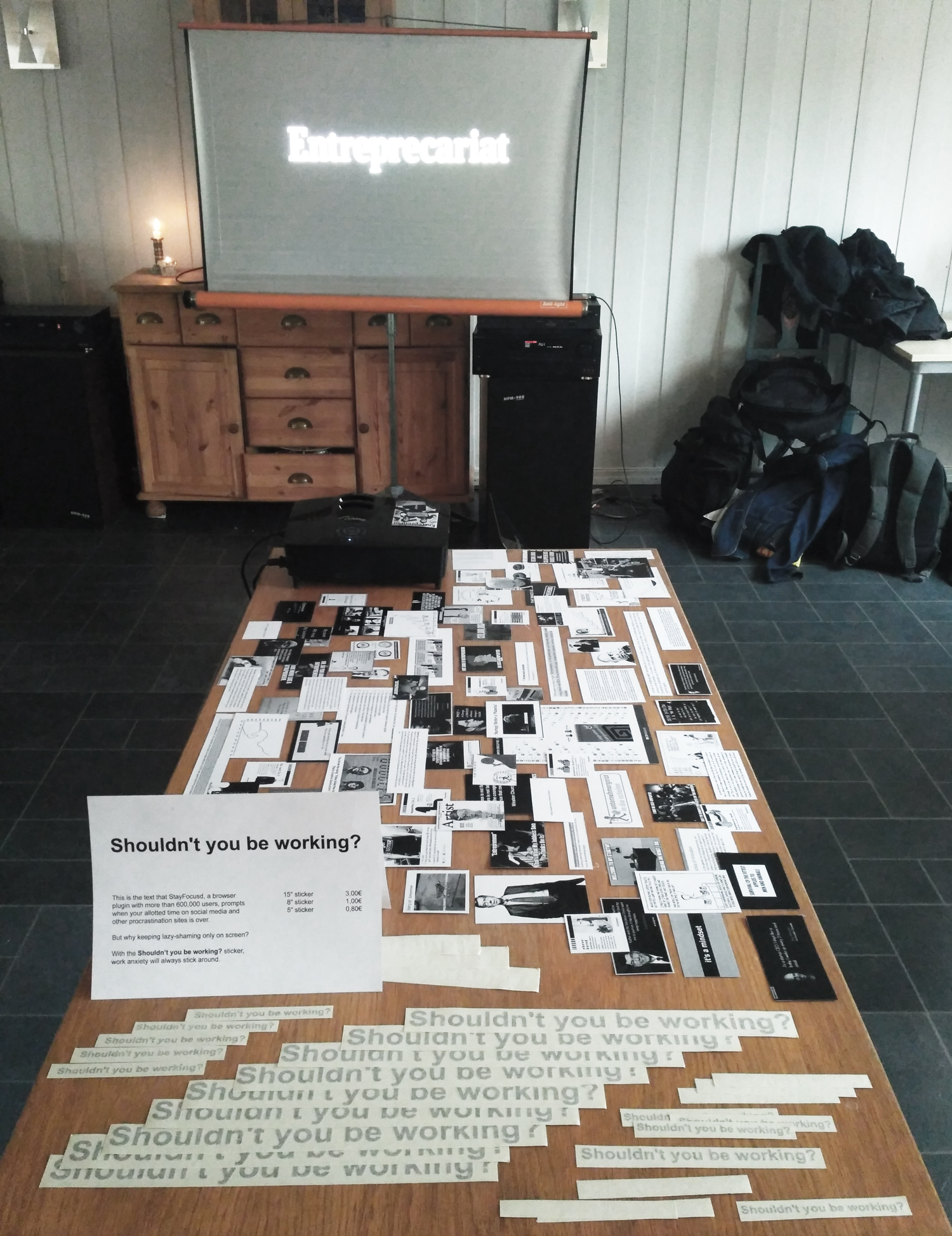 I decided to use my time at PRAKSIS to understand, at least tentatively, what entrepreneur(ial)ism looks like, what is the ‘vague neurological image’ conjured when the word entrepreneur is pronounced. In order to do this, I came up with the weird idea of collectively imagining "the teenage bedroom of the artist as a young entrepreneur". How would one decorate such bedroom? This format allows the juxtaposition of memes, snippets of theory, portraits of CEO, etc, forming together a sort of mnemosyne of entrepreneurial imagination.

Many things emerge from this mosaic, like the idea that entrepreneurs have peculiar neurological traits, behaviors or affects. This appears both in a Lombrosian phrenology of the entrepreneur (where the main area is dedicated to "the ability to create own reality") and in the theroetical model proposed by Israel Kirzner, who believes that ‘alertness’ is the fundamental quality of the entrepreneur. Among the several memes I included, many are dedicated to the notion of entrepreneur without a business, the "wantrepreneur" one might say. My favorite one is a dog pulling his own leash, symbolizing the necessary self-discipline and self-government required to be an entrepreneur. I also found out that Schumpeter, mostly known for his concept of ‘creative destruction, coined the term unternehmergeist, which literally means "entrepreneurial spirit". The notions of risk and uncertainty are also very frequent. Finally, one the artists in residence added a tweet posted that very day by Macron who sees France as "a nation that thnks and moves like a start-up". Here’s a little selection of the collected images, if you have interesting ones feel free to post them in the comments section. 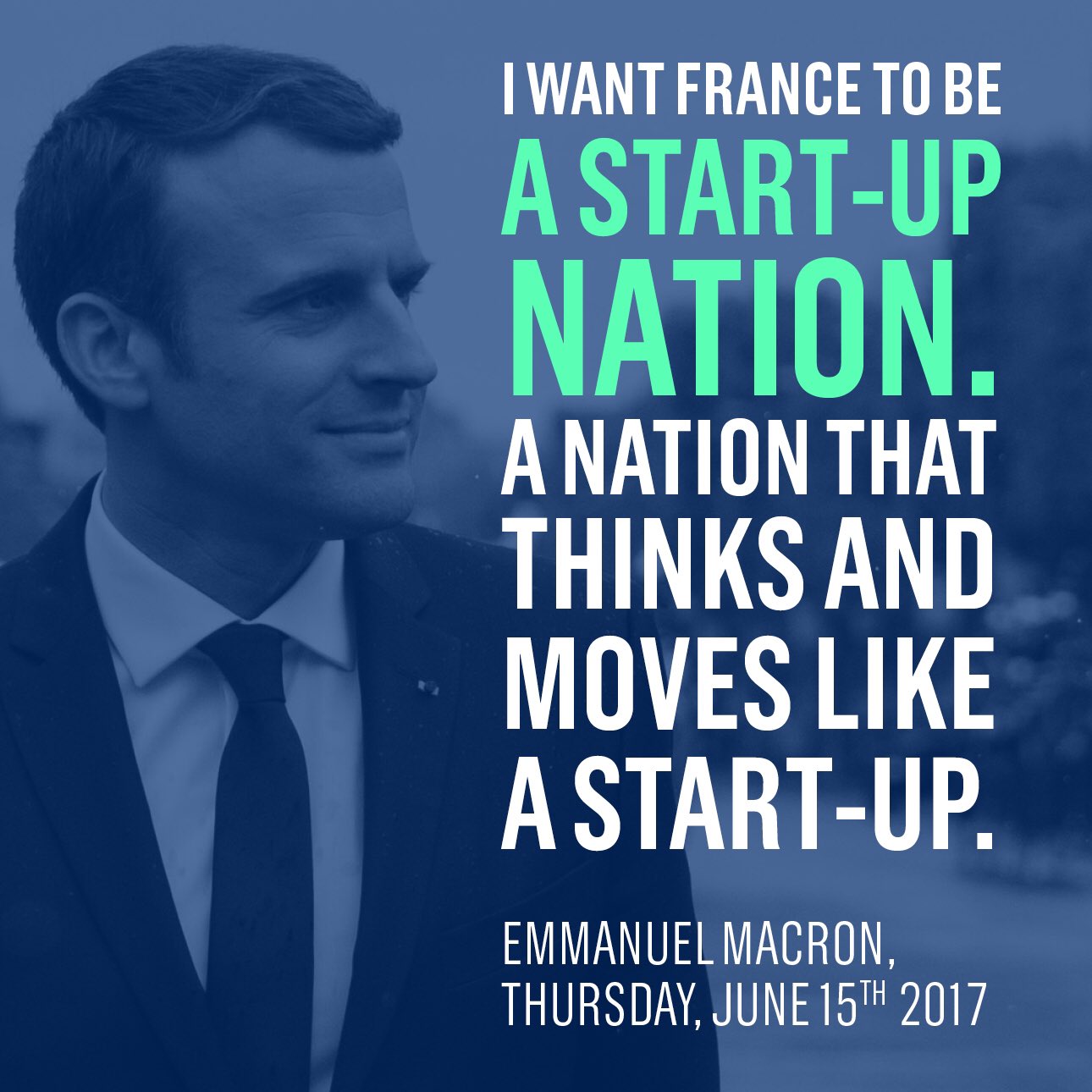 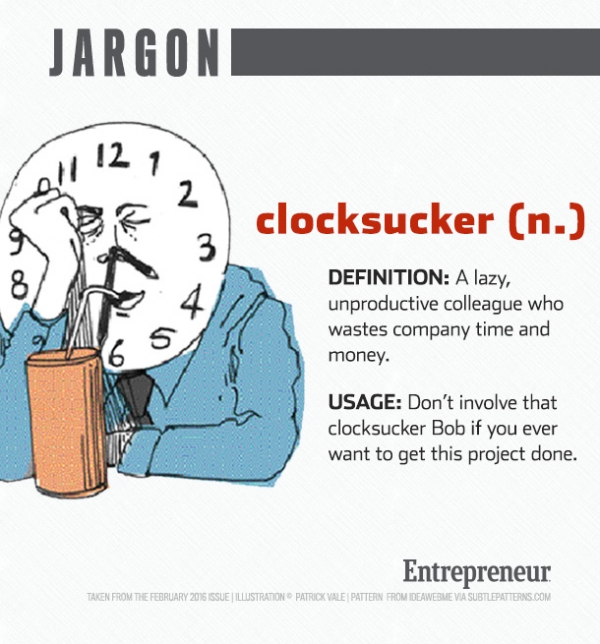 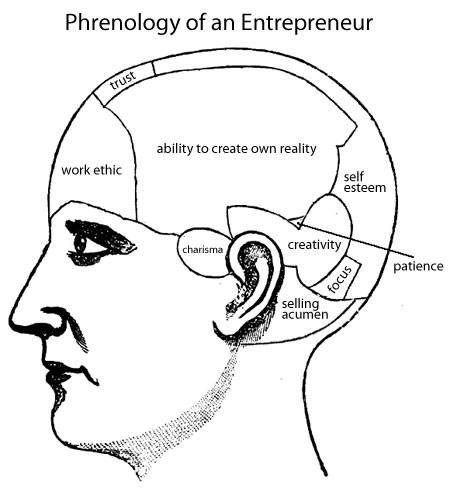 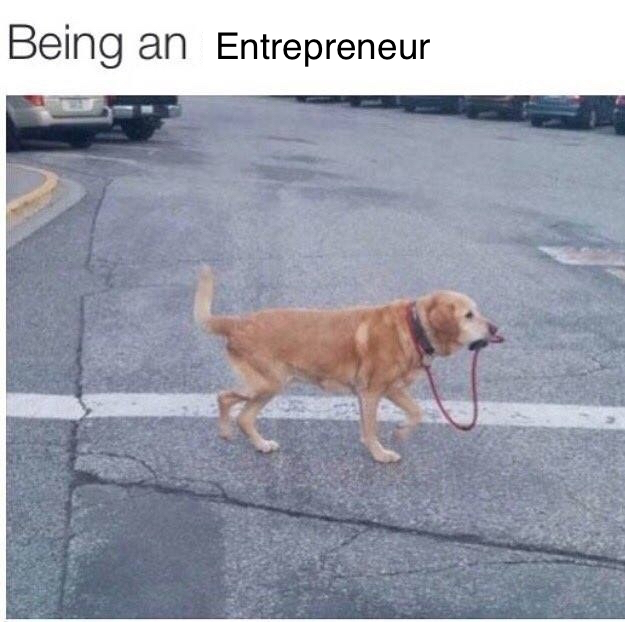 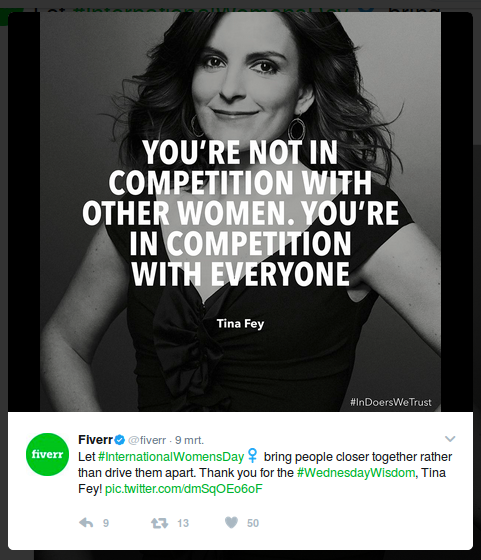 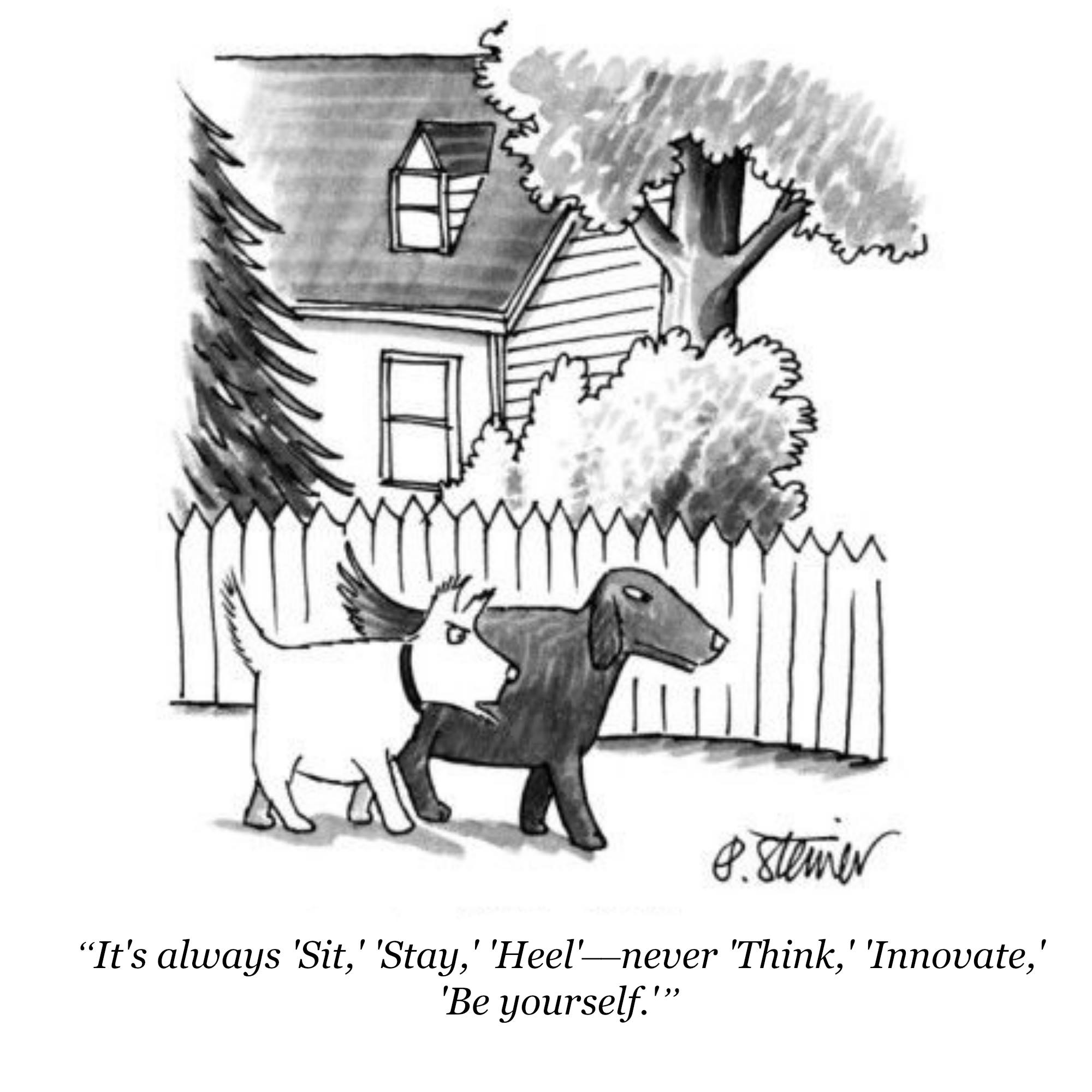 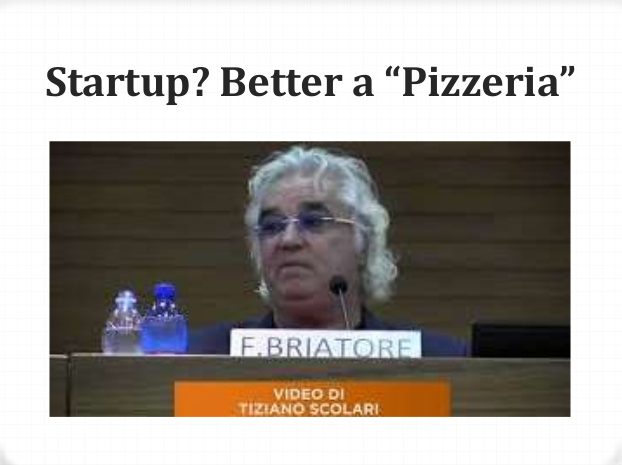