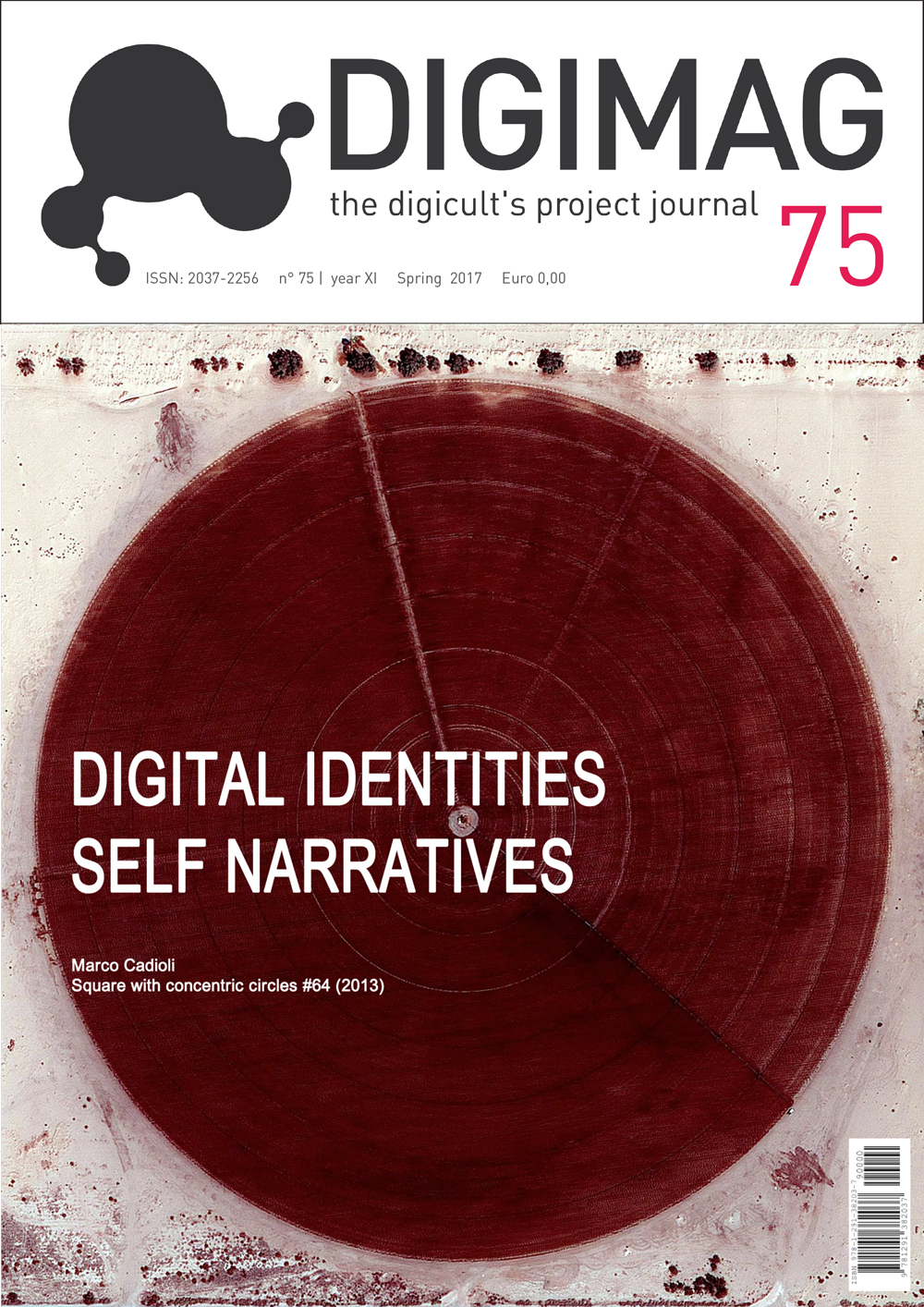 The Digimag Journal #75 on "Digital Identities and Self Narratives" is finally out. Curated by Silvia Bertolotti and Marco Mancuso, it includes an essay by Nicola Bozzi arising from an intense conversation I had with him on several entreprecariat-related issues. Nicola Bozzi, who is a writer and PhD researcher in Media and Cultural Studies at the University of Salford (Manchester), enriched my understanding of the entreprecarious dimension by linking it to his research focused on the circulation of stereotypical identities in the age of social media and big data. Specifically, we talked about digital nomads, throbblers, normcore, counterculture, bureaucracy and also of a series artworks realized together with Sebastian Schmieg. 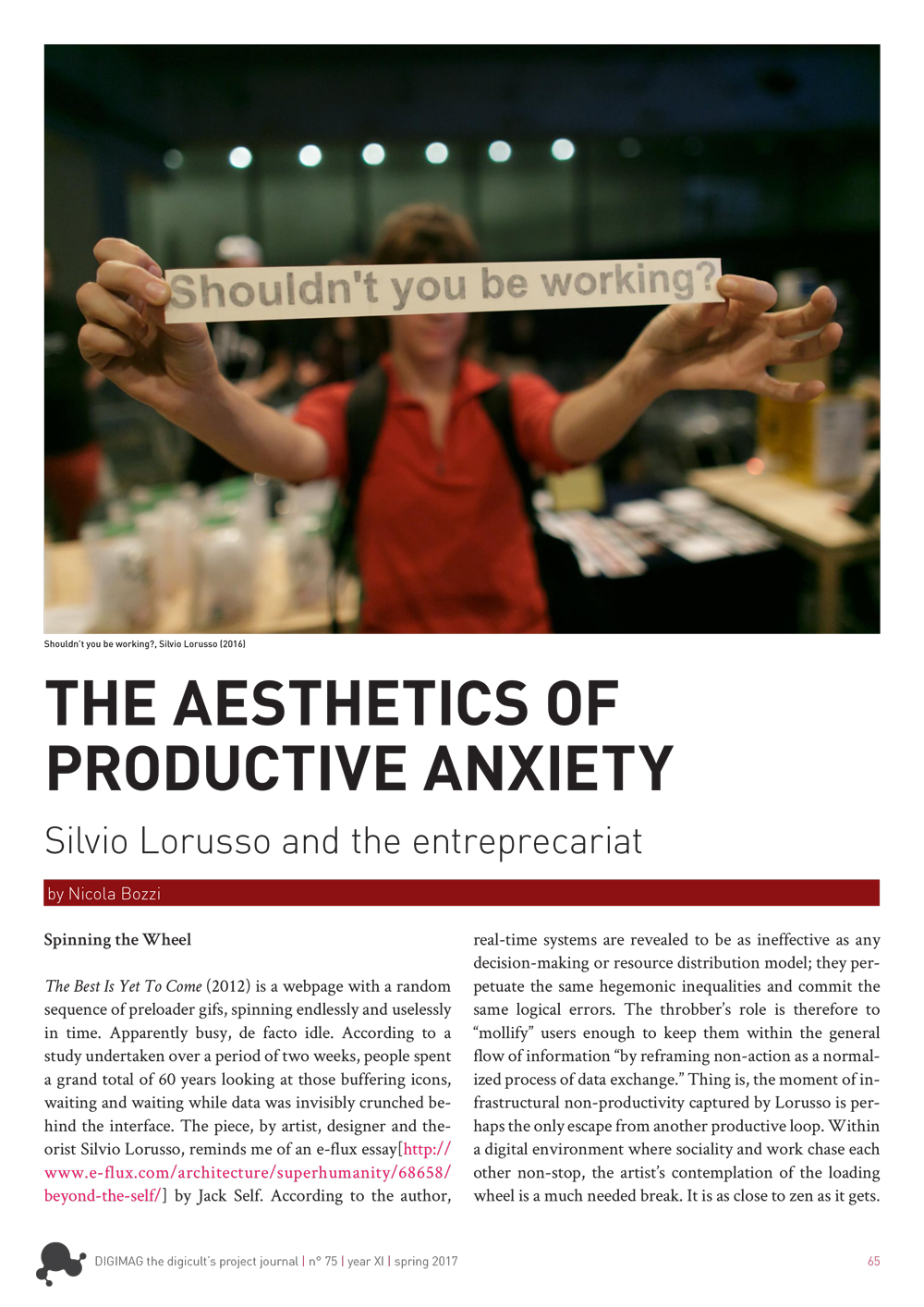 Below you find a few excerpt from the essay which is entitled "The Aesthetics of Productive Anxiety: Silvio Lorusso and the Entreprecariat." And don’t forget to download for free the whole issue here.

The Laws of Cool dedicates many pages to the analysis of management culture and pertaining literature. If the discipline has spilled over into all segments of society and is perceived as a universal cultural model, the new field of “identity management” becomes a sandbox for the simulation of diversity and the cultivation of personality as a professional asset. The removal of history is a crucial step in this direction: flattened within the modular flexibility of the “team” system, all cultural identities are equivalent and replaceable. Going back to the endlessly spinning wheel in Lorusso’s piece, the end of history declared by Francis Fukuyama and repeatedly disputed by, well, history, it’s at least a reality within the hypnotic suspension of a “best” that is, quite surely, not coming.

As many have tried defining the collective subject both me and Silvio are a part of – from Florida’s overly optimistic Creative Class to Bifo’s historically conscious Cognitariat, via the cultural stereotype of the Hipster – his simple conceptual reworking of “entrepreneur” and “precariat” is particularly fit for the aesthetics of his work, which combines glitch episodes with the self-deprecating irony of memes. The blog outlines an anatomy of the Entreprecariat by analyzing its most widespread phenomena – the distributed office, for example – and dissecting media objects like memes or ad campaigns.

Reflecting on the self-branding rhetoric of best-sellers like “The Startup of You and The Brand Called You”, as well as the networking platforms sustaining them (e.g. LinkedIn), Lorusso has been particularly effective in encapsulating the anxiety-inducing yet compulsively motivated predicament of the contemporary Foucauldian “enterprise- unit”. With Mark Fisher and Franco “Bifo” Berardi, Silvio argues for a union of the Entreprecariat around common problems such as depression and “feels”, adding a layer of meme-consciousness to it. […] The goal of the Entreprecariat research blog is thus to develop tools to ease coming out as precarious rather than being outed as such. “The Entreprecariat is my escamotage to do just that, with a degree of irony or dadaism, using something that has yet to be semanticized by the media.”

In terms of aesthetics, Silvio has an interesting idea about the office. “I think at the moment there is an emerging nostalgia towards the office. All these hip co-working spaces that are popping up everywhere are obviously a cool, hipster response to a logistical issue. However, the office had a sort of authority to it, against which you could develop some tactics. When you go to Starbucks it’s about you creating your own productive space. The freelancer becomes its own manager and space has a very important role. These spaces have become dystopian, they are full of social propaganda. A co-working space in Amsterdam, for example, is covered with slogans like: “Everybody should like everybody”, which remind me of the dystopian sci-fi novel by Dave Eggers, The Circle. The scary thing is dystopia and reality are not separate anymore, like in the ‘boring dystopia’ idea described by Mark Fisher. A dystopia that doesn’t shock anymore, which might even make you smile.” Funny enough, the same year the AirSpace article came out on the Verge a co-working space by the same name was launched – unironically, I presume – in London.

Professional, demographic or subcultural labels like Creative Class, Digital Nomad or Normcore put their own spin on the millennial/knowledge worker condition, herding desires and expectations towards competitive self-affirmation or resigned nihilism. Maybe Lorusso’s work on a collective subject to channel a more nuanced emotional cocktail could be an appropriate aesthetic strategy in a utopian direction. Creating such a collective subject could leverage the viral dynamics of contemporary communication, perhaps even the stereotypical approximation of memes, to harvest (socially) productive feelings.

“I think academia is the most affected by that type of anxiety,” Silvio tells me. “There is a Twitter account called Academic Pain and it deals with this issue, with some ironic detachment. People talk a lot about the memetic potential of the Alt-Right, and I think starting from that type of memetics, based on self-deprecation, is an interesting starting point. It would be useful to see who produces these memes and understand if they can become a flag for a movement.” Self-deprecation might feel a little to Seinfeldian, edging on Normcore, but what Lorusso is aiming for is a type of dialectic shock treatment. “Another thing I see is that schools, especially design schools, are strongly encouraged to take political positions and get involved,” he continues, “but paradoxically that could become problematic, with the risk of reducing activism to a 6-month project – working in a protected space, a sandbox for activism. Think of the 1977 movement: students were handing out flyers outside of factories, now it is much more atomized.” Instead of designer competitions to solve the world’s problems, then, an aesthetic strategy could be to renounce institutional cool altogether. “Perhaps the best thing for an enlightened school would be to go back to a grey, oppressive bureaucratic regime. I think that’s the dilemma of school as a space of organization. The greyness of brutalism, which is very cool now, is not something I wish for, but I wonder what it would engender. Perhaps a boring school would defeat the neoliberal compulsion towards self-optimization. We should aim towards boredom, bureaucracy, greyness.”