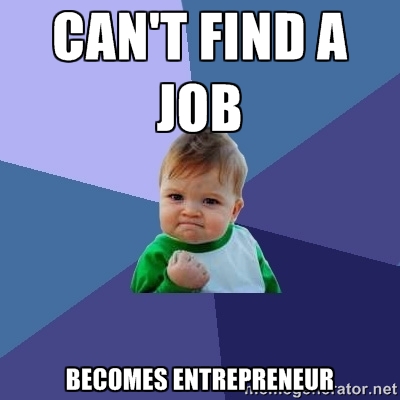 [This is an early version of a text that appears in an updated form in my book Entreprecariat: Everyone is an Entrepreneur. Nobody is Safe, which can be purchased here.]

I would like to tentatively explain what I mean by entreprecariat. More accurately, I wish to indicate some directions for this term, since I conceive it as a "force field", a set of crossing vectors, rather than a crystallized object. Entreprecariat is a portmanteau that combines entrepreneurialism and the precariat. As such, it captures both as coexisting axes of a semiotic square of the social.

On a basic level, the entreprecariat refers to the reciprocal influence of an entrepreneurialist regime and pervasive precarity. Entrepreneurship became a regime when it spilled out of strictly entrepreneurial jobs. Entrepreneurialism requires individuals to behave like entrepreneurs, even if they don’t have a company (a curator once told me that he works like a manager, but without the same paycheck). Similarly, precarity became paradigmatic of society at large, as a series of diverse yet analogous conditions. These are both material and immaterial, both real and perceived. Although, in a "risk society", perception has very tangible effects and, therefore, is somehow realer than reality. Both precarity and entrepreurialism are impalpable yet constitutive elements of the current social reality. They form the social atmosphere.

The entreprecariat is the semi-young creative worker who put effort in her own studio while freelancing for Foodora, the manager on the verge of a burnout, the employee who needs to reinvent himself as soon as his short-term contract is over, the fresh graduate who struggles to repay his loan with a top-notch university. As Guy Standing maintains, "the precariat consists of those who feel their lives and identities are made up of disjointed bits, in which they cannot construct a desirable narrative or build a career, combining forms of work and labour, play and leisure in a sustainable way."

But one can’t properly describe the precariat without referring to a genuine enthusiasm, sometimes of a euphoric kind, that often emerges from these conditions. This animation is fundamentally entrepreneurial, it’s a dynamic energy that demands to turn precarity into flexibility, at least at the level of perception. In the last decades, this attitude has been co-opted by the market and its needs, so it has been reduced to professional self-affirmation and the individual obligation to achieve it. Self-affirmation is an amalgam of vocation and economic management, it is thorough self-administration. Entrepreneuralism is a common response to the identity crisis of the precariat. Can this energy provide emancipation? This is the fundamental dilemma of the entreprecariat.

Thus, the entreprecariat is also the startupper successfully raising money from angel investors (I can’t avoid to think of Richard from the Silicon Valley show), the specialized professional who thrives in moving from one company to the other one, the artist who travels the world with residencies, the passionate academic who attends several international conferences every month.1 Yet, the ultimate goal of this upbeat entrepreneurialism is also stability, hence the spatial metaphor of position as social status.

All these characters share the urgency to optimize their time, their mind, their body, and their soul in order to deal with precarious conditions, be they financial, psychological, affective, physiological, temporal, geographical. Lifehacker.com well represents this urgency, since it offers optimization techniques encompassing everything, from the work sphere to life as a whole. In the entreprecarious society, everyone is an entrepreneur and nobody is stable. Precarious conditions demand an entrepreneurial attitude, while affirmative entrepreneurialism dwells into constructive instability and change. Thus, entreprecarity is characterized by a cognitive dissonance.

Yet, the entreprecarious condition is a privileged one, as only a minority of precarious workers are allowed to have realistic entrepreneurial ambitions in the strict sense. For the rest, the entreprecariat signals the fusion of economics and politics, or, more precisely, the dissolution of politics into economics: the structural precarity that politics is not able to prevent is reframed into a call to action for individuals to market themselves.

The entreprecarious mindset is predominantly built on the level of language. We hear that "the ladder is jammed" but "everyone has a chance to stand out". Fear and hope are conveyed at the same time. Phrases apparently descriptive are actually commanding. Take the notion of "personal branding", the idea of "investing in yourself", or the plethora of athletic metaphors we employ. A case in point is the concept of failure. Beckett famously declared: "Ever tried. Ever failed. No matter. Try Again. Fail again. Fail better." With this, he meant that "there’s no such thing as success. It’s failure all the way down". But nowadays, failure itself becomes instrumentalized, a necessary tool to achieve success, and Beckett’s maxim is converted into a motivational platitude. The injection of entrepreneurialism into every aspect of life is blatantly reflected in epithets like "momtrepreneur", whom, before becoming one, was merely an "underutilized asset". But here we also see the liberating potential of entreprecarious language: "momtrepreneur" literally construct a reality in which a mother can be an entrepreneur. Why not just "entrepreneur", then? Because in the long tail of micro-entreprenurial practices, specificities and niches are taken into account ("kidtrepreneur" also exists).

The entreprecarious condition is characterized by a subordinate relationship with time. Plenty of suggestions on how to master time are discussed every day, as a reaction to the fact that time is our master. No subjective temporalities survive, since time itself is turned into schedule. Deadlines become the most concrete temporal construct we can relate to. A whole techno-social apparatus emerges around entreprecarious time. The goal is efficiency: time-tracking and getting-things-done app with utopian names like Freedom abound. These apps often mirror the internalized practice of lazy-shaming ("Shouldn’t you be working?") Entreprecarity incarnates the epitaph of circadian rhytms: it means working in bed and sleeping at the desk. We speak of "quality time" because we intuitively realize that what we experience is junktime, time that is, as Hito Steyerl puts it, "wrecked, discontinuous, distracted and runs on several parallel tracks." But entreprecarious time also overcomes the dreadful eight hours tripartition, a rigid division of activity that reflects an obsolete division of labor. It is time tailored on individuals, who are often more bossy than their bosses.

For the entreprecariat work is central. Work ethic is the horizon where to look for a sense of purpose (this is why leisure is terrifying for many). Work is performed as if it was a parody, with its own obsessive refrains ("I’m so busy!"). And when busyness is the norm, laziness looks suspicious. Work is so central that hard work is often required in order to work harder: think of all the hope labor put in cover letters, CVs, applications without a certain result. The entreprecariat also signals the identification between work and passion. The gratification provided by being what you do is not delayed. From time to time, the entreprecarious worker has fun at work. Personality needs to be tweaked as well: while more and more jobs require "social skills", the general obligation is to hack your mood to fit the task at hand. Often, this means exuding approachability. The centrality of work requires a constant work on the self.

The entreprecariat recklessly colonizes the space around it, and the space adapts. More and more places are converted into informal, temporary offices: cafes, bars, public libraries, airports, hotel rooms… even bathrooms. Simultaneously, offices incorporate facilities for relaxation, entertainment and sociability: take a nap in the pod, call your wife from the private conversation room, play table tennis with your colleagues, have a Mohito at the free bar before going home. But productivity is still king, therefore apps and patents are developed to photoshop reality away, perceived as external noise.

Entreprecarious scholars, activist, designers, artists, and researchers, labeled as such since entreprecarity is both their subject of study and their condition, read both Michel Foucault and Tony Hsieh. They’re aware of the concrete impact of novel techno-entrepreneurial mantras like "agility". They know that they do not only affect the administration of companies, but also the imagination and behavior of individuals. They understand that, in the entreprecarious world, motivational slogans and management keywords are the ultimate form of bliss.

According to Guy Standing, "the global precariat is not yet a class in the Marxian sense, being internally divided and only united in fears and insecurities. But it is a class in the making, approaching a consciousness of common vulnerability". Similarly, the entreprecariat is a category under construction. And, as such, it can and should be oriented. The entreprecariat can reclaim pleasure and foster solidarity. It can rediscover empathy and protect conviviality. It can reappropriate time and differentiate it. It can pivot identity out of career and reduce the burden of work ethic. It can and should enlarge our short intention spans to build a common understanding of what stability might mean today.

How to do so? The short-term objective is externalization: entreprecarity is first and foremost a worldview, an interpretation of reality that orients our behaviors. This worldview, that is at once embedded in the technological apparatus and incorporated by individuals, should be externalized. Precarity is hidden and disguised. It’s not a label people use to define themselves. While in the Netherlands "the precariat" is mostly an academic term, in Italy the term is constantly used by news media with a not-so-veiled negative emphasis. You don’t hear people say "I’m a proud member of the precariat". In order to tackle precarity, openness and social cohesion are necessary. The term "precariat" doesn’t work because it doesn’t produce a gratifying sense of belonging.

We need irony and sarcasm to recombine our collective understanding of precarious conditions. Nick Srnicek and Alex Williams maintain that "changing the cultural consensus about the work ethic will mean taking actions at an everyday level, translating these medium-term goals into slogans, memes and chants." Mocking the daily grinds of self-entrepreneurship and bitingly diagnosing the miseries of precarity, the entreprecariat must produce its own slogan, memes and chants.

A novel series of tactics needs to be developed, but the fundamental mission is one: to construct solidarity under externalized precarity in order to reclaim agency. An ironically-detached, self-reflexive entrepreneurialism can help. I hope that the term "entreprecariat" will become a constructing site cohabited by complementary, even conflicting, perspectives. In order to grow into a solid concept, it needs to catalyze ambiguity. As in the narrative it refers to, it needs to be flexible and adaptable, or, if you like, in "permanent beta". The entreprecariat must be able to be one thing and its opposite, it must incarnate the social and individual contradictions we live by.

2 thoughts on “What is the Entreprecariat?”