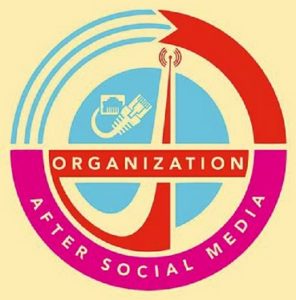 We would like to invite you all for the booklaunch of

The discussion will be chaired by Thomas Poell (UvA, Mediastudies), with responses by Lonneke van der Velden and activists from various political initiatives, such as Harriet Bergman from Code Rood, who discuss how dominant social media are used by current social movements and what alternative mobilization and communication channels are being used.

—the book will be for sale at the event—

Organized networks are an alternative to the social media logic of weak links and their secretive economy of data mining. They put an end to freestyle friends, seeking forms of empowerment beyond the brief moment of joyful networking. This speculative manual calls for nothing less than social technologies based on enduring time. Analyzing contemporary practices of organization through networks as new institutional forms, organized networks provide an alternative to political parties, trade unions, NGOs, and traditional social movements. Dominant social media deliver remarkably little to advance decision-making within digital communication infrastructures. The world cries for action, not likes.

Organization after Social Media explores a range of social settings from arts and design, cultural politics, visual culture and creative industries, disorientated education and the crisis of pedagogy to media theory and activism. Lovink and Rossiter devise strategies of commitment to help claw ourselves out of the toxic morass of platform suffocation.

Geert Lovink is a media activist and theorist, internet critic and author of Uncanny Networks (2001), Dark Fiber (2002), My First Recession (2003), Zero Comments (2007), Networks Without a Cause (2012) and Social Media Abyss (2016). He is the founder of the Institute of Network Cultures at the Amsterdam University of Applied Sciences (HvA) and teaches at the European Graduate School in Saas Fee/Malta.

Ned Rossiter is Professor of Communication in the Institute for Culture and Society with a joint appointment in the School of Humanities and Communication Arts, Western Sydney University. He is the author of Organized Networks: Media Theory, Creative Labour, New Institutions (2006) and Software, Infrastructure, Labor: A Media Theory of Logistical Nightmares (2016).

Lonneke van der Velden is a postdoctoral researcher at DATACTIVE: the politics of data according to civil society and teaches at the New Media and Digital Culture program at the UvA. The DATACTIVE project investigates critical responses to, and engagements with, mass data collection. She is part of the editorial board of Krisis, journal for contemporary philosophy in the Netherlands and is on the Board of Directors of the Dutch digital rights organisation Bits of Freedom.

Harriet Bergman graduated on a thesis on Hope and Social Movements at the University of Amsterdam. She is actively involved in the climate justice platform Code Rood and was part of the student occupations of 2015. She is a public speaker, coach and gives media trainings.

Thomas Poell is Senior Lecturer in New Media & Digital Culture and Program Director of the Research Master Media Studies at the University of Amsterdam. He has published on social media and popular protest in Canada, Egypt, Tunisia, India, and China, as well as on the role of these media in the development of new forms of journalism. His co- authored and co-edited books include Global Cultures of Contestation (Palgrave/McMillan, 2017), The Sage Handbook of Social Media (Sage, 2018), and The Platform Society (Oxford University Press, 2018).