AFTER CHIMERICA
ART AND BIOREGIONALISM IN THE ANTHROPOCENE 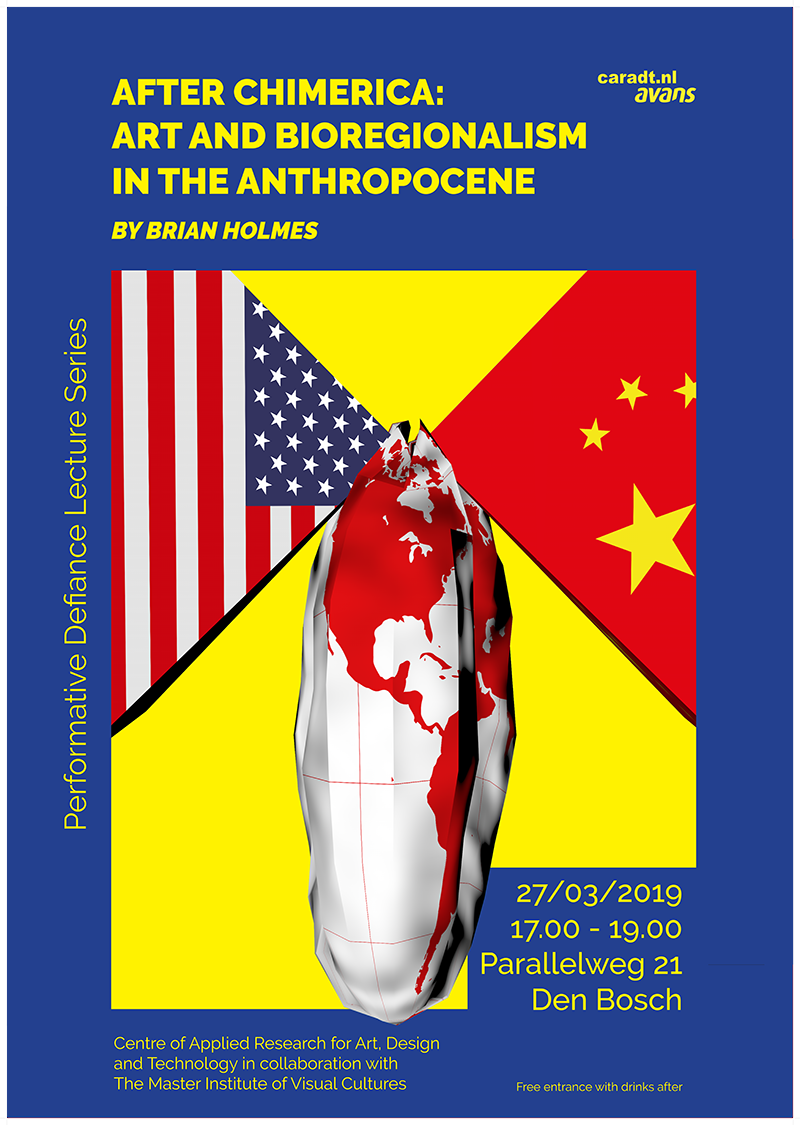 For decades, global growth was sustained by an uncanny illusion: underpaid Chinese workers produced the incredibly cheap goods that unemployed Americans consumed, while the Chinese Communist government financed the whole thing by purchasing US Treasury bonds. This unlikely construction, known to economists as “Chimerica,” has clearly reached its limit. What comes after the culture of gadgetry and cheap consumption? How to orient ourselves toward a viable future?

In this first public lecture of the series, Brian Holmes uses on-the-ground research to explain the geopolitical shift caused by the 2008 financial crisis. At a more intimate scale, he shows how the dead end of neoliberal economics led to a transformation in his own practice. Leaving the stance of theorist for that of artist, he opens up ecological inquiries in the Mississippi river watershed, in the Paraná Delta of Argentina, and on the Pacific coast of North America. The aim is to discover a new framework, the bioregional state, where the destinies of non-humans can be taken into account at formal negotiating tables. Such a metamorphosis cannot simply be legislated. First it has to take place at heart of aesthetic experience.

Brian Holmes is a cultural critic and self-taught cartographer, living in the US for the last decade after some twenty years in France. He’s known for his art criticism and his theoretical work on global capitalism, which he now pursues as an artist, since there’s no concept of “autonomous theorist” in the USA. He’s a greybeard of the mailinglist nettime, collaborates with the Compass Group and Deep Time Chicago in the US, and more recently with Casa Río in Argentina. His current production swings between the magnetic poles of geography, geopolitics, earth science and tactical media, with a strong influence from the Anthropocene Campus program at HKW Berlin. For more information, http://ecotopia.today

The Performative Defiance Lecture Series is organised by Prof. Sebastian Olma and Úna Henry, and is an initiative of the Centre for Applied Research in Art, Design & Technology (Caradt, Avans) in collaboration with the Master Institute of Visual Cultures, St.Joost School of Art and Design.

Check out the event page for more information!