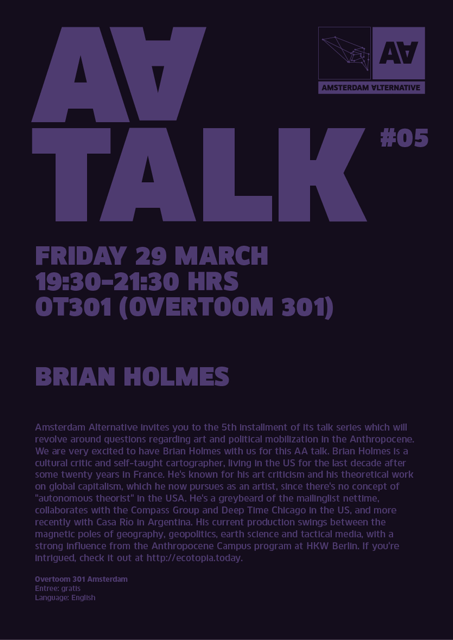 Amsterdam Alternative invites you to the 5th installment of its talk series which will revolve around questions regarding art and political mobilization in the Anthropocene.

We are very excited to have Brian Holmes with us for this AA talk. Brian Holmes is a cultural critic and self-taught cartographer, living in the US for the last decade after some twenty years in France. He’s known for his art criticism and his theoretical work on global capitalism, which he now pursues as an artist, since there’s no concept of “autonomous theorist” in the USA. He’s a greybeard of the mailinglist nettime, collaborates with the Compass Group and Deep Time Chicago in the US, and more recently with Casa Río in Argentina. His current production swings between the magnetic poles of geography, geopolitics, earth science and tactical media, with a strong influence from the Anthropocene Campus program at HKW Berlin. If you’re intrigued, check it out at http://ecotopia.today.

In the new issue of Amsterdam Alternative, Brian has written an article that provides some background info on his talk titled Flash Drive: The Road to Anthropocene Socialism.

For the discussion, he’ll be joined by local activist groups as well.