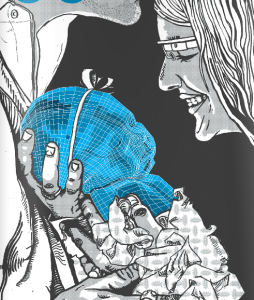 (Ned Rossiter and I wrote a piece on ‘organized networks’ for the technology special of Occupied Times (#23). Here it is. The URL: http://theoccupiedtimes.org/?p=12547)

Sloganism for late 2013: “I feel protected by unpublished Suite A algorithms.” (J. Sjerpstra) – “I am on an angry squirrel’s shitlist.” – Join the Object Oriented People – “When philosophy sucks—but you don’t.” ­– “See you in the Sinkhole of Stupid, at 5 pm.” – “I got my dating site profile rewritten by a ghost writer.” – “Meet the co-editor of the Idiocracy Constitution” – The Military-Entrepreneurial Complex: “They are bad enough to do it, but are they mad enough?” – “There really should be something like Anti-Kickstarter for the things you’d be willing to pay to have not happen.” (Gerry Canavan) – Waning of the Social Media: Ruin Aesthetics in Peer-to-Peer Enterprises (dissertation) – “Forget the Data Scientist, I need a Data Janitor.” (Big Data Borat)

If we look back at the upheavals from the past years (2011-2013) we see bursts of  ‘social media’ activity. From Tahir to Taksim, from Tel-Aviv to Madrid, from Sofia to Sao Paolo, what they have in common is communication peaks, which fade away soon after the initial excitement, much in line with the festival economy that drives the Society of the Event. Corporate social networking platforms such as Twitter and Facebook are considered useful to spread rumors, forward pictures and reports and comment on established media (incl. the Web). But no matter how intense the street events may have been, they often do not go beyond ‘short ties’. As temporary autonomous spaces they feel like carnevalist ruptures of the everyday life. Revolts without consequences?

There is growing discontent over the event-centered movements. The question how to reach a critical mass is essential here. How can we get over the obvious statements about the weather and other meta fluctuations (from Zeitgeist to astrology).  Instead of contrasting the Leninist party model with the anarcho-horizontalist celebration of the general assembly, we propose to integrate the general network intellect into the organization debate. We’ve moved a good 150 years since the Marx-Bakunin debates. It is time to integrate technology into the social tissue and no longer reduce computers and smart phones to broadcasting devices. The organized networks model that we propose is first and foremost a communication tool to get things done. We are aware that this proposal runs into trouble once (tens of) thousands of users are getting involved. This is the state of exception when the Event takes over. What we need to focus in the years to come is time-in-between, the long intervals when there is time to build sustainable networks, exchange ideas, set up working groups and realize the impossible, on the spot.

Today’s uprisings no longer result from extensive organizational preparations in the background, neither do they produce new networks of ‘long ties’. What’s left is a shared feeling: the birth of yet another generation. Even though small groups have often worked on the issues for many years, their efforts are usually focused on advocacy work, designing campaigns, doing traditional media work or being focused on those who are immediately affected by the crisis on the ground. Important work, but not precisely about preparing for the Big Riot.

Is it wishing too much to long for sustainable forms of organization when the world seems to be in perpetual flux? Very little stability defines labor and life as we know it. Ideologies have been on the run for decades. So too are political networks amongst activists. At best we can speak of a blossoming of unexpected temporary coalitions.

We can complain about social media causing loneliness but without a thorough re-examination of social media architectures, such sociological observations can easily turn into forms of resentment. What presents itself as social media critique these days often leaves users with a feeling of guilt, with nowhere to go, except to return to the same old ‘friends’ on Facebook or ‘followers’ on Twitter.

The orgnet concept (short for organized networks) is clear and simple: instead of further exploiting the weak ties of the dominant social networking sites, orgnets emphasize intensive collaborations within a limited group of engaged users. The internet’s potential should not be limited to corporate platforms that are out to resell our private data in exchange for free use. That option gives you silos ripe for NSA raids.

Orgnets are neither avant-garde nor inward-looking cells. What’s emphasized is the word ‘organ’. With this we do not mean a New Age-gesture of a return to nature or a regression into the (societal) body. Neither is a reference to Aristocle’s six volume work called Organon. Even less is it refers to the tired notion of the ‘body without organs’ (or Zizek’s reversal, for that matter). The organ of orgnets is a social-technical device through which projects are developed, relations built and interventions made. Here, we are speaking of the conjunction between software cultures and social desires. Crucial to this relation is the question of algorithmic architectures, something largely overlooked by many activist movements who adopt – in what seems a carefree manner – commercially motivated and politically compromised social media software such as Facebook, Twitter and Google+.

As much as mainstream social media platforms come with an almost guaranteed capacity to scale as mass networking devices, they are not without serious problems that many are now familiar with: security of communication (infiltration, surveillance and a wilful disregard of privacy), logic or structure of communication (micro-chatting among friends coupled with broadcasting notices for the many subscribed to the cloud), and an economy of ‘free labour’ (user generated data, or ‘the social production of value’).

While there has been some blossoming of social media alternatives such as Lorea <lorea.org>, which is widely used among activists in Spain, other efforts such as Diaspora ended quite disastrously after successful raising $200,641 in development funds through Kickstarter but failing to gain widespread traction among activists, until an overall implosion of the project after one of its founders committed suicide. The increasing migration of youngsters to Instagram (a subsidiary of Facebook) and Snapchat was probably inevitable (irrespective of whether the NSA leak happened or not). But as April Glaser and Libby Reinish note in a recent Slate column, these social media alternatives “all use centralized servers that are incredibly easy to spy on.”[1]

Current social media architectures have a tendency to incite passive-aggressive behaviour. Users monitor, at a safe distance, what others are doing while constantly fine-tuning their envy levels. All we’re able to do easily is to update our profile and tell the world what we’re doing. In this ‘sharing’ culture all we can do is display our virtual empathy. ‘She really ain’t all that. Why does all the great stuff happen to her and not me?’ Organized networks radically break with the updating and monitoring logic and shift the attention away from watching and following diffuse networks to getting things done, together. There is more in this world than self-improvement and empowerment. What network architectures need to move away from is the user-centered approach and move towards a task-related design undertaken in protected mode.

Three months into the Edward Snowdon/NSA scandal Slavoj Žižek wrote in The Guardian “we need a new international network to organise the protection of whistleblowers and the dissemination of their message.”[2] Note that the two central concepts of our argument are utilized here: a network that organizes. Once we have all agreed on this task it is important to push the discussion further and zoom in on the organizational dimension of this timely effort. It can be an easy rhetorical move to emphasise what has already been tried, but we nonetheless need to do that.

One of the first observations we need to make is how Anonymous is the missing element in Žižek’s list of Assange, Maning and Snowdon. Despite several setbacks Anonymous remains an effective distributed effort to uncover secrets and publicize them, breaking with the neo-liberal assumption of the individual as hero who operates out of a subjective impulse to crack the code in order to make sensitive material public. The big advance of anonymous networks is that they depart from the old school logic of print and broadcasting media that needs to personalize their stories, thereby creating one celebrity after the other. Anonymous is many, not just Lulzsec.

We also need to look into the many (failed) clones of WikiLeaks and how specific ones, such as Balkan Leaks, manages to survive. There is GlobaLeaks and the outstanding technical debate about how to build functioning anonymous submission gateways. It has already sufficiently been described that WikiLeaks itself is a disastrous model because of the personality cult of its founder and editor-in-chief, Julian Assange, whose track record of failed collaborations and falling-outs is impressive. Apart from this ‘governance’ debate, we need to look further into the question of what the ‘network’ model, in this context, precisely entails. A step that WikiLeaks never dared to take is the one of national branches, based either in nation states or linguistic territories.

To run a virtual global advocacy network, as Žižek suggests, looks sexy because of its cost-effective, flexible nature but the small scale of these Single Person Organizations (SPOs) also makes it hard to lobby in various directions and create new coalitions. Existing networks of national digital civil rights organisations should play a role here, yet haven’t so far. And it is important to discuss first why the US-organization EFF, the European Digital Rights network or the Chaos Computer Club for that matter have not yet created an appealing campaign that makes it possible for artists, intellectuals, writers, journalists, designers, hackers and other irregulars to coordinate efforts, despite their differences. The same can be said of Transparency International and Journalist trade unions. The IT nature of the proponents seems to make it hard for existing bodies to take up the task to protect this new form of activism.

Networks are not goals in themselves and are made subordinate to the organizational purpose. Internet and smart-phone based communication was once new and exciting. This caused some distraction but that’s soon going to be over. Distraction itself is becoming boring. The positive side of networks (in comparison to the group) remains its open architecture. However, what networks need to ‘learn’ is how to split-off or ‘fork’ once they start getting too big. At this point networks typically enter the danger-zone of losing focus. Intelligent software can assist us to dissolve connections, close conversations and delete groups once their task is over. We should never be afraid to end the party.

[1] April Glaser and Libby Reinish, ‘How to Block the NSA from your Friends List’, Slate, 17 June, 2013, http://www.slate.com/blogs/future_tense/2013/06/17/identi_ca_diaspora_and_friendica_are_more_secure_alternatives_to_facebook.html