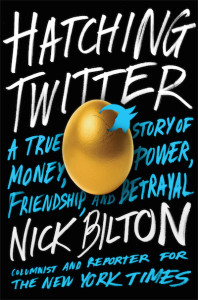 In 2012, when Twitter was true and well established, and on its way to its IPO, one of the founders, Evan Williams, asked his partner “How can we raise our children to never act this way? How can we raise them to be honest and caring?” After having read  Twitter’s biography, it makes you wonder how this so-called digitally-native generation has become so sick, so immature, lacking even the most basic ideas, without any vision. Venturing for the sake of it. Accordingly, ‘Hatching Twitter’ by NYT reporter Nick Bilton is void of any idea. No debates, no concepts, no code philosophy, just clashing personalities. After 300 pages of Ego Theatre one can only conclude that the slogan of this (post-) dotcom scene will have to be: Make Bigger Mistakes Tomorrow.

For internet researchers this account is utterly worthless, unless you are interested into anthropological stories about so-called enterpreneurs that are caught up in some heroic Darwinistic struggle between mediocre existences. If you think Marc Zuckerberg is dull, then meet the board of directors of Twitter. They are not even geeks a la 4chan and Reddit.

Which role Twitter exactly has played in the 2011 uprisings? Zero information. Heated debated about Twitter’s relation with the US-news industry? Never heard of. The controversies over ‘trending topics’. On page 123 the two visions of Twitter, ego status updater vs. newswire are mentioned in one sentence. That’s it. Even the most-often raised question why tweets were, back then, limited to 140 characters remains unmentioned. I learned more about Twitter politics from the countless postings of Dave Winer on his Scripting blog than from this book. We all know that Silicon Valley is a deeply troubled place when it comes to human relationships. The devastating influence of the venture capital ideology is to blame here. This is the common belief system that all antagonists share.

We don’t need more Hollywood films on the topic of the Selfish Geek & His Social Media. One Facebook film will do. There must be more that can be said about the media philosophy behind Twitter: the real-time addiction of many, the updating mania, the retrograde return to old school news outlets and the role Twitter is playing in the struggle to survive by mainstream media, the role of the PR in pumping up Twitter, its political economy, the recommendation industry behind it all, the harvesting of data, and so on.

Unless you are interested in an average start-up tragedy, free of any background and bigger picture, forget Hatching Twitter.