Simone Paliaga: The English title of your book is “Sad by Design”. Why do you talk about programmed sadness and melancholy? Can you explain the reason of the word “design”?

Geert Lovink: In these harsh neo-liberal times of precarity and growing inequality, many suffer from loneliness, depression and burn-out. Particularly young people are quite open about their insecurities and vulnerable states of mind. They are on social media 24/7. I started to bring these two conditions together and discovered ’technological sadness’ as a thin and flat, non-medical condition, comparable to boredom. When it has all been too much we break down and mourn for a brief moment. We can no longer bear to wait for the other. Years ago I wrote about the ‘psycho-pathology of information overload’, much in the same line as Franco Berardi. This all accelerated in 2017 when Silicon Valley dissidents came out with confessions how they emotionally manipulated users with their software design. They searched for ‘human exploits’ with their like buttons that deepened our dependencies of the devices through the perceived presence of online others that are dear to us, using likes, time indicators and signs that others read a messages yet did not respond. This is what makes us sad. We need a break but we can’t. We put the phone away—and a moment later grab it back. Did he respond?

SP: How do new media affect everyday life? What are their consequences?

GL: We need phones to coordinate our busy lives. Besides that, we are engaged with the world, the Notre Dame fire, the Christcurch attacks and those in Sri Lanka. At the same time, on the same tiny screen we have to deal with family, manage school or work and want to be there, on the spot, when our dear ones text us. What’s remarkabe is the relentless rhythm of real-time updates and the intimacy of carrying around such a small device, so close to our body and soul. Many of us fall asleep and wake up with the phone. Never have remote others, remote events been that close to us. The thesis of my book is that telephone and society have merged in a most intimate manner. During the past century media where still at a certain distance when we read the newspaper, listened to radio and watched a film or television. We entered the information environments and then switched them off again. With smart phones this seems nearly impossible and is much harder to reflect that just happened. This anxiety is also known as the fear of missing out. What started off with dialing on the radio and surfing TV channels is now so much more intense. Try to recollect the messages that just scrolled by on Facebook, Twitter or Instagram. It is impossible to memorize them. Most of this doesn’t even reach our unconsciousness. Or does it?

SP: How did we shift from the supposedly rebellous and activist use of new media in the nineties to the passive and consumerist attitude of today?

GL: We click, like, follow and swipe and are interactive as never before. However, this is all within simple and confined online spaces. We have no clue anymore how these machines work and lost the skills how to program them. Computer literacy has deteriorated dramatically, in the same way as we can no longer repair our car. This is the dark side of our demand for ‘usability’. In education, the democratization of new media has not empowered students. Instead of more self-determination through programming skills we ended up with this dreadful ‘distraction’ issues and teachers and parents having to police the presence of smart phones. The way out, however, is simple: we have to refine media again as social space, make radio together (known today as podcasts), turn the influencer tragedy into making television together. The tools of production have never been this cheap. What lacks us now is the social imagination. Forget those tweets, comments and likes; come together!

SP: What is the role of platforms on the internet?

GL: Platforms are a recent development. We adopted to the current situation so easily because the entire design of these platforms are so smooth, we hardly notice that we use them. Platforms are not like blogs or ordinary websites of the past. They work on a meta level: they bring together different players, supply and demand, and then calculate prices, make offers, inform about the nearest taxi, the cheapest room. The platform economy is real, as it also becomes visible agriculture, logistics and dating, of course. Both supply and demand are treated as competitors but there is only one platform. Everyone like to be in that role and be the intermediate as this is where money is made these days. We can only democratise (or regulate) plaforms if we dismantle the underlying principle of centralization. What we need are peer-to-peer alternatives that work in a decentralized way, with the same funcitionality as the current apps.

SP: In the chapter “From Registration to Extermination” you suggest there’s a similarity between the Holocaust planning of the Nazis and the today’s big date use.

GL: I know, it is a dark comparison, a German one. It is in Germany that the protest movement against the systematic violation of our privacy by both Silicon Valley and the state security apparatus is the fiercest. We can learn a lot from their legal battles against the surveillance machine. In this chapter I go back to Edwin Black’s 2001 book IBM and the Holocaust to recall the somewhat forgotten role that computers played in the selection and then extermination of the European Jewry. These days we are supposed to be proud of our identity, heritage and race, but in the 1970s, when I started to be come politically active, this was completely unacceptable. My mother was part of the protests against ethnic profiling in the census. Look at the data tech giants and governments have gathered about us, and match this with the role Facebook played in the Rohingya genocide in Myanmar. Or the use of Facebook Live in the Christchurch massacre. The point is, today’s technological violence is invisible and abstract. Most freightening is the role of profiles that we ourselves have actively created, and that are matched with other databases. This all runs in the background. We need to keep that in mind as the media only push very bloody pictures of terrorist attacks. The millions out there that die remain invisible and without a name, they disappear, somewhere in Africa or on the Mediterranian, without a trace.

SP: Is going offline a solution for our sadness? What do you think about this idea? How can we overcome our sadness?

GL: The need for a moment of silence is there. We’re exhausted and a need a break. This explains the popularity of yoga and mindfulness. Facebook and Google have already thought about this well before we did and already offer apps that switch off our phones. It not in their interest if the situation backfires (which is clearly happening right now). In my book I argue that we have anyway reached the stage of ‘peak data’. Entropy and indifference can potentially render their databases filled with valuable information about us useless.

SP: How do you imagine the evolution of internet, social media and platforms over the next years?

GL: Two trends occur in parallel, that eventually collide: on the one hand we’re got sucked further and further into this social media abyss (the title of my last book). It is not frightening there, quite the opposite, it is a cozy way of wasting our time. This is actually how we experience automation. The algorithms have captured us and keep us busy. We’ve entered a state that I call the techno-subconscious. On the other hand, as the billions gather there, it is precisely these platforms where major conflicts are being played out—up to the level of cyber warfare. Deep fake and identity theft are only the beginning. They question we, Europeans, need to ask: are we going to play any role in this? Where are our alternatives? They exist, we only have to start using them and unleash a cyber awakening: the ressurrection of the social. 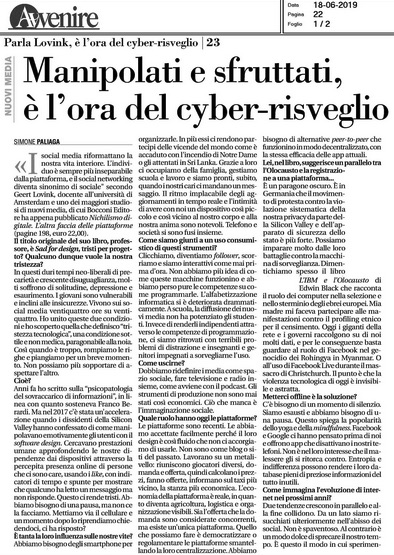 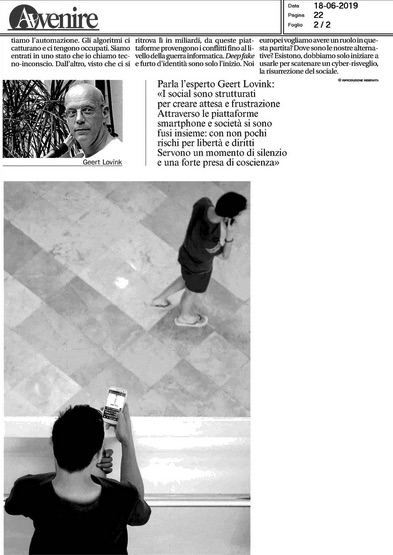