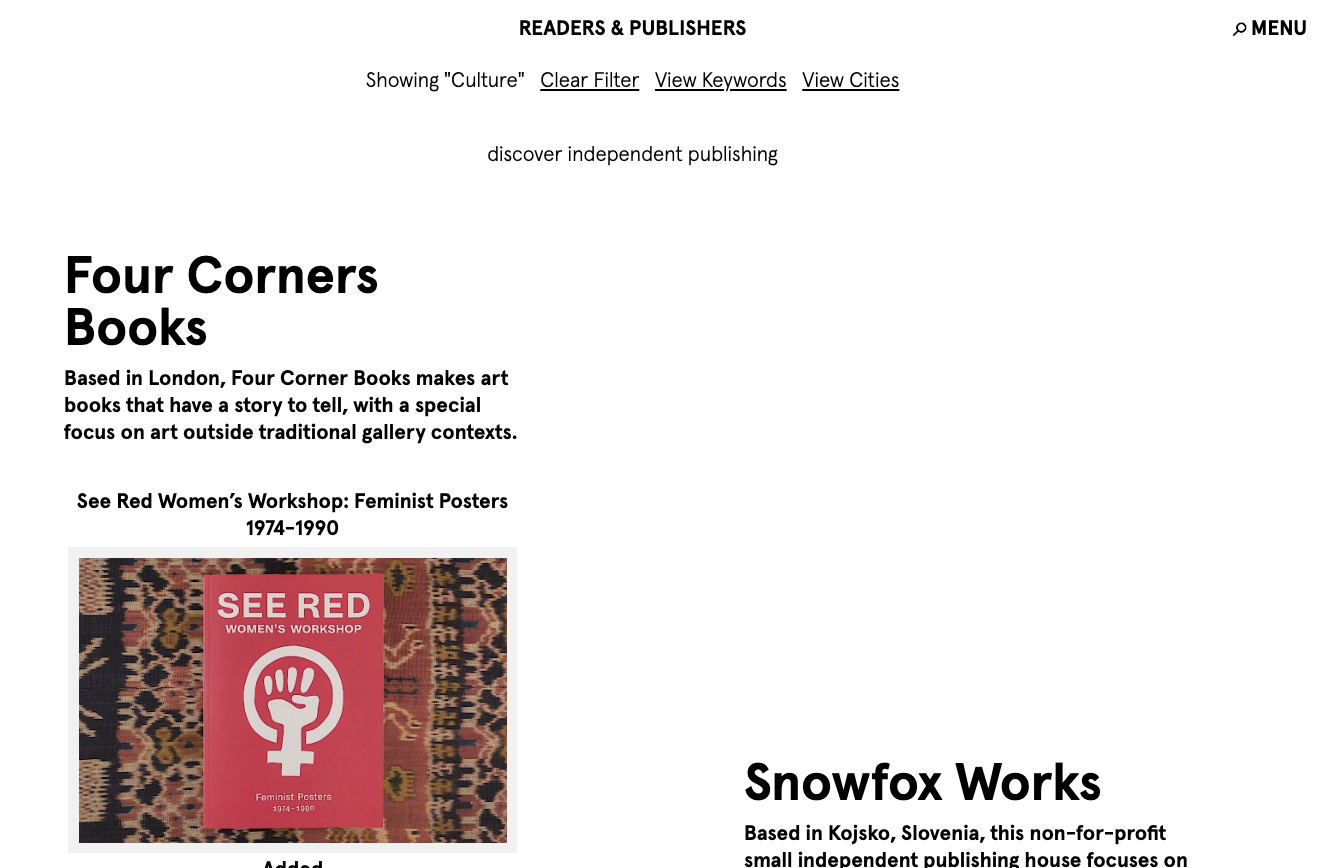 To bridge the gap between the arts and publishing the platform Readers & Publishers was launched earlier this year at the Printing Plant Book Fair in Amsterdam. Writers and readers writing from an artistic background are connected to publishers who publish on these topics. We spoke to Cristina Garriga, who initiated the project.

1.     Can you give a brief description of what Readers & Publishers is?

Readers & Publishers connects readers and independent publishers around the world with an online directory, projects and conversations.

Our major project is the Readers & Publishers website, which is structured as an online directory for readers/artists/writers to discover those independent publishers around the globe that work with the themes of their interest.

It is the latest project of My Bookcase, a creative studio that explores the role of the book and its reader in today’s society through workshops, exhibitions, publications and self-initiated digital and offline projects. I started My Bookcase in 2014 and since 2016, Julia Doz and Katie Reid joined me to bring My Bookcase to the cities of Glasgow, Barcelona & Amsterdam, where we are active today. We also joined forces to initiate Readers & Publishers.

Readers & Publishers was launched in November 2018 during Printing Plant Amsterdam Art Book Fair. For the launch event, we were lucky to collaborate with the organizer of Printing Plant, the non-for-profit exhibition space Looiersgraacht 60.

Readers & Publishers was born out of a felt need in today’s creative society. Working in the crossover of the visual arts and publishing, we saw the need to create a bridge between these disciplines. The need for artists/writers to understand how independent publishers work and the need for publishers to reach a wider and interested audience.

The result: a simple directory of independent publishers where you can search through keywords or cities. The response has been really good so far: today we have almost almost 100 publishers from 4 different continents, from Cape Town to Isle of Lewis and Chennai to Santa Barbara.

3.     What can readers find on this platform that they would not find using other platforms such as Goodreads or generally any search engine like Google?

Readers & Publishers aims to create a community of support for independent publishers and a resource for readers to find them. This is not the aim of bigger platforms such as Goodreads or Google searching engine, through which it will be difficult to find the work of some of the publishers we work with. Independent publishing is quite broad, from publishers working on 5 titles a year to publishers releasing 5 titles a month! Our interest is to place them next to each other in an equal way, showing their work together so their different network and audiences get together too. Therefore the aesthetics of the website is very clean and simple, aimed at creating a democratic place.

It is not our aim to replicate the role of a distributor or bookshop but to enable new connections to take place. Our understanding of the ‘reader’ is as a potential writer/artist, that will create something to feed back in the system of publishing and re-start it.

How is this ambition reflected in the website? By for example, asking publishers to state clearly their ‘Submission Policy’, seeking transparency and clarity. I think this is a unique characteristic of Readers & Publishers.

When registering a new publisher, we are asking them to be concise: 3-5 keywords representative of their work, 6 most representative books (they can update them with new releases afterwards), a short description and their Submission Policy. This structure allows us to achieve the transparency and clarity we are after.

4.     In the F.A.Q. section you note that independent publishers can only apply f they have print books, not just e-books. I was wondering about the reasoning behind this?

Readers & Publishers is in its first phase of development, and we had to take some decisions to be able to focus on one specific subject of publishing. One of these decisions was to only list books in English, publishers can work in many languages but only books in English (or no words) should be listed in the directory.

Publishing is broader than the production of physical books, but the idea of narrowing our work to them, enabled us to work within some limitations and maintain the initial focus of the project.

5.     What is your favorite part of R&P? Is there a specific keyword or aspect that represents what you have in mind for the platform the best?

I think independent publishers are really ahead of the game in exploring publishing as an artistic practice and beyond, but because (and maybe thanks to) their limited resources these efforts are less visible and acknowledged. We are helping them in the ‘reaching out’ and ‘promotion’ aspect that can help them towards attaining a sustainable economic model, and this is done through the creation of a win-win situation for artists/writers/readers and publishers.

A word that usually people uses to define us is: simplicity. This talks about the aesthetics of the website but also to the way it is structured and the agency behind it. The website was designed by the Amsterdam-based designer Joel Galvez.

Unsurprisingly, the ‘keywords’ on the directory that are currently most populated relate to visual arts and design (for instance, searching the keyword ‘Art’ brings up 20 independent publishers). However, we’re equally invested in the less expected keywords such as ‘Activism’, ‘Alternative Politics’, ‘Worker’s Rights’ and ‘Romanticism’ that currently bring up one result each. We’d love readers and publishers to continue recommending new independent publishers to join and see this site expand driven by its community of users.

We currently have an on-going Open Call for independent publishers to join. Joining is free and done through a simple online Form. This means we are currently the ones at the back-end of the directory, but we are working towards handing the key to publishers to access the website and take care of their own profiles and the creation of new ones.

We are also interested in bringing the engagements that Readers & Publishers enable to an offline setting, through events and projects. Following the ideas we developed on the occasion of the official launch of Readers & Publishers during Printing Plant Amsterdam Art Book Fair. For it we created the Open Book#1 where we invited publishers of R&P network listed under the keywords #art, #artistsbooks, #contemporaryart, #artpublishing to reply to some questions around: community, readership, the future of publishing and the relationship between visual arts and publishing.

In that sense, the book became a physical space for the encounter of multiple voices that share common values but are geographically disconnected and sometimes unaware of each other. It also became the catalyst of an event where we invited two publishers and a moderator to expand these topics through an offline encounter where to add their voices and the ones of the audience to the topics we were opening up. Enabling a constant writing and questioning, that’s why we called it the ‘Open Book’.

We are currently interested in expanding more this offline side of the project, creating a program of events that can foster these relationships even further. At this very moment, we are holding conversations with several Art Book Fairs to test some of these spaces of encounter.

Making Public teamed up with Lídia Pereira of Pervasive Labour Union zine after the Urgent Publishing conference to make a special issue that would move far beyond the known realms of ‘conference proceedings’. What happens if you shift focus from the official reports and try to include the ‘debris’ left after an event, in the [...]