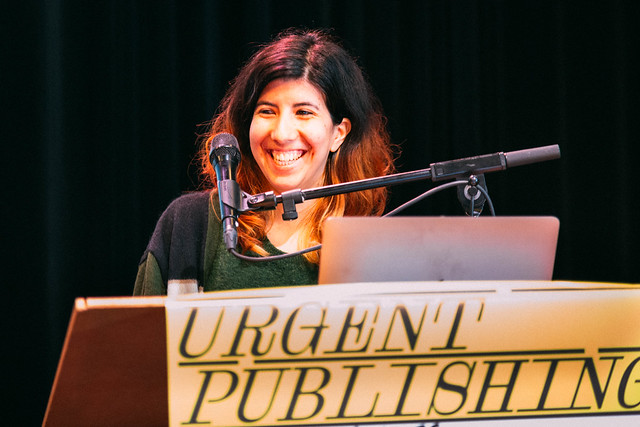 The invited speakers during the session The Carrier Bag Theory of Non Fiction presented projects which inspire thinking further about non-linear storytelling, publishing, collaborating, and how the modular behavior of such projects shape future practices, by challenging the current ones. One of the main questions is: How do these experiments affect the past stories, the myths, where heroes speak of truth? Indeed, today’s digital spheres call for different stories not only from writers, but designers, developers, authorities(etc), which all contribute to modern types of reading experiences.

One of the speakers, Lotte Lentes, decided that her research project 100 pins in Paris of walking through Paris and collecting various forms of information picked by bodily exhaustion and exuberance, deserves a website format, in order to stay true to her experience.

Liesbeth Eugelink’s interactive book called Bitterveld, challenges linear storytelling (start->end) by being an app, which tries to capture the moments of full presence in Berlin. It consists of different storylines which act as independent, textual fragments which can be read without one another.

Janneke Adema and Gary Hall, on the other hand, criticize what publishing does rather than what it is. According to them, culture which is remixed and made modular in digital environments creates new forms of communication. What’s important to remember is that not all analogue objects can be translated to digital forms. Doing so mirrors lack of appreciation for books, for example. It’s like putting trees, minerals, and shops in one-and that’s all. It’s a commodity. They argue that in order to re-invent performing a book, one needs to embrace everything what is given with the book, and focus on these questions:

Where should we cut them?
Who is making decisions?
Who moderates the decisions?
What’s kept/ what’s reserved in the process?

Then Axel, oh Axel Andersson, who was asked not to give an academic ted talk, did not mind sharing a B&W image of him, in which he is thinking about Smithson; a fact which opened up his presentation of thoughts on topics of locality and post-digital publishing. As his position of being a critic was challenged by extinction, he was faced with having to experiment his way forward and think what might be wrong with media that critique doesn’t work? A funded experiment, an online book fair where online users get to publish, amateurization of critique, and the last mass mail at the Supermarket art fair (2018) where a critical journal written by the visitors is printed on spot, are projects that call for further thinking about how to be iiiiiiiiin the context? The context in this case, can be further defined as not a place, but physicality which has locality…In other words: How to expand public/private spheres?

Lidia Pereira’s graduation project, touching upon the topic of labour on social platforms which later becomes a product designed by social experiences, questions why we are not organizing. According to her, it’s because we don’t consider it work. Her project is an attempt to create a medium where there is discourse, instead of a definite conclusion(s). Perhaps even a platform for changing minds? That’s how she came up with a zine, as a research medium for her research to continue growing.

After all the lovely, public thinking activities, of course the presenters were invited to engage in a discussion followed by questions and answers. Following questions tickled the imagination:

Why do old formats persist?
Who has the privilege to own the new platforms?
What is the future of archive?