Over the past two years, Bitcoin is actively debated in diverse narratives and journalistic outlets.

Beyond the usual description of Bitcoin most seem to agree on – that is, a crypto-currency, with which users can transact (pseudo) anonymously in a decentralized, P2P network at zero or low fees – perspectives on Bitcoin’s functionality and feasibility are conflicting.

Arguments both in favor and against the currency tend to be repeated across the board. What’s more, mining through articles published in The Guardian, Reuters, Forbes, Wired, BBC, Ars Technica, Al Jazeera and the likes, I’ve noticed that some central arguments are used bidirectional.

7 Common arguments in favor of Bitcoin:

1. Bitcoin’s network of production and transaction is independent of bank and state intervention

“The emergence of Bitcoin confirms that money need not be created by government “, John Gray of BBC  notes. He also points out how it is somewhat symptomatic that countries in financial and political crisis have been eager to adopt it at a faster pace than others, like in the famous example of Cyprus.

Bitcoin’s essential elements, both technologically and conceptually speaking, are its network structures that lay outside the mainstream framework of bank services and state regulation. This is applicable for production (anyone can join the mining of the currency – this shifts the existing government production of money to the crowd itself) as well as for transaction (which is peer-to-peer, regardless of physical boundaries, financial access or political restrictions).

2. Bitcoin is highly secure thanks to complicated cryptographic algorithms

Salmon Felix of Reuters  admits that “Bitcoins were designed to be – and, in many ways, are – the perfect digital currency: they’re frictionless, anonymous, and cryptographically astonishingly secure.” He is also cautious about the limits of this.

This argument likely draws on the opinion of Bitcoin’s alleged inventor (Satoshi Nakamoto): with the weakened trust societies now have in banks, trusting algorithms instead could be an alternative. Bitcoin websites initially boasted this argument and media discourse followed up on it. Nevertheless, the latter is now less focused on this argument, given recent hacks.

Bitcoin was believed to be fully anonymous. However, writers such as Kadhim Shubber of Wired UK warned it is not.

This only makes anonymity even more desirable: “a truly anonymous online currency is needed to make democracy safe” argued Richard Stallman of Free Software Foundation in an interview on RT. With further coding, this could be technically achieved, he continues.

Why is anonymity such a powerful argument in favor of Bitcoin? The idea of freedom of transaction and data privacy is strongly related to anonymity. Unlike the huge amount of personal data required in any money transfer via banks or payment services, little is required and visible in Bitcoin transactions (just the numeric ID and the amount transferred).

A low-cost transaction system is appealing to many, and media discourse focuses on this aspect consistently.

A less discussed part of the argument is the role Bitcoin can play as a direct solution to the issue of remitted money (Joshua Brustin of Bloomberg).

Remittances form the second largest flow of money that circulates in developing countries; transfer fees charged by banks and payment systems take away a valuable amount. Timothy Lee, Washington Post writes that “nobody has built a turnkey Western Union alternative, but the emergence of Bitcoin ATMs is a first step toward low-cost international money transfers”. 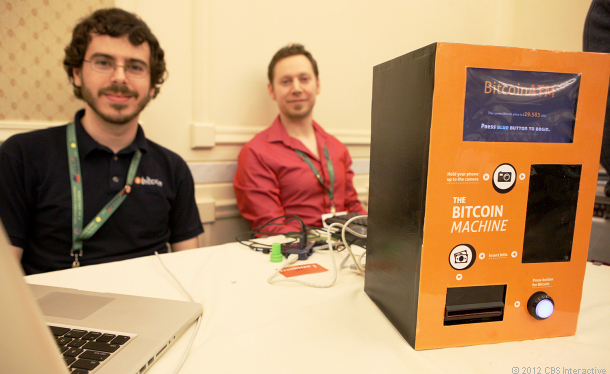 Zach Harvey and Matt Whitlock, creators of the ATM that accepts dollar bills and instantly converts them to the alternative Bitcoin currency. (Credit: Declan McCullagh/CNET).

Over the last year, the number of newly-designed Bitcoin ATMs has grown, including this Dutch case.

5. Bitcoin is a self-stabilizing currency

The argument here lies in Bitcoin’s self-regulating mining algorithms. Since the algorithm of the Bitcoin software is set to release only a number of Bitcoins every 10 minutes (50 for the first four years of existence, and then reducing to half every other 4 years), this means that, unlike the state, it can only issue a limited amount in total: 21 million in 20 years, with no inflation (Liam Halligan of Telegraph UK).

6. Bitcoin is a global currency

“With Bitcoins, transfers can take place across continents and time zones with no problems, no time lags, and only minuscule transaction fees,” Salmon Felix of Reuters argues.

While Bitcoins seems to have been built to become what Salmon calls the lingua franca of the Internet, it is this very argument that, if proven true in the years to come, can also be the currency’s weakest points.

7. Bitcoin does not create debt

Perhaps the critique to which Bitcoin responds directly is the heavy debt that exists in current power structures of finance. “Bitcoin creates money without creating debt, it stores money for free, it’s faster, cheaper and available for everyone” says Nicolas Mendoza of Al Jazeera. This is probably the least studied side of Bitcoin and simultaneously a very relevant one for the currency’s wider adoption.

All in all, arguments used in favor of Bitcoin rely heavily on the crypto-currency’s nature and characteristics. It is the latter’s often conflicting purposes and implications that can make most of the arguments reveal their cons side.

Money derives its legitimacy from the state. What is the case with Bitcoin’s legitimacy, given its independent and disruptive networks?

Is faith in algorithms’ security and neutrality justified? Then what is there to do about the hacking threats?

What role is Bitcoin currently playing – commodity or medium of exchange? Price instability and the currency’s deflationary nature pose a big question mark next to its so called self-stabilizing nature.

Is Bitcoin for everyone? Is it relevant if people understand how it works? How difficult is Bitcoin to understand, outside of a tech savvy community currently surrounding it?

I have rounded up several cons that are widely adopted by media narratives – follow the next post!