Follow-up to the previous post on “7 Common arguments in favor of Bitcoins” in diverse media discourses, this post is dedicated to the other side of the (bit)coin: 7 most common arguments against it.

1. Bitcoins are not serious money as they have no legal tender

Bitcoin’s disruptive and independent model does raise valid questions in regards to its legitimacy, user protection and trade ethics.

Edward Hadas of Reuters notes: “money that is not issued by governments is always doomed to failure. Money is inevitably a tool of the state.”

I think the question of legitimacy is of primary importance in the Bitcoin debate, and is not thoroughly analyzed. It’s the essential debate of currency versus money in contemporary times. Money IS the creation of the state. Bitcoin is currency, not money. Currencies have circulated long before the emergence of the state and continued to do so as complementary currency while state minted-money became official, but always in informal networks of trade. This is also the case in Bitcoin. Is then its current adoption enough to give it legitimacy for a wider audience? Would state regulation encourage a wider adoption of Bitcoin or would it destroy its very conceptual meaning and purpose as an independent currency?

Meanwhile, Bitcoin is in a legal gray area. This leaves plenty of space for speculation, with its value in real money fluctuating abruptly. It also leaves space for restrictions, such as the recent removal of several Bitcoin apps from Apple’s App Store, on the premise of  financial transaction facilitation.

2. Bitcoin is subject to hacking threats

Writers such as John Gray of the BBC warn that  “a virtual currency can’t escape the dangers of actual societies”, while authors such as Tim Worstall from Forbes went as far as blaming security issues for the currency’s extinction.

In other words, cryptography is a human artifact and thus, not without its faults. 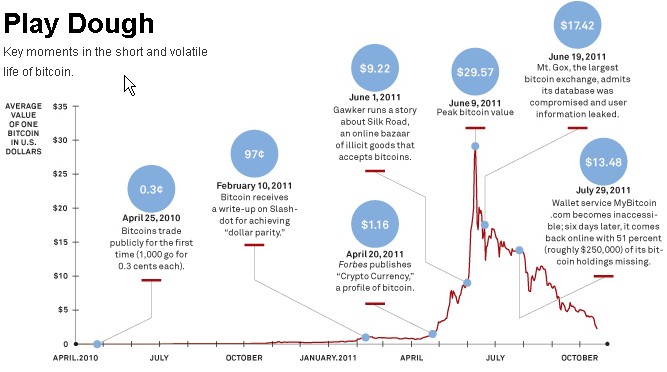 History of Bitcoin’s development, including security breaches in 2011 – wired.com

There are some ventures offering BitBills or BitCards as new ways of stacking the currency if one does not rely on the network. Arguably, the software’s lack of trust from the people backfires.

I would argue that algorithms cannot guarantee in practice as much as is promised in theory. This is partly a result of Bitcoin’s open source code, available to anyone, including hackers who can figure ways to get hold of accounts and transactions. This becomes further relevant as no entity ensures against hacks. Freedom of transaction comes with responsibility, yet how can users put up with it when understanding Bitcoin requires significant technological know-how?

3. Its price instability makes it behave as a commodity rather than medium of exchange.

The value of Bitcoins was a few dollars last year, now it has soared to over $1,000. “Such volatility makes it useless as means to do transactions” warns the founder of Forbes, while Timothy Lee, Washington Post  concludes that “whatever virtues Bitcoin has, stability of value is clearly not one of them.

Instead of acting as a medium of exchange, Bitcoins can be regarded as investment opportunities. This might be the case, as points out a study published on Ars Technica a year ago: 78% of all Bitcoins are kept under their  owners’ digital mattresses.

I would argue that this is also partially a result of the deflationary nature of Bitcoin; while it is intelligently designed to avoid the current inflation issues that real money is facing, the downside is that Bitcoins can become very valuable if speculation is growing.

Decentralization and anonymity come with freedom of transaction but also with the price of hidden markets such as the recently closed Silk Road or the emerging Assassination Market. Stephen Mihm from Bloomberg questioned whether Bitcoins value itself relies on its use on dark markets.

5. Bitcoin exposes the identity of users

Andy Greenber of Forbes questioned the process via which one can buy and sell Bitcoins, pointing out that exchange platforms now require users to provide valid ID. This is a first change of policy as a result of legal pressures for compliance with financial regulations. Under these circumstances, users rely on face to face meeting for exchanging the first purely virtual currency.

Contrary to some opinions on the currency’s anonymity, recent examples argue that tracing down one’s identity is possible.

Yanis Varoufakis makes a claim that “there can be no de-politicised currency capable of ‘powering’ an advanced, industrial society”. Steve Faktor of Forbes enumerates technical complexity, marginal legality, deflationary nature and lack of interest in the general audience as main problems.

I would argue that the success of Bitcoin as a global currency depends on the status it aims to achieve. As a complementary currency, it could work, because it will not take up the big task that money has now – a translator for all financial transactions, a relationship with the state. However, with its limit of 21 million, it’s hard to see Bitcoin as ‘the new money’ – that would imply a change in status and either a compliance with the state or negation of the latter.

7. Bitcoin is not for everyone.

Bitcoin is often presented as pertaining to a geek world of savvy programmers and tech entrepreneurs. While payment itself can be relatively easy, understanding how it works requires tech knowledge. How does it then differ from usual internet banking ? With a friendly interface anyone can transact but the financial mechanisms remain known only in selected circles – are thus programmers the new economists?

Further egalitarian issues surface, as Benjamin Wallace of Wired points out: there is a segmentation between the users: aristocracy (early adopters of Bitcoins, who own more because they were mining from the beginning) and poor (newcomers, who buy a Bitcoin at many times the value it initially had). Recent statistics on Bitcoin distribution among different users is worrisome: 927 people own half of all Bitcoins. 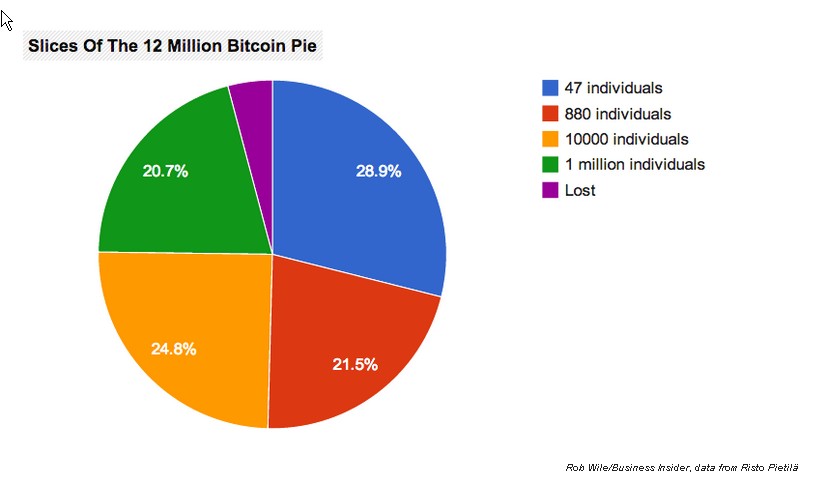 In conclusion, some of these commonly used arguments, either in favor or against, are often double-edged. They contribute to the media narratives that outline Bitcoin’s contradictory nature – almost all of its characteristics invite for different, often conflicting implications.

Narratives do change as events unfold; I look forward to see very different discourses in the coming months and perhaps more reflections on what has been unraveled so far.