It seems like the “pay it forward” idea just got monetized by the new currency development entitled Social Coin. It goes even further than that – the coin is encoded, which makes it easy to track and visualize how far it has travelled in the process of good-doing.

Social Coin is the initiative of a Barcelona-based non profit. It is essentially a physical coin; the owner gives it to a person they have helped (whether friend or stranger). Alongside with the coin, they need to explain how it works and request that the new owner makes an act of kindness to someone else and thus passes on the ‘social coin’.

So how does it work?
A ‘social coin’ is made of biodegradable and compostable polymer. It holds a different QR code on each side (printed on a small piece of paper). When scanned, one takes the owner to the Social Coin website and the other provides the unique code that can be logged in the online system. Once there, the owner writes down when and how they plan to give the coin forward. The rule is always to award the coin to someone they helped (‘help’ is broadly defined- it can mean a simple gesture or investing considerable time and knowledge). When the next owner receives the coin, scans the QR codes and logs in with the unique code in the online system, the ‘social coin’ is tracked on a digital map to see how far away from the initial place it has traveled and what the measured impact is. After 10 pay-it-forwards, the coin should be buried in the ground as it contains a small rose seed.

Here are some interesting statistics available so far: 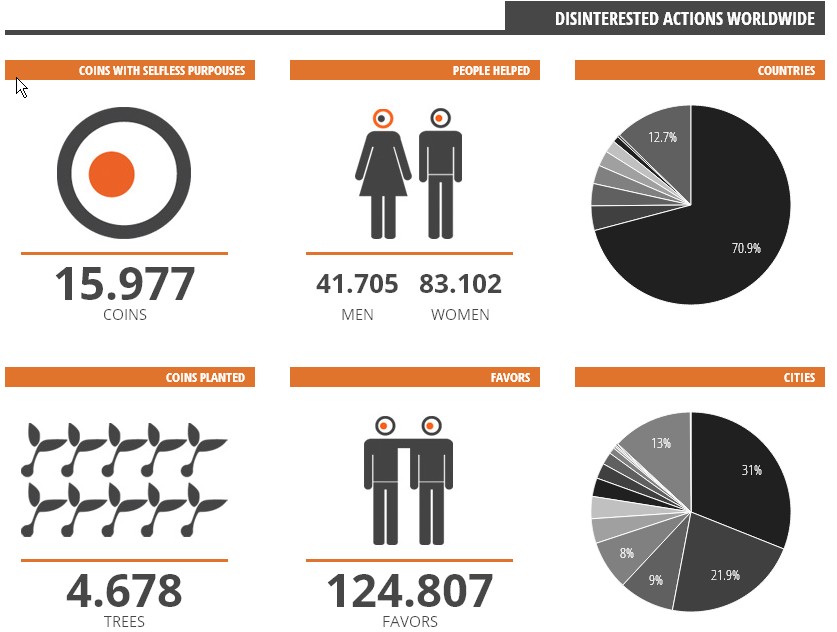 The coins have been largely used in Spain’s biggest cities, with Amsterdam, Paris and London following. It also seems that a there are twice as many female participants in the process.
Source: www.thesocialcoin.org

There are a few ways to earn a ‘social coin’. Those interested can offer a small donation to the non profit behind the idea and get two coins made: one for them and the other for a charity. They could also choose to volunteer for charities that have been donated social coins and receive one from them. The third opportunity would be to offered one from an owner, which is more by chance than by choice. On the other hand, companies could purchase any number of coins and either use them internally for employers or donate them directly to charities and schools as part of their corporate social responsibility program.

What’s interesting about The Social Coin is that its founders crowdfunded for the idea in early 2013 on Goteo – a Spanish crowdfunding and crowdsourcing platform. They reached an amount of 10,000 E. but also called for and identified companies and travelers to do beta-testing. Judging by their statistics, the movement has taken scale. The Social Coin also presented their success at the European Commission conference on crowdfunding, in June 2013 (see video below). 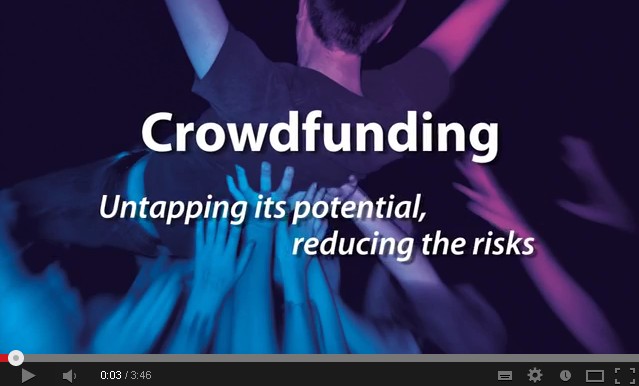 The website of Social Coin offers further useful information, albeit it’s clearly in its initial phases of design and content. There is some flawed English here and then ( which makes texts hard to follow at times), and a few inconsistencies (for example, Social Coin is sometimes defined as a for profit, other times as non-profit).

I personally like the idea of tracking the acts of helping others (and geo-mapping and visualizing how these coins travel would surely be interesting to observe), as well as measuring impact (which is not fully explained at the moment). However, while browsing the website, I kept wondering what purpose do ‘social coins’ really help serve and what are the long-term perspectives here?

In the “Why?” section of the website, individuals are encouraged to engage with the ‘social coin’ as a means to be altruistic and eco-friendly. Altruism though is a debatable concept. What helping others creates is a form of moral indebtedness. This moral indebtedness is acknowledged, made real with the reward of a ‘social coin’; it does not suffice to say a passive “thank you” but rather activate one’s behaviour to give back (or in this case, pay it forward). The purpose which ‘social coins’ then serve is to amplify one’s common sense of helping others by incentivizing direct response.

I rather see a concrete purpose when it comes to corporate involvement. In the same “Why?” section of the websites, companies are encouraged to mint coins (essentially, demand and purchase them) and then either give them to employees or to NGOs/schools. As ‘social coins’ are tracked and supposedly measure the social good impact they have, they make a fit tool for companies to integrate in their social responsibility program.

However, since I don’t have a ‘social coin’ yet, I cannot have access to the online system and see how tracking, metrics and measuring impact actually works. What would be very interesting to see is a visual map with how the coins travel, as well as an explanation of how impact is measured (which metrics are used?). These would be relevant insights in order to see what the long term perspectives of ‘social coins’ are, what novelties it can bring in a world where aspects such as social capital or behavior have long been measured by (largely) proprietary platforms.