Brian Holmes has long been a key voice in the critical and activist oriented discussions on economics and is especially active on the Nettime mailing lists. Recently, he has been looking at issues surrounding global supply chains and their effects on society.

Holmes began his speech by stating that the time of ‘supermoney’ is now, explaining how power, control, and wealth can be acquired and used by the push of a button, with money being created, in many instances, out of thin air.

He focused on two elements that contribute to this state of affairs. The first is ultra low interest rates, often below the level of inflation, that allow people to “rent money” effortlessly, thus creating debt. The second, and more striking, is outright monetary creation. This money creation is often a tool used by the U.S., European Union, Japan, and other industrialized economies. The phenomenon, explained Holmes, was evident in the 2008 – 2011 financial crisis, where these states used all their money to bail out banks. Yet where did the bailout money come from and what were the consequences of pouring it all in the “sinking ships of global finance”? 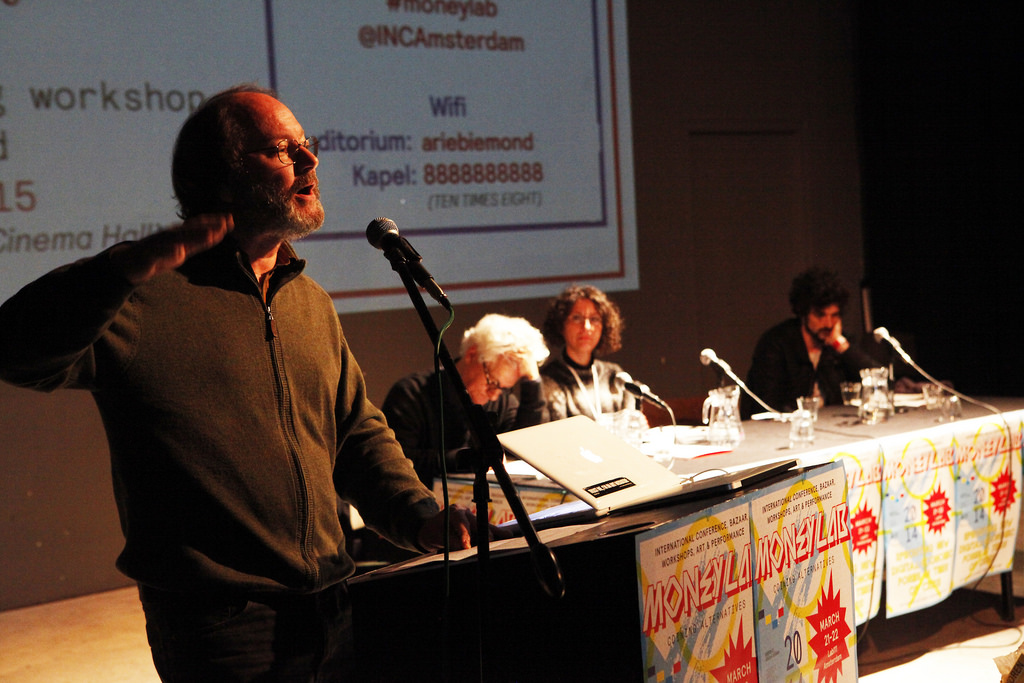 Holmes traced the first question back to 1968, when the U.S. banks could only issue as much printed money as they could back by real gold reserves. Around that time, however, the Federal Reserve of the United States decoupled the value of the dollar from the gold reserve. After this, the dollar’s new value was claimed to be derived from “productivity”. The Federal Reserve could now print money in whatever quantities it wished and called it fiat currency.

Much of this invented and spontaneous wealth went to “guns and butter”, namely the welfare state and the Vietnam War during President Johnson’s mandate. The amount of printed dollars available in 1968 was 44 billion, whereas in 2007 it was 930 billion (a 20-fold increase). Fiat currency, mused Holmes, essentially means “let there be money”.

Holmes continued discussing the notion of “creditism” that is supported by fiat currency. We all owe banks the money that they never had, he argued, which makes bankers appear as mystical creatures, offering us what they themselves do not posses. He explained how the money that people place in banks is not deposited there – fractional reserve banking essentially means only a small fraction stays in the bank, the rest is circulated to other accounts. Laws made it easier to do this. While in 1945, banks were regulated so as to keep 20% of any deposit as a reserve, today they are required to keep a mere 3% and, often, nothing at all. Money keeps being leant over and over again, with total created credit growing 50 times since then 1945 (from 1 to 50 trillion dollars). While this was supposed to help economies grow, it did the opposite. With many corporations and medium sized businesses getting themselves financed all the time, no credit is enough. What these companies do today, explained Holmes, is finance themselves ahead of production, endlessly expanding operations and then quickly creating corporate bonds to trade and get even more money. With money becoming electronic, it becomes harder to keep track of who and what gets financed.

Turning to the second question – what are the results of having bailout the banks and the corporations they support – Holmes draws attention to how unemployment grew and salaries were stagnant throughout this period, which meant more money could be poured in for-profit purposes. Another result is that “billions of dollars have been bought at ultra low interests rate in the West and in Japan and ploughed into government bonds in the developing South (Mexico, Brazil etc)”, together with big investments that further create social and economical inequalities and conflicts in those areas.

Holmes ended the speech with an important remark. He stated that money comes in three forms: unlimited money (the one endlessly printed by banks, the speculative one – stocks, bonds and other trading packages), the Fordist-type of money (the one people relate to – monthly salaries, benefits, taxes that go into schooling, arts or public infrastructure) and finally flexible money (in the form of flexible wages that cause debts that one is mandated to pay back). It is these debts and the precarious working contracts that heavily burden people and their economical power. While alternative currencies are addressing this issue already by allowing people to create their own wealth and mobility (from Bitcoin to crowdfunding), Holmes suggests that a direct action against austerity measures is needed in order to fix the mainstream finance as well.