Dmitry Kleiner and Baruch Gottlieb from the Telekommunisten art group based in Berlin joined us Friday afternoon  for the Tactics for Economic Dissent session. Through critiques of communication systems, the group’s art practices develops alternative platforms and programs to subvert centralized and hierarchical structures of society.

One of the first slides from the presentation displayed lengthy words that require a second glance: technological disobedience, transvestment, and counterantidisintermediation were the colorful words that loomed over the rest of the presentation. This dense presentation discusses venture communism, an organizational form for workers struggle that exists to expand political economy within the dominating capitalist society.

Kleiner begins the talk by defining the key term “counterantidisintermediation.” The early utopian vision of the internet was destroyed by the centralization of computer processes, which resulted in powerful money and energy hunger entities. Counterantidisintermediation technologies are a necessity to maintain venture communism’s stance against capitalism and function by relocating computer systems to the endnotes rather than the centralized intermediary systems.

Gottlieb discusses technological disobedience as the disruption of the regular streamlined capital of the technology market by hacking, modding, or recycling devices and software. Reclaiming the potential of used materials is a necessary objective for venture communism because it fights the violent roots of technology and subverts the product lifecycle. He informs the audience that counterantidisintermediation and technological disobedience are the key intellectual strategies to sustain venture communism practices. 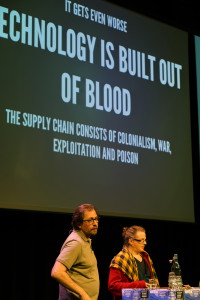 Kleiner expresses the economic infrastructure for venture communism by defining the macroeconomic concept of transvestment. Insurgent finance and transvestment are the active forces searching for ways to divert values between the classes by imposing a balancing act between investment and exvestment. He then acknowledges the question of how a venture commune initially acquires property, and details a commons bonds process as a solution.

A venture communist is cooperative and owned equally by all, federated through the ownership of many co-op members, commons based, and open to all workers. Kleiner then mentions that these guidelines are suggested as ways in which to avoid the development of hierarchical structures between various co-ops and the possibility of turning into a unequal organization after gaining too much power or activity.

Tactics of technological disobedience will allow for greater appropriations of value from the end of the production chain, and counterantidisintermediationist practices will disrupt the monopoly of web platforms, thus protecting venture communism as falling into the capitalist trap. Many other topics and historical references are mentioned in the talk, such as the CompuServe age of centralized platforms, cargo cults and their false image, the bloody background of technology, and a Leninist trajectory of politics. Gottlieb finishes the presentation on a very hopeful note, suggesting that by confronting the existing social institutions, the protection of the social conditions of health, housing, food and water supply, education, childcare, may be achieved. Supporting the struggles to win these needs will help workers get what they need to produce, in order to allow for a revolutionary workers movement.