Care, a concept that gained mainstream prominence during the pandemic, was the focus of the fourth stream of the MoneyLab8, moderated by Davor Mišković of Drugo More and including Tomislav Medak (part of the pirate.care network and community center MaMa in Zagreb), Cassie Thornton (artist and author of the upcoming book The Hologram, Pluto Press) and Maddalena Fragnito (co-founder of Macao). The speakers presented a vast array of initiatives that show the ambiguities of care, being both an opportunity for the nurturing of interdependence and a site of extraction and exploitation, which is what Maddalena labelled “capitalist care”.

Davor opened up the stream by mentioning the ten principles of healthcare by Andrija Štampar and in particular three of them: the idea that informing the people is more important than any law, that in healthcare there should be no distinction between the economically strong and the weak, and that the doctor must also be a teacher.

Cassie Thornton, a US artist based in Toronto, somehow challenged this last principle by suggesting that the patients and their communities should partly become the expert of their healthcare. She presented the Hologram, a model for peer support and mutual aid meant to generate the opportunities for interdependence that don’t usually happen within capitalism or are even ostracized within this system. The Hologram emerged in a period in which Cassie and her peers were experiencing economic and housing precarity as well as a limited access to medical care. As Cassie puts it, it was an “intentional community in exile” that formulated a clear question:

How do you organize your own care, before or during an emergency, within a set of completely unstable conditions?

The Hologram is an integrative care model which attempts to break hierarchies such as gender or citizenship status. The approach is holistic, but not just in a medical sense: it is attentive to issues like intergenerational trauma, accumulated debt and class. This is where the name “hologram” comes from: the health of what is traditionally known as patient is considered multidimensional.

The main goal of the model is to distribute the labor of attention and care. The person who gets care, called the expert, shares what makes them healthy to three friends or acquaintances who focus on different aspects: mental/emotional, social, physical. This distribution comes from the will to level the asymmetry between the people who are cared for and the ones that give care. As Cassie puts it, “We don’t want to get care from people who are not taken care of”.

The Hologram also distributes expertise, giving an active role to the person who receives care. Here might lie a critical issue of the model, as it could potentially contribute to the already in progress undermining of medical authority. How can then the Hologram take advantage of scientific knowledge while questioning impersonal medical authority? I wonder if Cassie influenced by Ivan Illich and I’m curious to see if there’s any trace of his critique of the medical system in The Hologram. 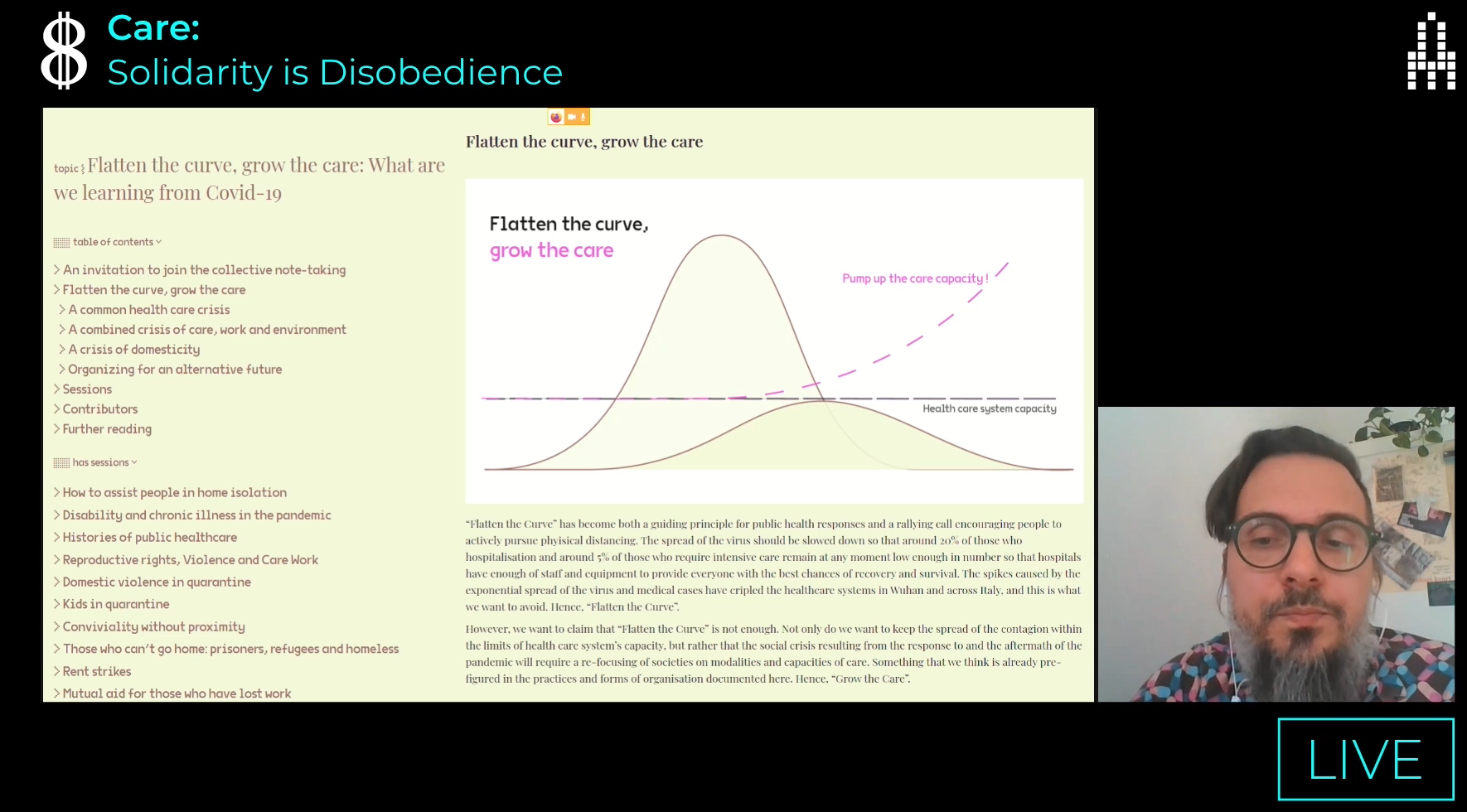 Tomislav Medak, currently a doctoral researcher at the Coventry University’s Centre for Postdigital Cultures, presented the pirate.care initiative. Pirate care is care that connects people on the ground of mutual aid and acts as a response to the neoliberal criminalization of solidarity. The horizon of pirate.care involves different levels of intervention, such as helping migrants at sea, supporting pregnancy termination, and liberate knowledge. Obviously these are complex territories where, as Tomislav stressed, care is not intrinsically nice but functions as a skilled form of labor that currently doesn’t imply reciprocity.

Pirate.care took inspiration from the online #syllabi movement, where groups of people would form the activist praxis of putting together lists of resources on topics such as games and feminism. The pirate.care initiative is also concerned with the maintenance of technical infrastructure that allows to collect and preserve useful documents. The idea is to prevent the common destiny of a WordPress database breaking and data becoming thus inaccessible. In order to do this work, the pirate.care initiative actively mobilizes institutional resources.

Tomislav gave an introduction of the work they are doing as a response to the covid-19 crisis, which can be summarized with the slogan “flatten the curve, grow the care”, as care was mostly offloaded on the front-line workers (for the majority women and people of color) who didn’t have other choice than go to work.

Tomislav pointed out that “back to normal would be disastrous” as the normal is based on an industrial agricultural system that creates at once food scarcity and food waste. In order to approach this one would have to get away with the seemingly flexible, just in time, hyperautomated chain of production of farming. The way to go is relocalization, better wages for the workers and the strengthening of internationalism. The system of provision should not only be protected, but also reclaimed within anti-oppression frameworks through myriads of rootless struggles (that are already taking place). 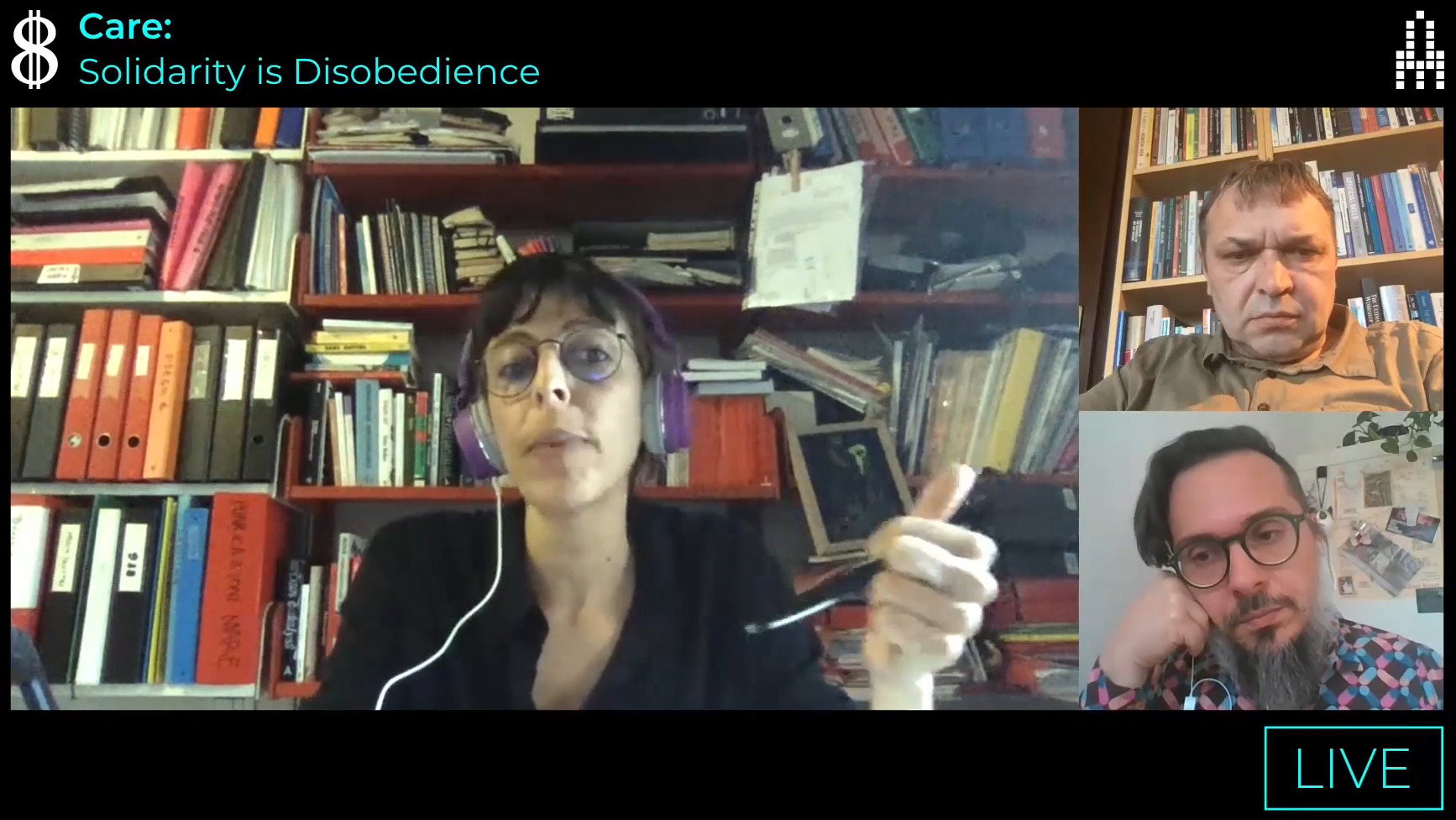 Maddalena Fragnito, cultural activist and co-founder of MACAO, presented SopraSotto, a self-organized nursery which intervenes when and where institutional support is lacking. SopraSotto is based on a series of principles including, but not limited to, the emphaisis on community rather than the nuclear family, a sensibility towards the dynamics of social reproduction, a feminist understanding of care.

The parents at SopraSotto also question stereotypes regarding children and education: they don’t see kids as “little monsters” that need to be domesticated as quickly as possible to become productive beings. In this sense, SopraSotto acts as a pedagogical battleground to fight “capitalocentrism”.

Soprasotto, which includes a space, two teachers, around twenty parents and ten kids, responds to the fact that childhood care is still institutionally tailored on the lifestyle of a segment of the population which is not a majority anymore, especially in urban centers like Milan where economic precarity is common and the work and life time are not allocated once and for all. For Maddalena SopraSotto is a “space designed specifically for children and especially for adults”.

In a shocking set of statistics, Maddalena shows the preconditions leading to the necessity of such self-organized structure:

From this perspective, the digital acceleration experiment propelled by the pandemic ­– as Maddalena explained – will only radicalize inequality and raise early school leaving: it is simply unconstitutional. What is at stake here is the very full-time school model, which was a relatively recent conquest. This is the risk that, quoting Naomi Klein, the “screen new deal” is bringing to the fore.

During the Q&A, various important issues were raised. Tomislav made clear that the intensive digitization in higher education is characterized by a platformization that goes and in hand with managerialism. You can’t automate without bureaucratizing and such bureaucratization brings power to the managerial class.

Maddalena expressed her skepticism to the mainstream centrality that care acquired, which happened, according to her, in the worst possible way: an implementation of top-down care as well as the re-opening of the productive systems without any structural reflection. This is why she suggested to reboot care on feminist grounds: foregrounding the labor involved, rejecting the delegation of care to a sacrificial class of service worker, and gaining agency in deciding what is essential work.

Furthermore, Maddalena listed a series of protests that show the possibility of internationalism facilitated by open technology, such as the Rent Strike, which started in North America, and later gained favor in European countries like Italy.