The relationship of Big Tech platform incumbents to blockchain infrastructures is complicated. For every experiment like the ‘soft hexagon’ profile pic on Twitter, there’s an outright ban of NFTs and crypto-gaming on platforms such as Steam. Despite the ambitions of crypto-evangelists to reach mass adoption, large segments of users are resistant to anything blockchain-related, often to the point of open hostility. Despite this tension, crypto-subcultures continue to evolve into labyrinthine, highly inventive and often baffling formations. Keeping up with these developments, let alone making sense of them, is a full time job. Hype and misdirection is part of the hustle, while reliable empirical studies and critical research are often in short supply.

Last month, I took a first foray into blockchain research through a short project for the DMI Winter School at University of Amsterdam. Having worked on app studies for some time, I was curious about so-called decentralized apps or ‘dapps’ – that is, software applications that utilize a blockchain. The goal was to empirically explore some of the different emerging relations between apps and dapps, between the apparent incumbents and challengers. Rather than accepting at face value web3 discourses of centralized vs. decentralized, the idea was to investigate the entanglements, dispositions and tendencies that are shaping these distinct, yet overlapping domains.

The term dapp can be read in part as a strategic framing to guide blockchain development by riffing on the known and highly successful commercial format of apps. Some even now re-categorise Bitcoin as the first dapp. The term, however, also supports a diversification of blockchain-based services and the application of user-experience design (UX) techniques to ‘onboard’ new users and build growth. In this sense, it represents the rise of new processes of platformisation and related forms of control. Some dapps, for instance, work only by processing transactions on a decentralized blockchain like Etherium, while other user interactions like content creation or gameplay are logged elsewhere on a centralized database. This helps reduce cost, but also affords the developer particular kinds of oversight. Due to the need to access nodes on the blockchain to process transactions, third-parties have emerged to handle these data-flows, essentially concentrating infrastructural power behind the scenes, as noted in a widely circulated blogpost by Signal developer Moxie. All this troubles the ideology of web3 as pure disintermediation.

Meanwhile, discovering and accessing dapps through mobile app stores is not straightforward. This is partly because Google and Apple maintain strict policies for how Android and iOS apps can interact with blockchains in order to mitigate against fraud and protect their established payment provisions/services (although there is speculation this could change after the anti-competitive case of Epic Games against Apple). Many users, in fact, access dapps as websites with a crypto-wallet browser plugin. Portals like DappRadar or Dapp.com provide catalogs of dapps via hyperlinks, mimicking app stores with classic grids of bite-sized icons, familiar categories and algorithmic sorting. Interestingly, however, these sites function more like financial dashboards by aggregating transaction-based data sources and metrics from public blockchains. Supporting this web-based approach, the web browser Opera (which already has an internal crypto-wallet) has recently announced it will integrate support for the Polygon blockchain to deliver over 2,000 dapps directly to users. The Brave browser also offers a similar kind of ‘native’ crypto-wallet. Another avenue to access dapps is through browsers built into popular crypto-wallet services such as MetaMask and Trust Wallet, which – to complicate matters further – themselves can be accessed as mobile apps on GooglePlay and Apple’s App Store, but sometimes with limited functionality (for instance, in June last year, Trust Wallet was forced to delete their dapp browser from their iOS version to comply with Apple’s policies). Consequently, with these various access points hedging for dominance, there is quite some competition to control the means of distribution to dapps across different infrastructures and platforms, both old and new.

Approaching this complicated domain in our short digital methods project, we decided to scope out some similarities or differences between these different access points. Using the simple query ‘NFT’, we contrasted the top 50 results from GooglePlay and the App Store with the kinds of dapps tracked by DappRadar. Methodologically, we used a mixture of app store scraper tools developed by DMI and performed a manual, bottom-up categorization of results. 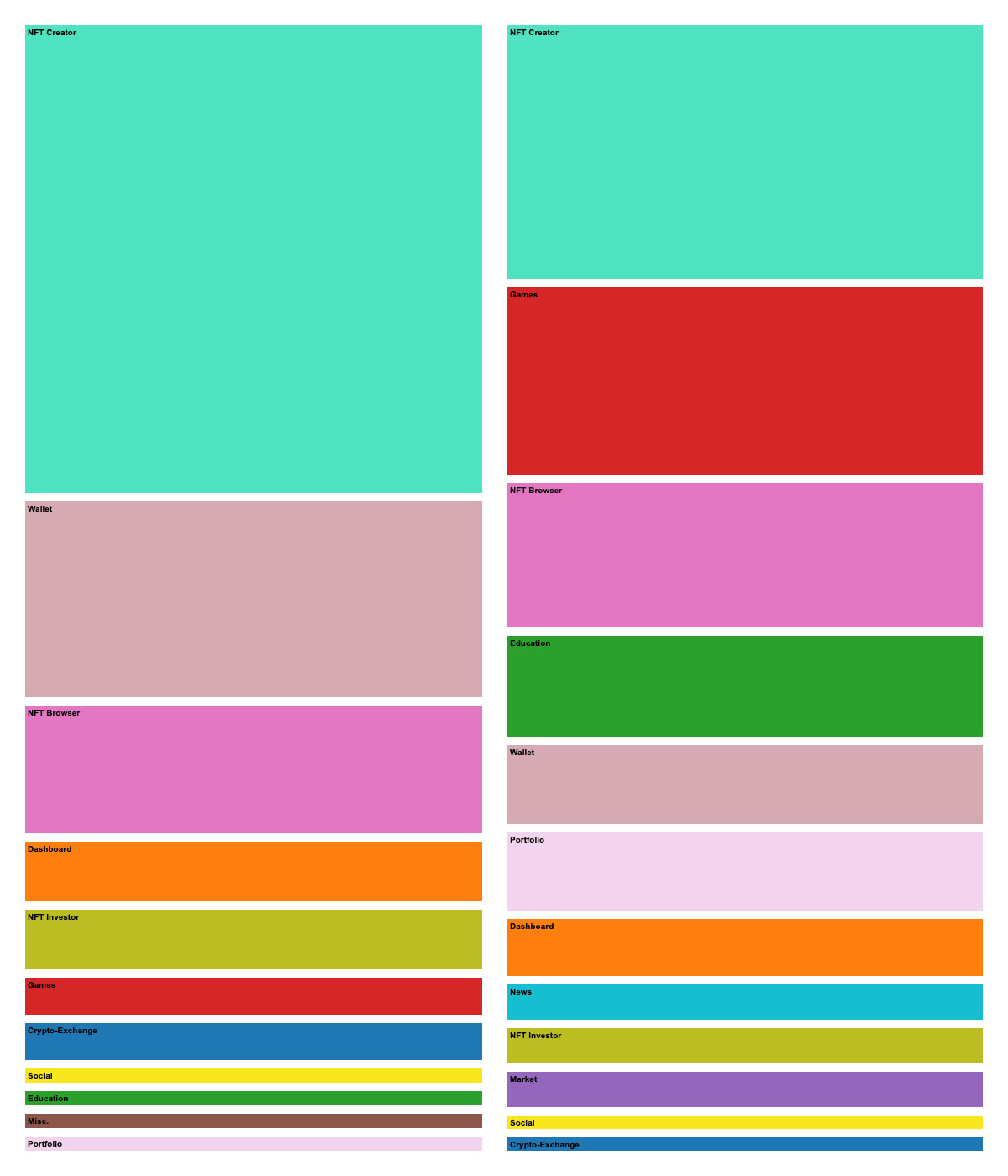 In the traditional app space, we found a predominance of what we call ‘NFT Creator’ apps; these afford users the possibility to design and mint NFTs, often using kitschy filters, generative algorithms or simply by uploading a photograph or image. With names like NFT Pixel Creator, NFT Creator or Meta NFT Maker, many contain fees and ongoing subscriptions. They capitalize on the crypto-hype by mixing genres of user-generated content with the promise of monetization. ‘NFT Browsers’ are also common, allowing access to NFT collections on the blockchain, but not necessarily the possibility to make purchases or transactions. The restrictive policies of Apple and Google can be felt here, perhaps conveyed most dramatically by ‘Portfolio’ apps like NFT Gallery which provide users the option of simply displaying already owned NFT collections within a viewer, gallery or even as smartphone wallpaper. In such cases, the functionality of the smartphone is reduced to that of a display cabinet or picture frame, rather than opening up innovative means of exchange. In general, there is a sense of distancing from dapps in both stores, with ‘Wallets’ being the key point of access into crypto-development. 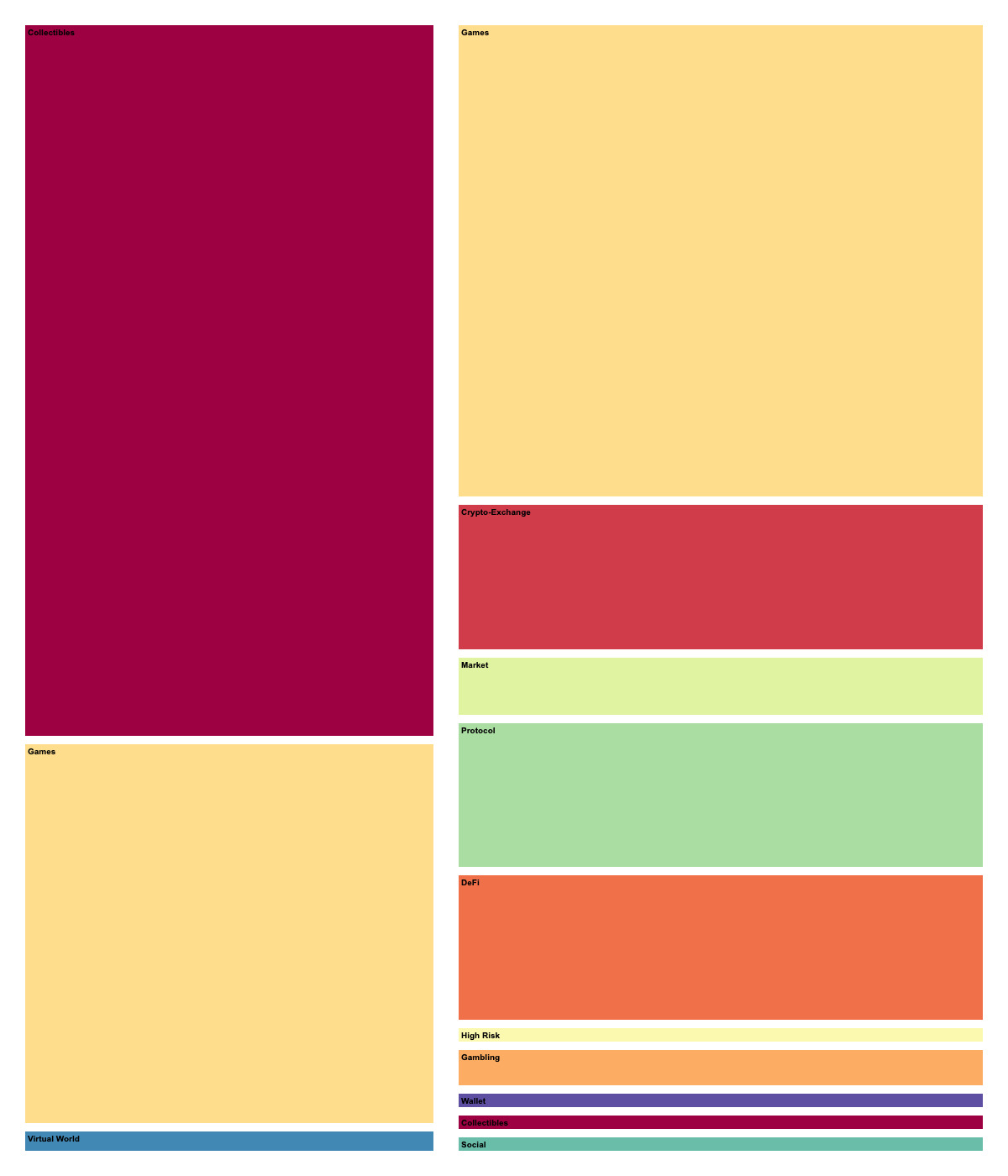 The NFT query for DappRadar, meanwhile, tells a much different story. We are immediately taken into the weird space of software development and services offered on blockchain. The space recalls Manovich’s concept of deep remixability as familiar software techniques or ‘ways of doing’ are merged into monstrous, financial forms. In mapping DappRadar, we contrasted the NFT query with the most popular for the month of January 2022 (Fig 2.). For NFTs, popular traded collectibles like Bored Ape Yacht Club, CryptoPunks and Art Blocks all prominently surfaced. While perhaps considered colloquially as the genre of cartoon ape GIFs, these kinds of collectibles can technically be considered dapps since they layer interfaces onto smart contracts and aim to popularize blockchain infrastructure in the process. This kind of ‘dapp store’ research also opens up the possibility of mapping popular NFT aesthetics, from the tropes of street art to pop generative art and 8-bit cyberpunk iconography. As Ruth Catlow has recently observed, NFT aesthetics are highly expressive of the communities from which such originate, particularly with the predominance of game cultures, and their associated notions of worldbuilding and gaming mechanics, which are readily translated into the context of crypto-markets. Indeed, this influence is clear in DappRadar’s listings, where games such as Splinterlands, Alien Worlds and Farmers World have become some of the most popular dapps. As a final stage of our analysis, we focussed on one of largest crypto-games, Axie Infinity, to examine how relations between apps and dapps are unfolding within this important genre.

While doing our research, Axie Infinity was listed the most popular NFT dapp with around 660,000 active users. The game was developed by Vietnamese studio Sky Mavis in 2018 and was valued at $3 billion in October last year. It’s essentially Pokémon on the blockchain, where players earn tokens by training and fighting the ‘Axies.’ It has been widely reported that around 40 percent of Axie players are based in the Philippines. The developer says 25 percent of its players are ‘unbanked,’ so Axie wallets have become their first access to financial services. In some cases, people have been paying their rent using the SLP token in the game. While major questions have been raised regarding its sustainability, Axie Infinity nevertheless offers a sobering glimpse into the possible acceleration of playbor, exploitation and hyper-financialization enabled by dapps.

For this case study, we asked: are there support apps or third-party apps developed on traditional mobile app platforms for the dapp? And if so, what kind? What do they reveal about Axie Infinity? 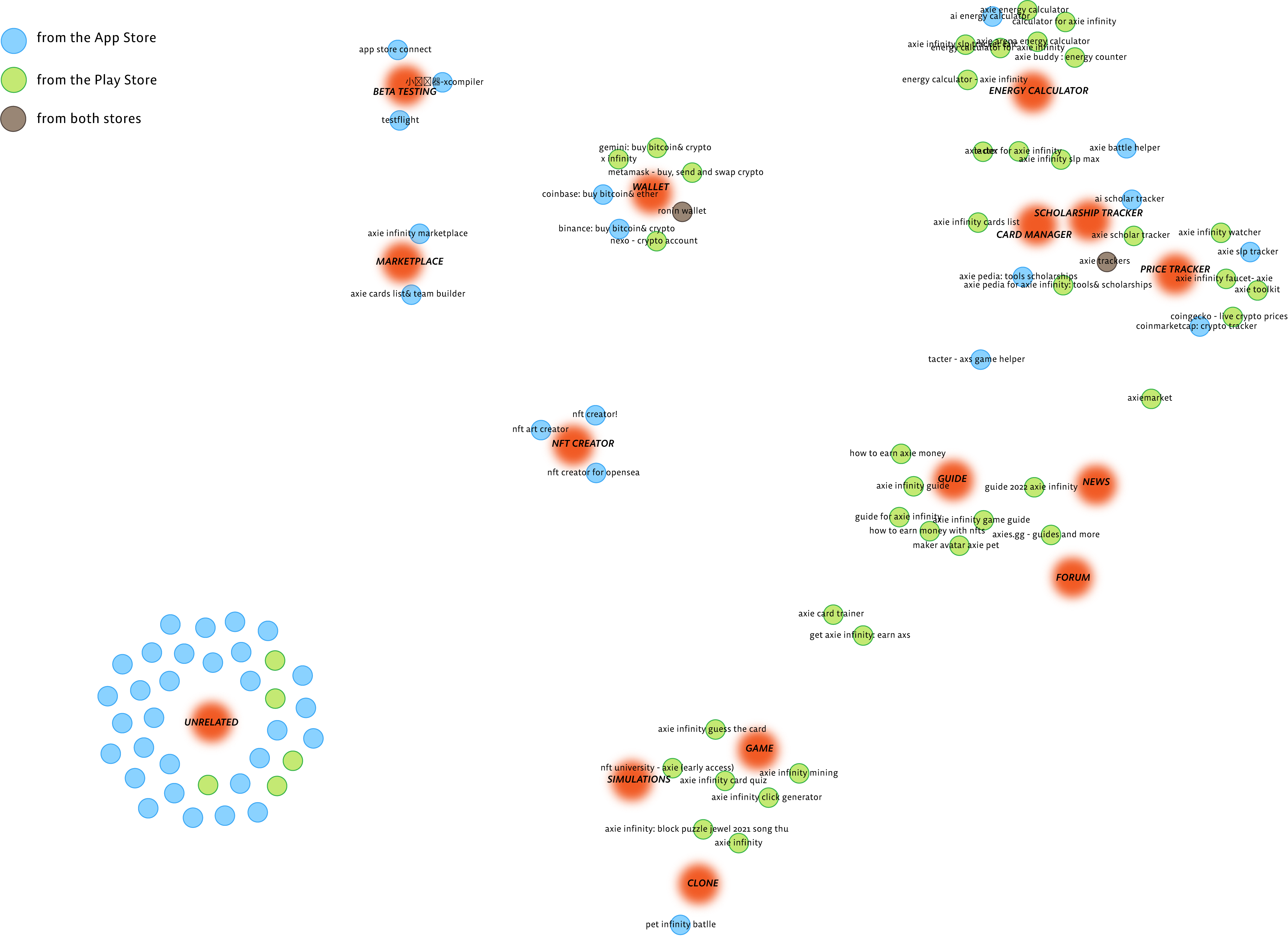 To answer these questions, we scraped 50 entries for the query ‘Axie Infinity’ in both GooglePlay and the App Store, and then categorized the results using a bottom-up taxonomy. Interestingly, while the game is not itself available on GooglePlay or the App Store, there is a significant amount of app development to support it.  Fig. 3 visualizes the results as a network graph, revealing clusters of app types which provide a sense of the culture of play around Axie Infinity. From guides to assist players learning the game to price tracking of the game’s crypto-token, from clones from other developers trying to parasite on the trend to gameplay managers and even training simulators. More support apps have been produced on GooglePlay, perhaps because of the larger user base for Android across South East Asia.

One type of support app worth noting is the scholarship manager. Due to the high cost of entry into the game, more established players have begun lending new players crypto to play, but then taking a cut from any winnings in return. This is called granting them a ‘scholarship.’ It essentially turns some users into assets or sources of rent – they become assetized – revealing another aspect of the hyper-financial character of dapps, but one that spans both blockchain and mobile app infrastructures.

With this quick dive into dapps and apps, it’s obvious the situation is far more complicated than incumbents versus challengers, web2 versus web3, centralized versus decentralized. As a complex cultural and socio-technical process, it might be more accurate to consider the cryptofication of apps and appification of crypto. Significantly, this is happening on multiple levels, from aesthetics to protocols, from the composition of dataflows to cultural practices like play, at times being mutually reinforced, at others being closed off or redirected through platform governance. How this ultimately will play out, and what kind of new tensions and cultural forms will emerge with increasing regulatory interventions, is ultimately an open question that demands ongoing ‘dapp studies’ research.

Michael Dieter is associate professor at the Centre for Interdisciplinary Methodologies (CIM) University of Warwick. His research interests are interface criticism, app studies and media aesthetics.