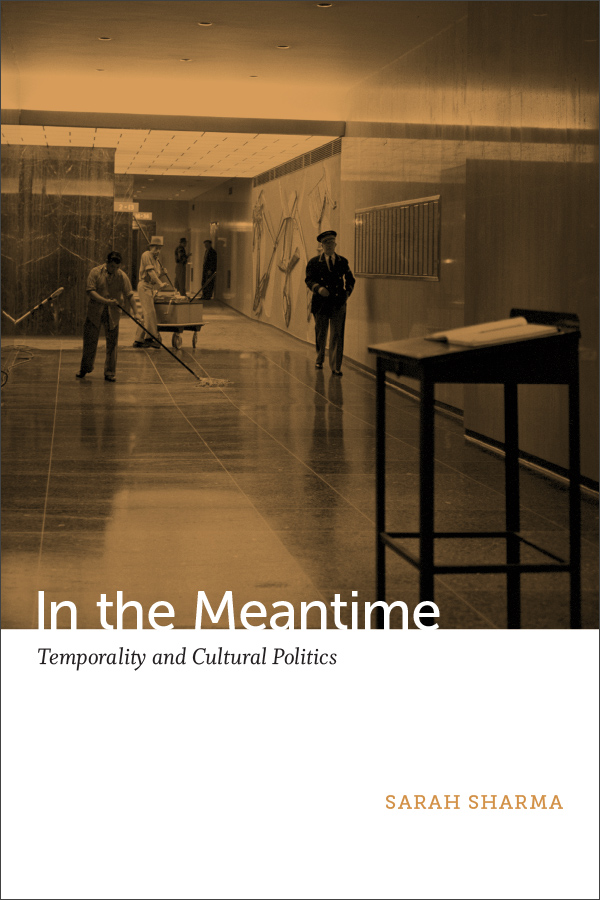 Review of Sarah Sharma (2014) In the Meantime: Time and Cultural Politics, Duke.

Why is the assumption that we are living in fast times so easily accepted, so little discussed? How is it possible that most discourses on 24/7, accelerated society and fast capital end up confirming speedup as the reality?, author Sarah Sharma wonders. She is very critical about current discourses in speed theory. There is a need, she argues, to identify different temporalities of power relations and to investigate experiences of time within specific political and economic contexts.

In The Meantime reads like a novel. Sharma’s sharp attack on speedup believers is accentuated with detailed portraits of the lives at the core and at the margins of global capital. It is this vivid composite of detailed narratives that describe the social fabric of time which drives you through the pages. The four chapters of the book are organized each around three portraits of professionals: frequent-flyer business travellers, taxi drivers, corporate yoga instructors and devotees of the slow-food and slow-living movements.

Sharma describes temporal power relations with special attention to investment and disinvestment in the quality of lifetime.  The productivity of her perspective comes out with particular clarity in the conjuncture of her chapters on frequent-flyer business travellers and taxi drivers. While the exhausted, jet-lagged bodies of business travellers are treated with air beds and napping pods, the taxi drivers waiting at the airport are obliged to pass more and more costly tests to be able to continue the same job. There is an obvious mutuality of investment and disinvestment of two parties in the time of the other.

The shift from clock-time control to quality-time management, Sharma illustrates with great wit in the chapter on corporate yoga instructors. Here, the authors turns to the seeming contradiction of the physical repetitiveness and immobility of long hours at the office and the desire of for an energetic, holistic and indeed, fulfilled life? Thanks to corporate yoga instructors this contradiction can be overcome at the office itself. At lunchtime the yoga teacher flies in and quickly transforms the workspace into an open studio where body and mind experience the real, the instant and the now. Sharma concludes that the ideals of supposedly independent yoga teachers and corporate interests can actually merge into one mantra: ‘this is your life, it is now.”

Sharma has found a very convincing perspective in which the human body becomes the nexus of the shift from spatial to temporal power relations. Her image of the social fabric of time is great in its vividness and physicality that she derives from the insistence on detail in her analysis. At the end of her book she pleads for temporal awareness, meaning a re-imagining of time as entangled and collective. Perhaps surprisingly, the only 150 pages of In the Meantime can really help you to achieve that. And the world does look very different this way.