We had the pleasure of welcoming three speakers with very different backgrounds to the first talk of the second day of MyCreativity Sweatshop. Zach Blas, Rob van Kranenburg and Frank Rieger were invited to discuss the issue of “the creative city as an internet of (bright, young) things.” 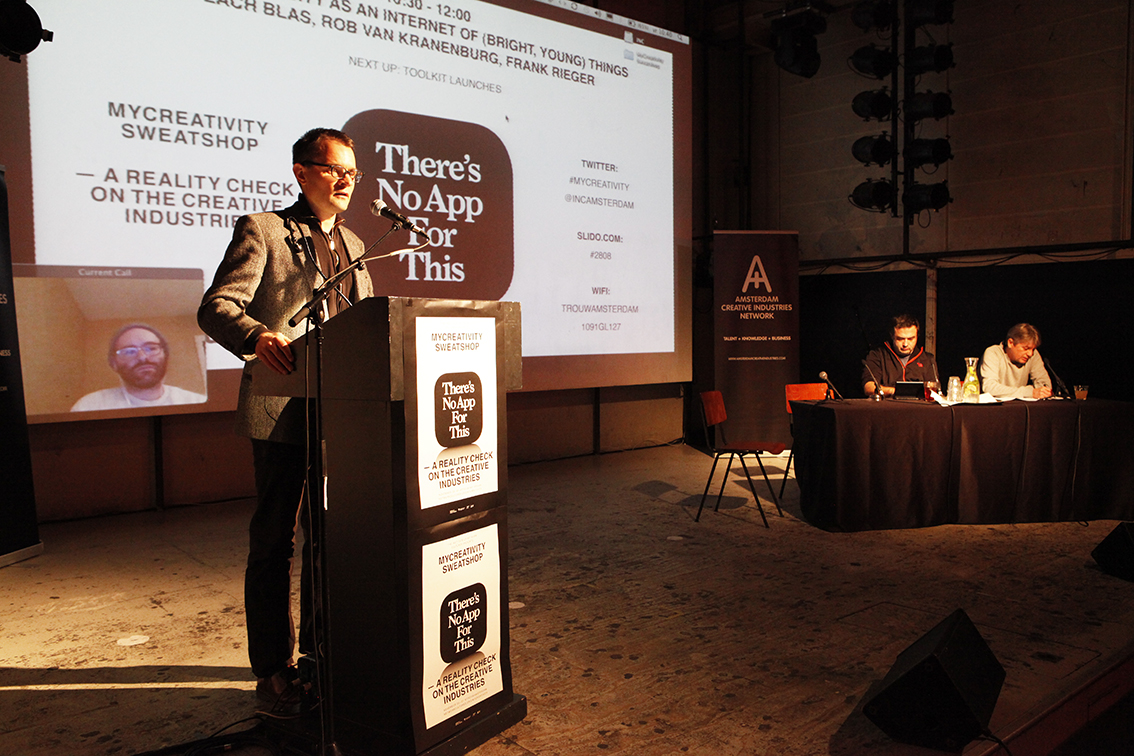 As the creative city mutates into the smart city, we are promised a super-connected life where the objects that surround us organise themselves in an Internet of Things (IoT), offering advanced connectivity of devices, systems, and services that goes beyond machine-to-machine communication. Our needs and desires are constantly tracked and fulfilled in real-time. What used to be the domain of architects is now dominated by engineers. Our core values as citizens have changed to comfort, security and sustainability. However, does this new form of interconnection go hand in hand with the regulation of our behaviour down to the level of desire, emotion and affect? Zach Blas, Rob van Kranenburg and Frank Rieger all have strong opinions on the proposed concern. 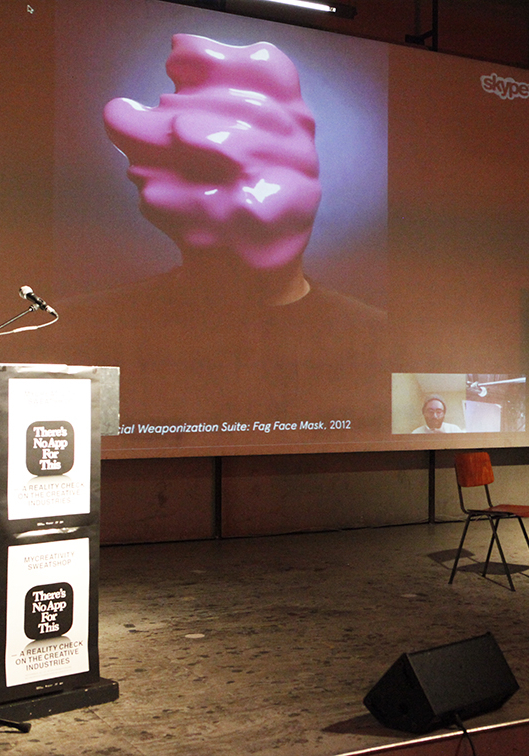 Zach Blas is an artist, writer and curator engaging with technology, queerness and politics in his work. He is currently working as an Assistant Professor in the Department of Art at the University at Buffalo, New York. As Buffalo experienced heavy snow storms this Friday, Blas was unfortunately unable to attend in person. He did however take part in the discussion via Skype.

Blas follows an artistic approach when dealing with the issue of smart cities. He introduced us to a variety of his artworks that consider biometric facial recognition as an emerging form of global governance alongside aesthetico-political refusals of recognition, such as masked protests. To Blas, biometrics present a future in which humans will be reduced to an objective truth. His opinion on biometrics becomes especially apparent in “Face Cages”, a project that deals with the issue of abstraction and political violence. Biometrics are presented as a 3D-metal-object – a cage of information which does not fit very well and becomes slightly painful to wear after a while. A certain similarity between the cages and medieval torture devices can indeed be recognized. 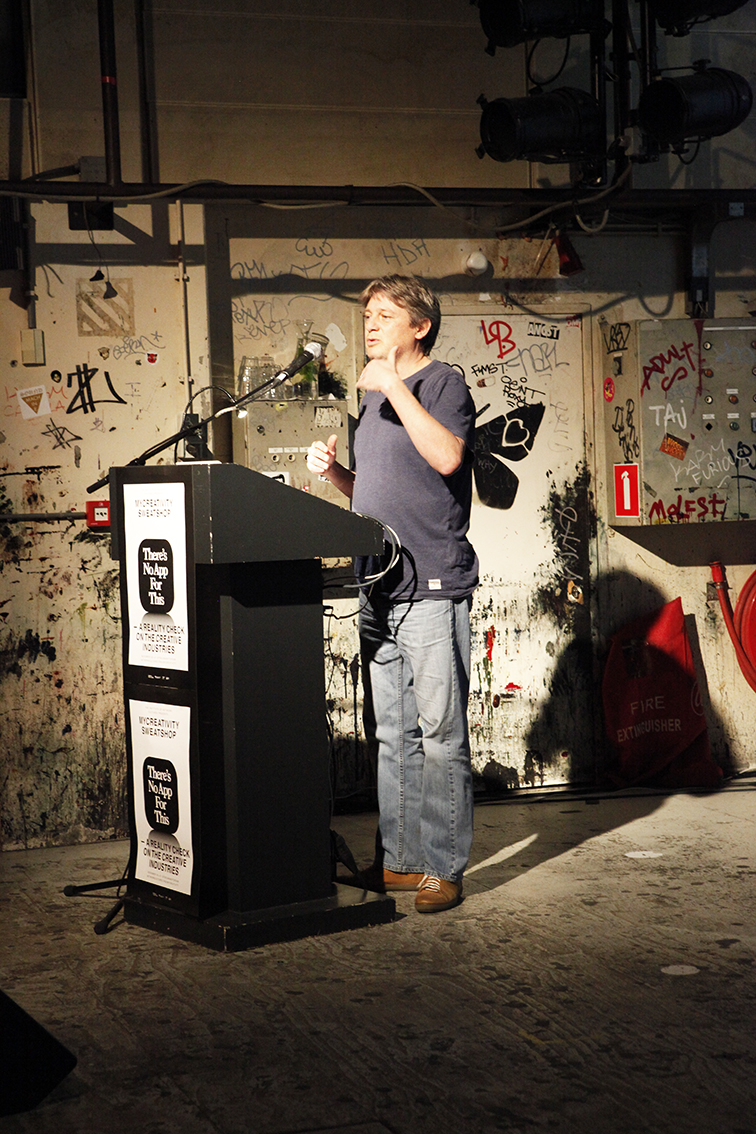 Blas’ artistic approach was followed by a rather practical understanding of smart cities presented by Rob van Kranenburg, who is the co-founder of bricolabs and the founder of Council and is currently an expert at the EU Commission (HLEG on IoT). He has also written and spoken about the IoT for the last 10 years. Moderator Florian Cramer introduced Rob van Kranenburg as possessing the interesting characteristic of being critical while remaining positive. Generally, he is very positive about global governance, however, only when things will work out the way he wants them to. That is, Van Kranenburg does not believe in inefficient layers of governmental organisations or military apparatuses. He is aware of the potentially disastrous implications of digital wonderland: “we never had the kind of wisdom that we have today. We don’t know what is going to happen.” This is why we now need to line up to find ways to transform the smooth stream of data and control into truly participatory infrastructures. If this does not work out, Van Kranenburg envisions about 500 military zones called smart cities in the future and Mad Max somewhere in between. 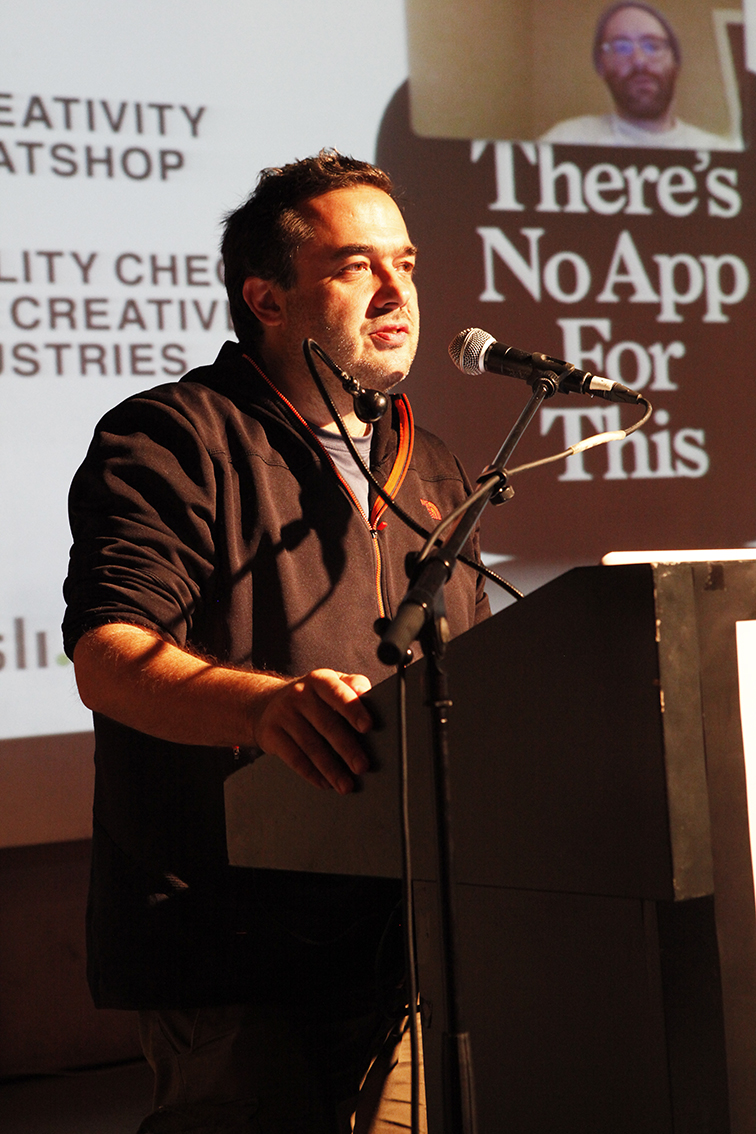 The third speaker, Frank Rieger, is a German hacker, author and internet activist, as well as a prominent speaker for the Chaos Computer Club. To him, the idea of smart cities is closely related to optimisation goals. However, quite often those optimisation goals are of a commercial nature, which leads him to the claim that smart cities do not have much to do with ecological targets. It would basically be enough to know how much energy we are using to raise ecological awareness – everything else is just additional “smart stupidity”, which could be dispensed easily. Today, he says, we still have the wrong optimisation goals, and setting those goals right will be the next battleground within democratisations. The government and corporations are the wrong institutions to set optimisation goals. For the government, surveillance aspects will always be the centre of attention and corporations will always follow commercial targets. We need other institutions to set up those goals in a sense that is proportional to their effect on people.