The panel discussion on Artistic Autonomy vs. The Creative Industries at the MyCreativity Sweatshop targeted the dilemma that subsumes the position of artists within the ideological constructs of autonomy and creativity.

On the one hand, the functionalist reality of the neoliberal policies and practices of the creative industries creates a space where creativity can almost do without the artists. On the other hand, there is still popular support for artistic autonomy and the protection of the arts and artists from the effects of society at large. 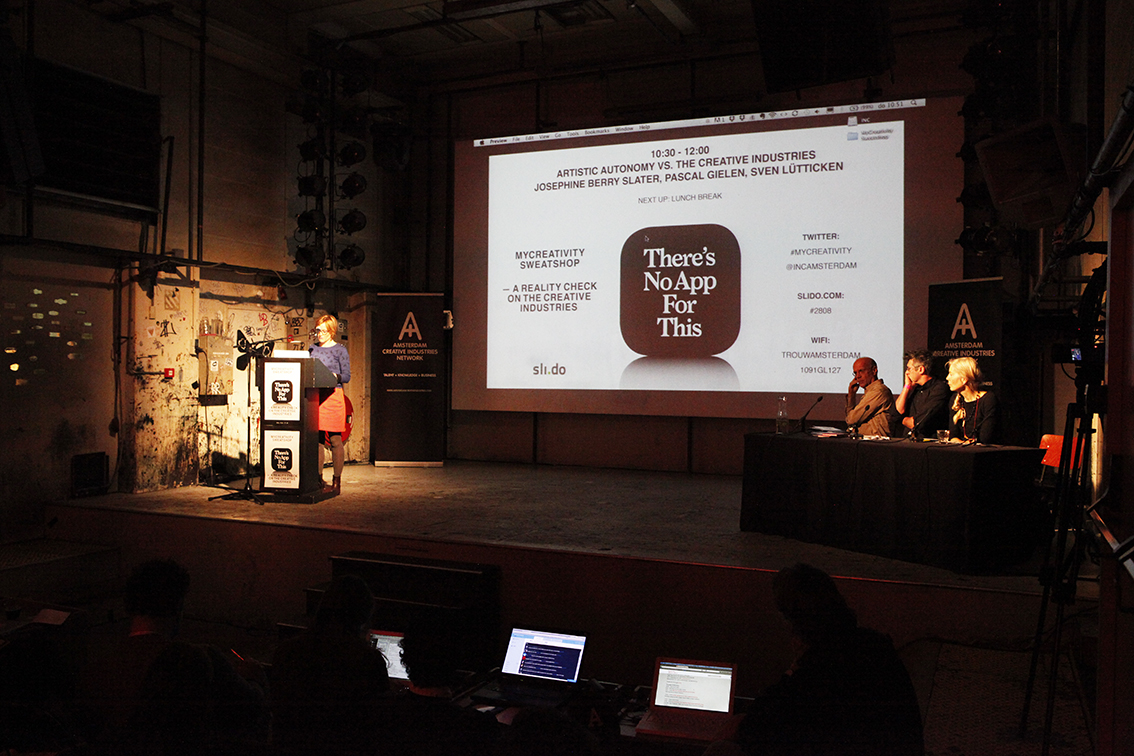 In the context of this dilemma, the panel’s three speakers addressed the questions: Do the creative industries represent a sinister threat to artistic autonomy? If so, how can/do artists fight back? 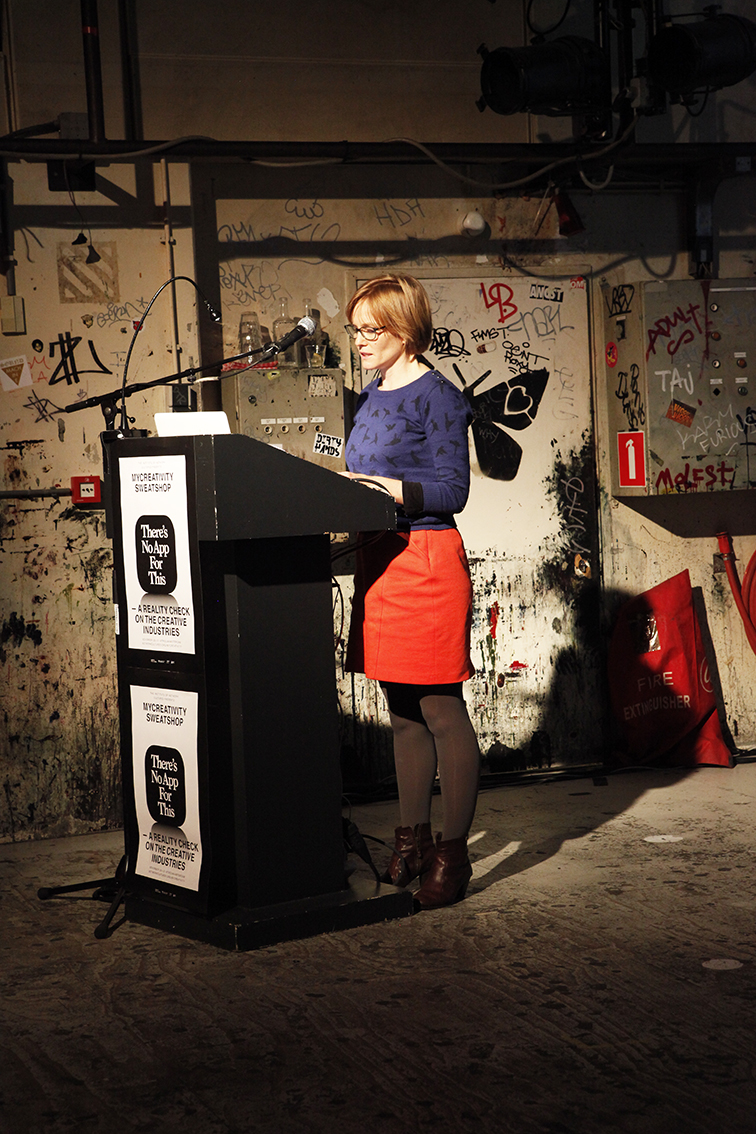 Josephine Berry Slater, lecturer for the Culture Industry MA at Goldsmiths College, established that the crisis of creativity is intertwined with that of social reproduction. Fundamental worries, such as affordable housing or decent healthcare, must be eliminated before time and energy can be diverted towards productive creativity.

According to Slater, in the capitalist city, art occupies a curious space determined by the funding and political agreements between institutions of culture, and governmental and corporate entities. Here, “the aesthetic, communicative and remedial qualities of art” are called upon to graft over cracks caused by capitalist society and to heal the effects of urban renewal and regeneration. Slater expanded on this position by asserting that:

1. Within the relationship between artistic/cultural entities and funding/political entities lies a paradox in which the autonomy and neutrality of art and the artist are both essential to and yet challenged by their economic functioning.

2. The democratising tendencies of autonomous art draw it into spaces of social reproduction and therefore into the very centre of the conflict zones produced by capitalism (for example, in housing estates and disused warehouses).

To understand the connection between art and urban renewal, Slater discussed the shift from self-defined engagements between artists and communities to “the increasingly formulaic and institutional choreography of such encounters” – often to the ire of the communities involved. The democratisation of art and aesthetic judgement is evident through the involvement of the communities in question:

“The dignity of those lives deemed economically worthless is restored to some degree. And, who knows? Perhaps this also lends credibility to the idea of an autonomous art that is something more than mere lubricant to the forces of accumulation.” 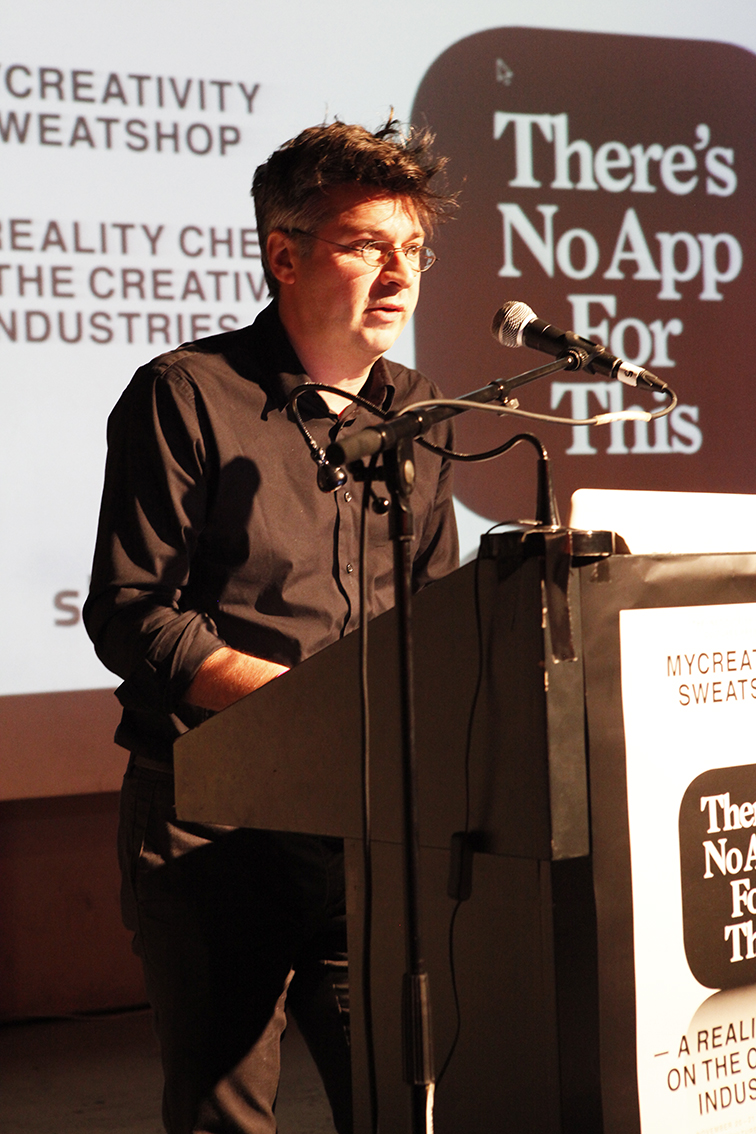 Pascal Gielen, Associate Professor in the Sociology of Art at Groningen University, used five statements to eliminate the confusion between artistic and social autonomy:

1. Autonomy is the foundation of modern society; it does not only belong to the arts. Spheres of society other than the arts, such as justice and politics, also depend on autonomy so as to protect democracy and avoid corruption.

2. Autonomy is necessary to function but it is no longer protected on the collective level. Focus on one’s creativity diminishes because of being preoccupied with defending one’s individual autonomy as a creative worker. The disappearance and reformation of classic institutions of protection for artists have exacerbated this.

3. The fundamentalism of creativity needs the deconstruction of autonomy. The creative industries simultaneously call for the freedom of creative workers while also imposing a risk aversion mentality and processes of repressive liberalism. It is a system that leaves creative workers politically weak with no union protection or appropriate monetary compensation.

4. All these institutional changes take focus away from one’s professional skills. Creative acts are no longer instrumental in giving form to society and no longer focus on one’s real skills and creativity. Rather, it is now labour that provides form to life, autonomy and then to creativity – but not the other way around.

5. We need creactivism. Gielen called for a repoliticisation of the creative act. He explains that, by questioning what creative acts are for, we understand how they give form to society. Creactivism shakes the dominant ideology and (re)generates autonomy by building and defending a new autonomous space in wider society. 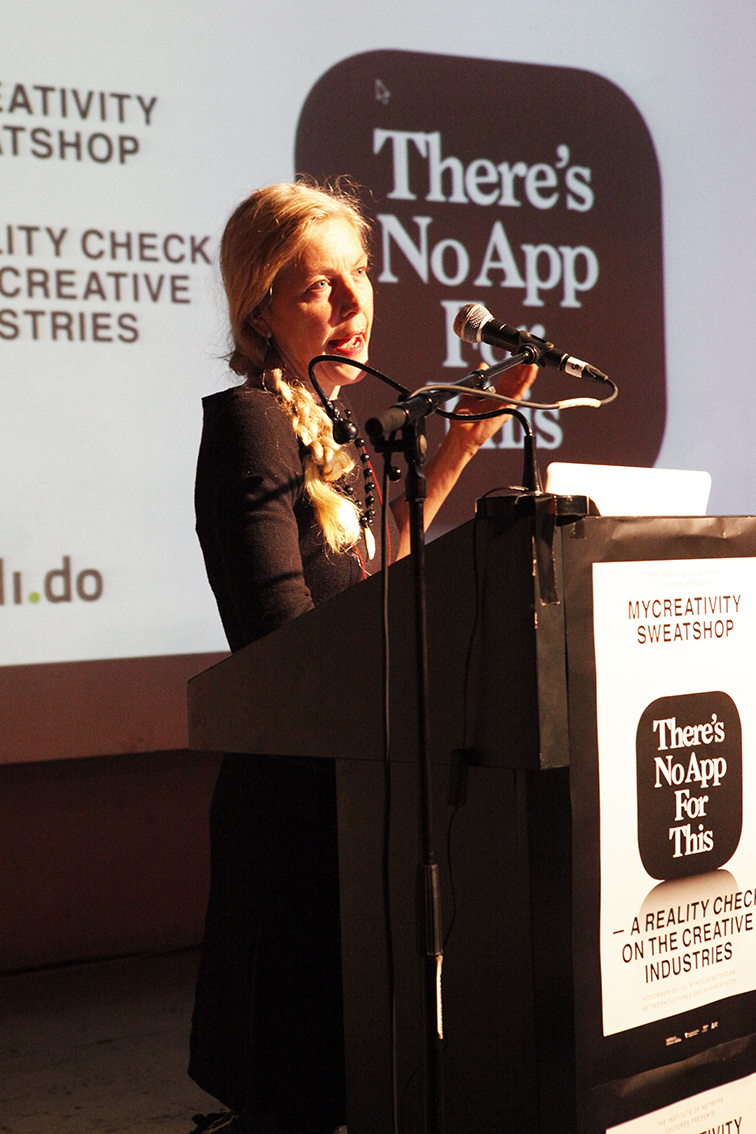 Klaar van der Lippe, a visual artist with a background in contemporary art and architecture, followed Gielen with the phrase, “Get ready to be creactivated!!” Van der Lippe viscerally explained that the autonomous space for an artist is about finding truth rather than finding a solution. When finding a solution, you allow somebody else to define the truth first, for example ‘money needs to be made’ or ‘time needs to be gained’.

Creactivism takes you back to being the author of your own truth, and this is the capital that we all have. Conflating art or creativity with a luxury that people can only afford once their needs are met detracts from the fact that the ability to look at the world and find truth is something that is not luxury, it is part of being human.

Over many years of working as part of a community to learn if truth finding can be done collectively, Van der Lippe has seen a distinct change. The artistic initiative now belongs to institutions and not to artists. People now take part in the activity but not in the truth finding process. “It has become normal that creative workers are not the founding fathers of reality but are the decorators… lending some truth to somebody else’s business plan.” 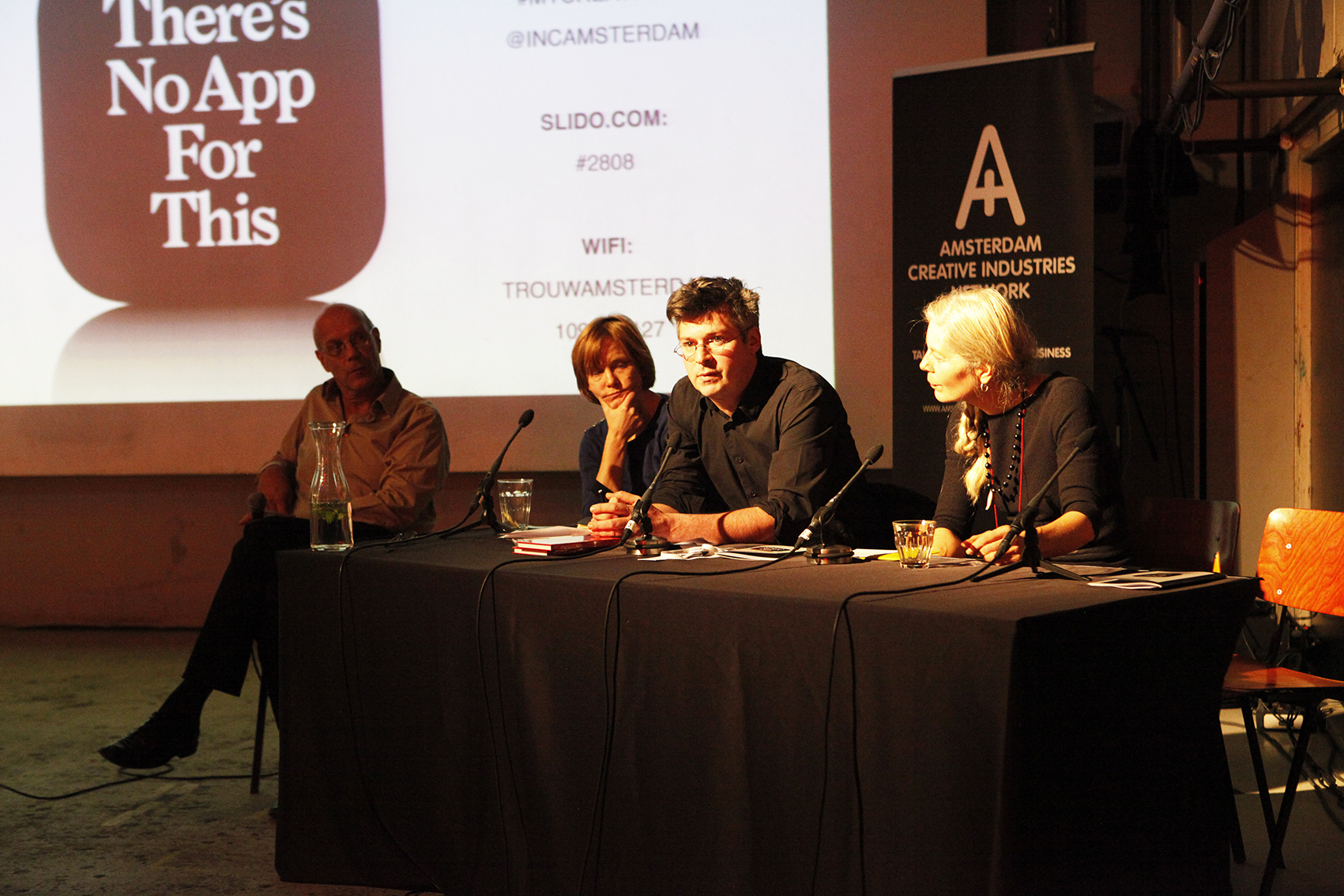 The three speakers explored “Artistic Autonomy vs. the Creative Industries” in different and yet complementary ways. This emerged through the discussion that followed their talks, leaving the audience with a sense that, within this issue, space and place are crucial factors:

– Slater broke down the idea of sovereign space and showed that autonomy is in fact always heteronomy because of elements of power and production that are imposed on creativity.

– Gielen was preoccupied with the importance of understanding what autonomy is, explaining that we need creactivism to carve out a new autonomous space within wider society and not only through the guides of the creative industries.

– Van der Lippe finished off the entire discussion with the question, “What is a sense of place?” She called for creactivism again and to break the monopolistic power over public space held by institutions by making free art in that same public space:

“Break the power! Use crayons; use whatever low cost thing to make visible another voice and another way of looking. That’s our responsibility.”