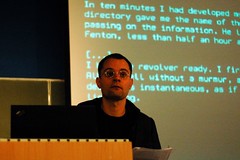 Today’s final speaker is Florian Cramer of the Piet Zwart Institute, who has a nicely low-key website. Florian’s work deals with text, code and aesthetics – one piece of his is the extended essay, Words Made Flesh: Code, Culture, Imagination, which is a kind of alternative history of code. His presentation here is about Text and Networks.

Florian asks, what is the effect of having the metaphor of the network at the center of new media studies? That is, metaphors can come to act like maps or models, making some lines of inquiry more amenable while closing others off. To answer this, Florian takes us back a little and addresses the relationship between the words network and text. Etymologically, there is little difference, as text is closely aligned with the word ‘web’ (it comes from ‘textus’, basically meaning ‘something woven’).

He notes how conceptions of text have changed over time, and asks how a term like hypertext affects our understanding of it. Via Borges’ Garden of Forking Paths, and contra hypertext theorist Stuart Moulthrop, he argues that since text itself contains hyperstructure (its paradigmatic, or associative links), the term hypertext is actually redundant.

There is also the issue of how practice influences this. Florian says regular computer users have no problem understanding what text is. It is simply an amount of discrete (in most cases alphanumeric) symbols. And bringing meaning into it, users know that 1) syntax is that which is fully computable and 2) semantics is computable only as syntax.

So again, what happens when we make the network the emblem for current complexity? We should be careful, Florian says, not to assume a new network theory is one that has progressed beyond its roots in systems theory. Also, there is the danger of favoring the network, in assuming it is something positive only because it is the object of study.

With that in mind, we move on to Friday morning’s speakers – ironically enough, three premiere network theorists.