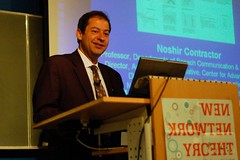 Noshir begins with a story of the social life of (technologically-enhanced) pets. Your smart-tagged dog can meet other dogs and exchange information. When your dog returns home, that information can be downloaded, you can learn about your dogs’ friends, the owners of those dogs, set up dog dates and so on. What is new today, for us even more than for pets, is the extent to which we use technology to find new social networks rather than cementing existing ones. And this creates the need for a multi-theoretical, multi-level approach to understanding social behavior.

First, theorists must begin to account for both the complex heterogeneity of social networks (the array of both human and nonhuman agents), as well as the multiple ‘potential’ levels of social networks – not just who you know, but also who they think you know – as well as the multiple knowledge networks – what you think they know. This can get confusing, but the point is that cognitive, potential links are links nonetheless – unreal but with real effects, since we act and make decisions based on them.

The new approach must also be multi-theoretical. Answering the question of why we create and sustain social networks, one might turn to theories of self-interest, theories of resource exchange, theories of contagion and theories of co-evolution, among others. Since some of these contradict one another, the question becomes, under which conditions is one ‘correct’ and not another?

Finally, the multi-theoretical, multi-level framework is also multi-methodological. Noshir’s research involves text and data mining, network mapping and statistical modeling to uncover why social links have been made. Soon he will be using data from World of Warcraft and Second Life. His research so far has shown how some theories of social action ‘fit’ better in certain situations, and Noshir says this depends on the goals of the network being studied. The aims of a smart-mob are vastly different to those of A universal theory of networks is then out of the question, but increasingly we’re able to empirically test the different theories in different situations, making possible a meta-theory of networks.