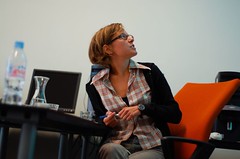 The first round of parallel sessions is underway, and a crowd has gathered in a computer lab at the Media studies department to discuss ‘the link’.. A preview comes in the form of one participant’s notes, where I spotted the question, in bold, “What about Google?!” 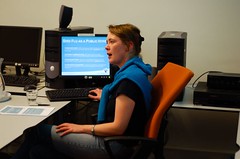 We begin with Iina Hellsten of the Virtual Knowledge Studio, who considers the phenomenon of bird flu as a public hype, in connection with the larger question of what constitutes critical events in evolving networks.

Drawing on sources ranging from medical journals to newspapers and blogs, one approach of Hellsten was to track the use of the terms ‘bird flu’ and the more technical ‘H5N1′, noting the moments one overtakes the others in different kinds of media. The massive uptake of the more technical term in news media, then, might coincide with a critical shift in the perception of the problem as one recognized scientifically.

Another indicator is the presence or absence of links (understood more broadly than hyperlinks, including references in print media): before October 2005, she says, there were very few ‘links’ between news media and medical journals. After such a shift, different networks characterize themselves by the various directions in which they take the story. 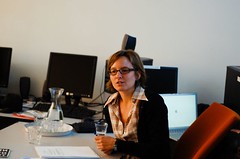 The second speaker is Astrid Mager from the University of Vienna, who will talk about networks is online health information. She begins with the imagination of the Internet as an inclusive information network. The metaphors this is built on, she argues, are not neutral and have a normative effect on Web practice. It is with this in mind that she turns to a case study on networks among providers of information about diabetes. Conceptualizing the linking practices, she notes some outside influences, such as the need to link in a way that ‘pleases’ search engines in order to ensure visibility.

How does this effect the user? Her research suggests that users tend to stick to the top few Google hits, affording certain pathways: in the diabetes case study, professional health portals dominate the top ten. But we should not assume too much about users, she says, and her interviews have revealed that users approach Google with some informed skepticism. Interesting, links were considered to be chaotic – taking the user away from the task at hand – and associated more with promotion and advertising. Concluding, Astrid suggests we should thus also think beyond the metaphor of the network, and adjust our methods accordingly. 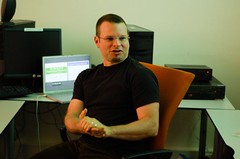 Clifford Tatum of the University of Washington presents an overview of his large research project (together with Kirsten Foot) on a life cycle approach to networks. Networks evolve, he says, and they constitute ecologies (especially in the age of Web 2.0). To study these, one has to take account of network heterogeneity, and must also unpack customary definitions of ‘the link’. Are all hyperlinks intentional? What constitutes a permalink, and how do aggregated links fit in? What about the less formal, email-to-web links?

The life-cycle overview: networks have ad-hoc beginnings, before growth and innovation occurs and (sometimes) infrastructure is implemented. Ad-hoc networks are bound or brought together around objects like texts – one thing that stands out about them is their transparency. During growth and innovation, boundary objects are gateways or portals and the network begins to self-organize (often because of competition and volatility). A critical mass occurs when a network gains infrastructure – an example is Wikipedia – and the boundary object is (in this example) the (externally) validated knowledge cluster. Infrastructure makes stability possible, but also requires regulation and policing – such networks, Clifford says, also form a kind of spawning ground for new ad-hocs. 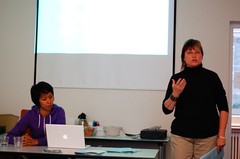 Lastly, Lilly Nguyen and Leah A. Lievrouw present their work, “Linking and the network imaginary”. They begin by thinking about the network perspective – what Emirbayer and Goodwin call the ‘anticategorical imperative’, which refers to the tendency to prioritize relations over categories. Their object of study is what they call the Network Imaginary, the “space of link generation and dynamics”.

In theorizing this, they draw on Leah’s previous work on ecologies of attention and forgetting – especially now in an age of ‘archiving fever’, where we assume everything is ‘captured’, we need to think about the ways place and architecture (broadly understood) make possible certain forms of forgetting or inattention.

The network imaginary, in a similar way, becomes important as a tool for conceptualizing one’s possibilities of action. To understand this, we need to get beyond linking as deixis (pointing). Linking is not always functional, rational. And what about linking dynamics, temporal patterns of change in linking patterns? The researchers offer a more complex taxonomy, including links as a form of modeling/imitation, links as performance and performativity, links as evidence and links as exchange (they remind us that the list is not at all exhaustive). This relates back, Lilly says, to the ‘multi-dimensional’ notion of networks forwarded by Noshir Contractor earlier today. That is, things like performativity challenge our notions of the network. 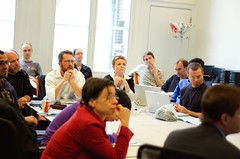 Leah concludes by offering suggestions of accounting for linking dynamics – thinking in terms of the extent to which links are about homogeneity and heterogeneity, integration and differentiation, a reflexive incorporation of systems perspectives (theories of complexity) and, following Anthony Giddens, thinking in terms of structuration – thinking of the ways linking can produce both/either determination and contingency, stability and change.