“Our very existence has turned into a question mark.”
–Nishitani

The future is cancelled. We know this by now. It’s not ‘postponed’, that sweet word being politely touted in exchange for the hard truth. Here in Zurich, posters remain in loom for a festival put on by a youth theatre that was to run from January until June – ‘The Future is Cancelled’ they jest in their title. These word still hang on the empty streets. When they were designed last year they would have appeared rebelliously tongue-in-cheek. Those who concepted the title may have felt antagonistic and playful. Running on the funny provocations that ‘youth’ knows it is allowed. Imagine that? What we thought was our future has been broken into fragments of oblivion. Eaten away until it doesn’t even matter. No need to ponder too hard on it. It’s gone. The slow cancellation of the future was not slow at all.

Mark Fisher once spoke of art and culture as providers of the resources for overcoming the decomposition of solidarity. What do we think of this now? Do we have trust in these to provide…anything? Too soft. Too frivolous. Too observant. Too narrating. Were those tools dreamed useful to a time before, a time that demanded less of practicality, of the toolness needed to construct. Give me an ensemble of strategies with some dominators I can hold onto. Video art does little more that soothe from the comfort of my couch. Touring museums virtually does nothing for my activism. At best, just another distraction.

We are not done with the despair over financial capital. Where’s my rent coming from? What’s next? Do the new collectives have to agree on one single thing and go for it? Possibly not. Neo-Gangs, arise! Actors, act! Or simply, let’s just let it go in a defiant resignation.

“The rise of chill as an aspirational state suggests that perhaps the best thing to feel is not much at all.”
– Amanda Petrusich in Against Chill, New York Times

The boyfriend is playing with new samples of magnetic fastening clips for belt buckles. The trail running kit he is designing looks like a toolset for the new future’s survivalist. He is a fashion designer but these objects and their ideas are not fashion. It looks like they envision all amateur athletes to become un-civilization activists. ‘Preppers’. They’re developing new camouflages and multi-purpose garments. The knowledge he gathered from his former-employer’s massive military garment archive is being applied.

Practice: We are still Pollys to TEOTWAWKI. YOYO.

Trying to find ways to expand this small apartment. For the moment, music seems to be helping. This recording by Garcia’s People was made exactly a month ago, at the small space Nublu NYC. It’s available on Bandcamp, one of the platforms forfeiting the fee they usually take from artists in an act of momentary support. Here is what the band’s Andy Cush says about it;

“… I remember standing onstage, eyes closed, deep in concentration, hoping everything would hold together the way it’s supposed to… Naturally, and happily, hardly anything went quite the way we expected onstage. The music on this tape is at its most alive when you can hear us abandoning the plan and surrendering to the unknown.

From the outset, we knew we wanted to push ourselves at this show to take “One Step Behind” as far out as possible, searching at its boundaries for previously undiscovered zones. I like to think we found a few… A map only gets you so far. Sometimes you just have to follow the sound.” 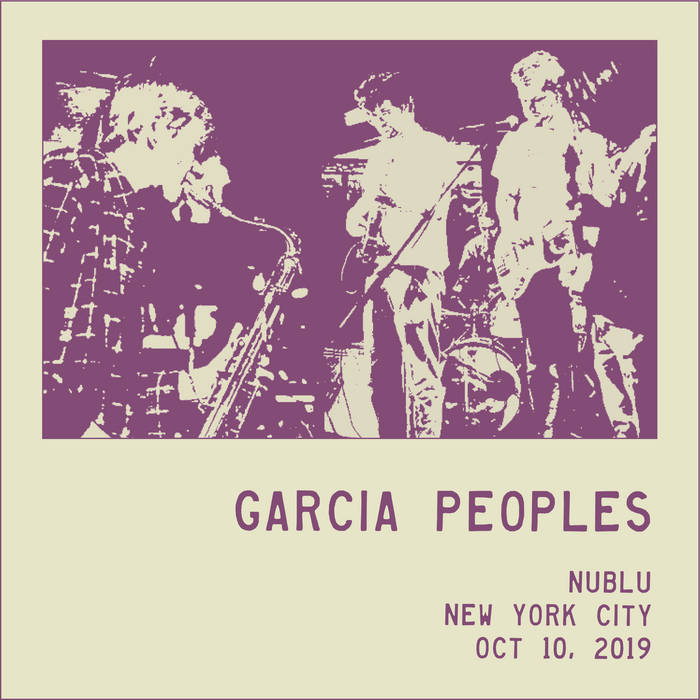 With the real streets still out of bounds, I try to cyberflâneur my way out. Except, all roads lead to lofi beats. These infinite streams of ‘chilled out hip hop’, aka chillhop, with their live chat feature firmly on and spelled out by emojis, dominate the paths. Tight algorithms said goodbye to the possibility of the stumble-upon-ness of digital flaunerism long ago. Locked down, locked out, and locked in to the prescribed serendipities of the now-internet.

Lofi Streams: The Soundtrack To Your Anxious, Studious Apathy

“Folks have nothing to do, and that leaves them open to exploring the furthest corners of YouTube. I think lofi streams are a great way to kill time, and meet people from around the world too! So it’s a win-win.” – Nick Stafford, channel operator of Nikolaas

Another hot spot on the lofi beats map College Music, tells that subscribers to their channel increased by 40 percent over the last 28 days. Founder Luke Pritchard told The Verge that total channel views are up 46 percent.

But the 24/7 lo-fi hip-hop ecosystem as most people know it today didn’t take shape until 2013, when YouTube opened up native live-streaming capabilities to any channel on the platform with 100 or more subscribers. If you search ‘lofi hip hop livestream’ on YouTube right now, you’ll find over 30 different live broadcasts dedicated to the genre. The most popular ones, from the channels ChilledCow, Chillhop Music and the aforementioned College Music — despite roots in the decades-old low fidelity hip hop of J-Dilla, Madlib and Nujabes (to name but a few) are all operated by twenty-something white European men, we should note — attract as many as 20,000 concurrent viewers or more at any present moment.

Since the COVID-19 pandemic, these streams have added new graphics that visualise social distancing. Try take a trip from your living room, only to end up in another lonely place. Their anime imagery reflects your exact situation. More paradoxically, the music is designed not to be heard. It’s made for the background. ‘Study/work beats that don’t distract’. ‘Stay productive’ is the slogan. 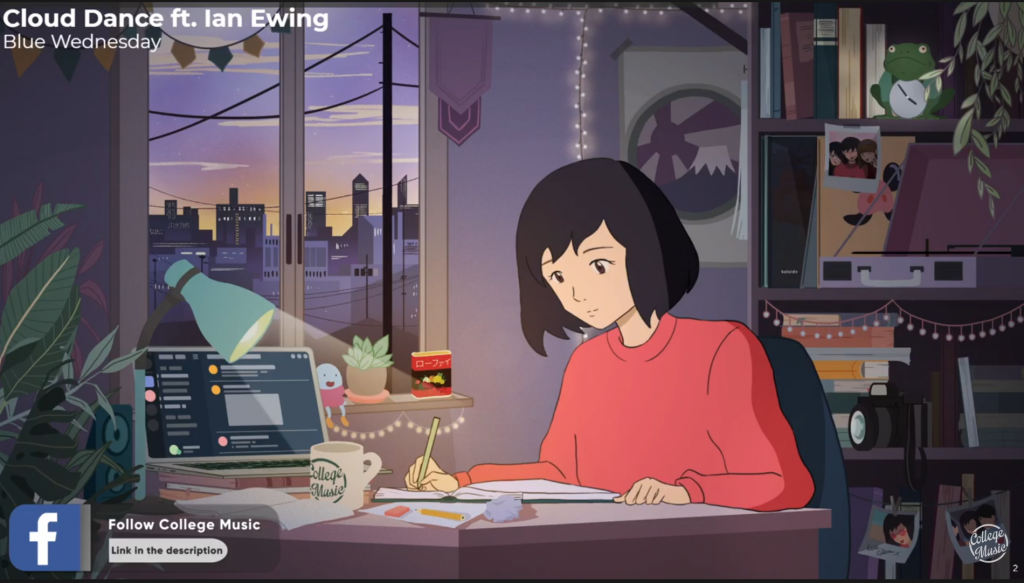 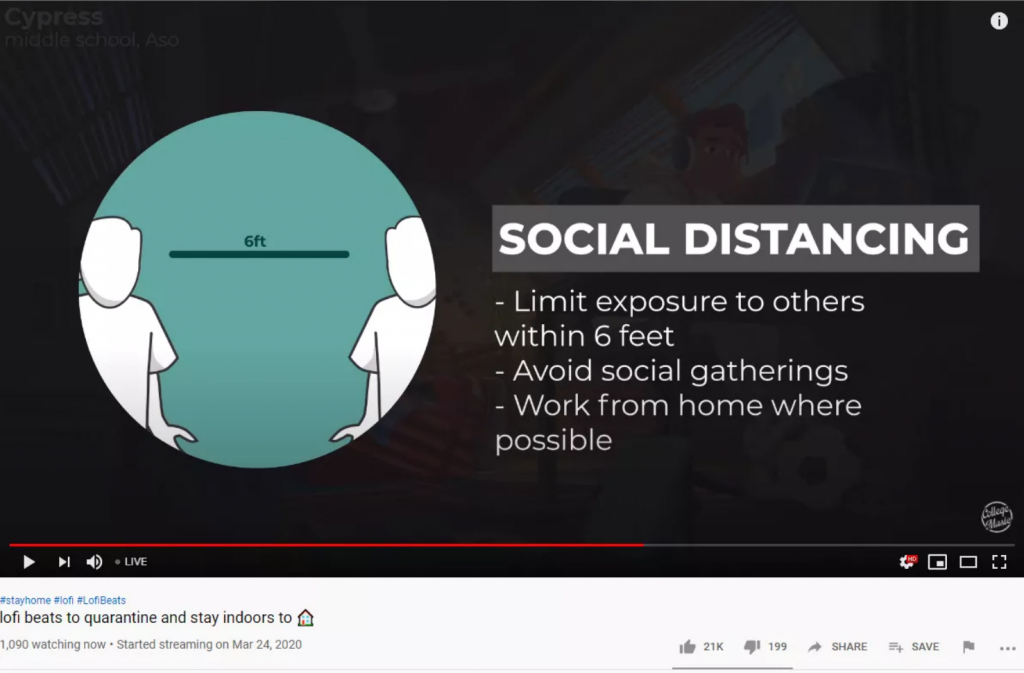 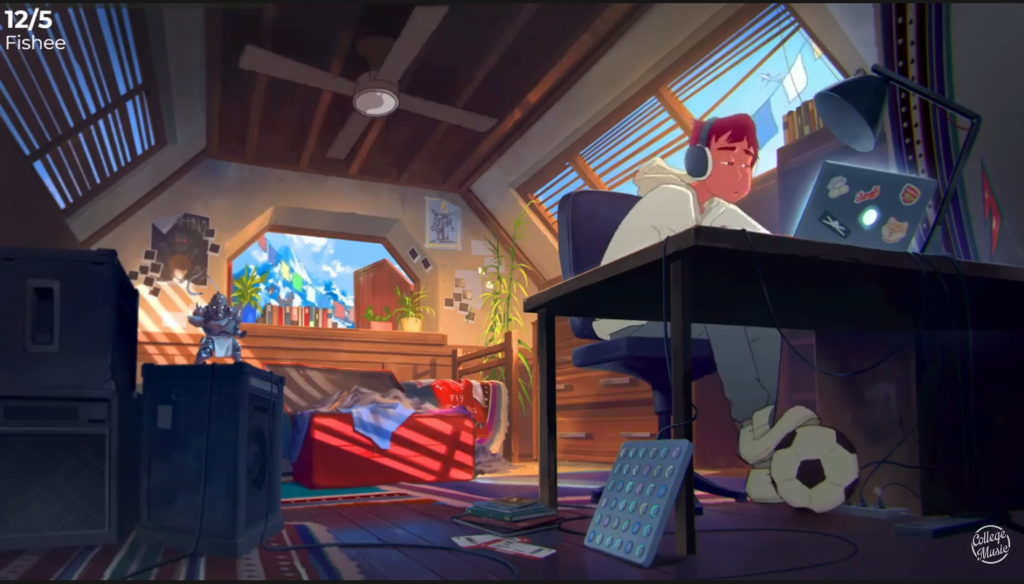 “Without a dedicated workspace, people find it challenging to get into a flow and are easily distracted, especially when surrounded by distractions at home,” Pritchard tells The Verge. “The sudden growth of lofi live streams, in my opinion, is clearly representative of that struggle and people seeking to find means to get back into a productive workflow and really focus on the tasks at hand.”

“Since the pandemic is affecting people around the world, people are chatting with each other around the clock. Whether it’s 3AM or 11PM, there’s always a flurry of activity.” – We’re still living on 24/7 time baby. And don’t you forget it.

In terms of presentation and content, these broadcasts follow more or less the same formula. The streams’ titles are all crafted to be SEO-friendly and make their productivity functions clear (e.g. “lofi hip hop radio – beats to relax/study to” or “vocal lofi hip hop radio – emotional/late night beats for focus”). The songs are short, sample-heavy instrumental vignettes that are typically fewer than 2 minutes each. And while the songs may be brief, their engagement lasts much longer; with ‘the average watch time clocking in at over 50 minutes for some broadcasts.’

People hanging out in lofi beat chats are said to be building communities. College Music promotes a “safe place for anyone to openly discuss these trials and tribulations life has to offer… It’s like a little College Music family”. Join any of the numerous lofi streams and quick observation sees more requests for good pick up lines, admissions of ‘I should be doing homework right now’, an over-dominance of bot comments, or the aforementioned emoji-only purges, than anything resembling deep vulnerability or space for further connection. But that’s a personal reading. 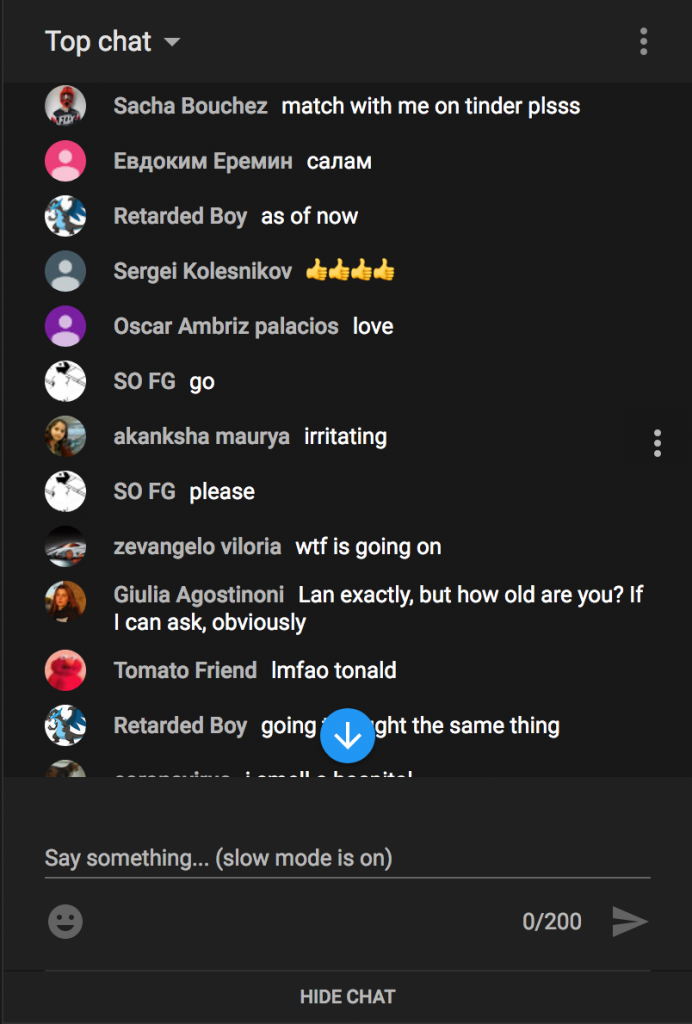 YouTube may be the main lofi wateringhole, but it’s not the major revenue stream for the artists played on them. Those whose music is played, go unpaid. And perhaps most revealing of where we find ourselves financially, the dialogue is that they ‘don’t mind’. A reportage by Hot Pod suggests, “This is partly reflective of lo-fi hip-hop’s persistent DIY ethos, whereby artists and labels are typically happy to forgo revenue and give curation channels a non-exclusive, royalty-free license to stream their music in exchange for exposure to a loyal and engaged community.  (Interestingly, to my knowledge, this approach has not led to any takedowns of livestreams due to copyright infringement claims related to the music itself; all publicly-reported takedowns so far have been due to infringements on visual media, such as Chillhop’s allegedly unauthorized use of a clip from the Japanese film Wolf Children.)” 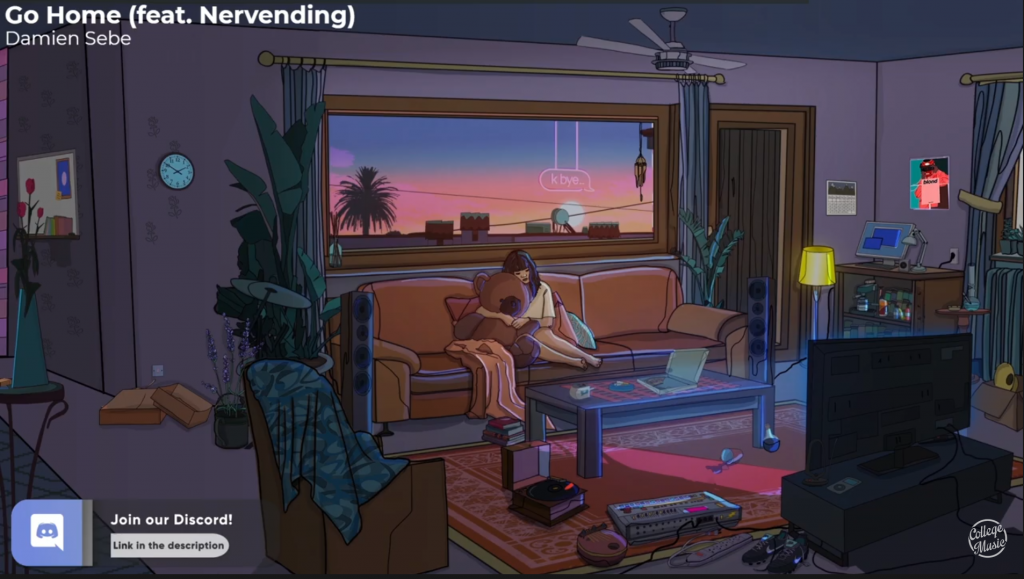 Lofi is not limited to YouTube, however. Tune into any Spotify account and you’ll find popular playlists Lo-Fi Beats and Jazz Vibes are being promoted. The songs are interchangeable, it’s about the stream as a whole. Hence why the financial equivalence for the artist to a playlist’s popularity, are low if even existent. Streaming stats may have inflated, but the artists’ bank accounts remain unaffected. ‘Because the average listener treats a lo-fi hip-hop playlist as background fodder for other activities (like relaxing, sleeping or focusing), actual recognition of, let alone engagement with, individual artists is rare.’

‘In a 2015 press release, Spotify declared itself “obsessed with figuring out how to bring music into every part of your life, wherever you are, whatever you’re doing, whatever your mood.” The idea of purposeful listening—which is to say, merely listening—is becoming increasingly discordant with the way that music is sold to us…

…Maybe the popularity of chill is generational, or linked, in some way, to millennial-burnout culture: always be working or relaxing with vigor! I tried listening to the Chillhop channel again, later on, in my office. It made me feel more agitated than relaxed, as if I were being placed on hold for an indefinite period of time—possibly the rest of my life.’
– Against Chill by Amanda Petrusich

“One popular metric for measuring artist engagement on Spotify is the ratio of followers to monthly listeners, which ideally should fall between 15% and 20% by music-industry standards. Lo-fi hip-hop doesn’t even come close. For instance, Moods, a producer who has released music independently and through the Chillhop Records label, has 1.3 million monthly listeners on Spotify but only around 29,000 followers — a conversion rate of 2.2%. Similarly, Brenky, a producer who released nine lo-fi hip-hop albums over the last three years, has 1.2 million monthly listeners but only around 4,000 followers — a conversion rate of just 0.3%.” (via Hot Pod) Incredibly low loyalty. After all, who is checking the particular artist that comes onto the speakers when you’re tuned into one long, neverending loop?

In other words, such producers are getting massive reach, but close to zero follow-up from fans. As Luke Pritchard of College Music, tells: “If you take a traditional hip-hop artist and a lo-fi artist who both have tens of millions of streams, the former could maybe sell out a tour, but the latter would likely struggle to sell 10 tickets.”

Lofi beats appear as another exploitative ecosystem, full of passive players who feel powerless to the point of resign. Leading label Chillhop even has plans to open its own lo-fi hip-hop cafe this year, with an accompanying podcast. “We want to tell deeper storylines, and to showcase a culture and a lifestyle,” says founder CEO Bas van Leeuwen. Wait and watch the old school commodification model of a potential ‘subculture’ ensue.

If you’re trying to cyberflâneur yourself into a new aural street and find yourself at a lofi beats drive-in, you’ve arrived right where the market wants you. Where the visuals are so familiar, you could have stayed home. And the music so unaffecting and deliberately apathetic, it’s virtually inaudible.