Pausing for thought with Scott Wark and Tom Sutherland

END_OF_DOCUMENT_TOKEN_TO_BE_REPLACED

An interview with Geert Lovink for Lange Nacht Festival.

This past Saturday the Band of Burnouts research lab presented We Are Not Sick at Zurich’s annual contemporary music festival Lange Nacht. As part of the presentation, an accompanying publication was available onsite for guests including an interview with one-half of the We Are Not Sick duo, Geert Lovink. END_OF_DOCUMENT_TOKEN_TO_BE_REPLACED

An interview with long-time Outsider supporters MAEKAN about my new book Offline Matters. 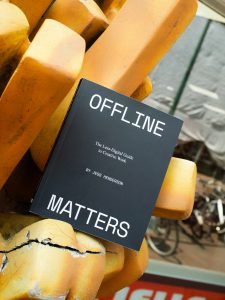 When did creative work become so boring? When did ‘digital-first’ come to dominate everything? …and why is nobody talking about it?

“In reading Offline Matters I saw the thoughts I don’t give myself time to think articulated precisely in black and white. Here in front of me were the contents of the inner monologue that runs through the background of my professional life as a designer, writer, and strategist. But this book is much better than anyone’s stream of consciousness, because the author, Jess Henderson, spells out with clarity and conviction the reasons behind those perpetual nagging sensations of dissatisfaction, boredom, and incredulity that is doing creative work for money.
END_OF_DOCUMENT_TOKEN_TO_BE_REPLACED

This is the second part of an interview on serial media with Ryan Engley, Professor of Media Studies at Pomona College and one-half of the ‘Why Theory’ podcast.

In Part One we talked about the basics of seriality and Serial Theory, its connections to psychoanalysis, the centrality of  ‘the gap’, and how streamed TV and binge watching fits into all this. This week we continue on the topic of serial media, discussing seriality in journalism, the wildly successful podcast ‘Serial’, and the mislead general sentiments towards Netflix’s algorithms and offerings.

END_OF_DOCUMENT_TOKEN_TO_BE_REPLACED

With Ryan Engley. Professor of Media Studies at Pomona College, and one-half of the ‘Why Theory’ podcast.

To listen to the Why Theory podcast is to sit in a room with a warm professor-student-turned-friendship duo. With a palpable tone of fondness and special ability to translate complex concepts into understandable hour-long thought-snacks, Ryan Engely and his former professor Todd McGowen ‘bring together continental philosophy and psychoanalytic theory together to examine cultural phenomena.’ If you haven’t listened to Why Theory already, give it a go. It’s a blast.

END_OF_DOCUMENT_TOKEN_TO_BE_REPLACED

How many of us have toiled painfully at the task of writing a bio? To condense ourselves into a paragraph, let a lone a sentence, is a resounding task of discomfort. What’s key? What’s irrelevant? What’s interesting (as interesting to others as it is, or is not, to ourselves)? Essentially, how to say more with less?

END_OF_DOCUMENT_TOKEN_TO_BE_REPLACED

Our view of the US at present is obscured by the news, from our position in Europe. Here are dispatches from across the city of Los Angeles, reporting from life on the ground as the skies clear and the initial panic-dust settles. For now.

END_OF_DOCUMENT_TOKEN_TO_BE_REPLACED

Cameron Foden is Senior Denim Designer at Calvin Klein. We spoke on the developments of his job and noticable impacts on the fashion industry so far, under the circumstances of COVID-19.

(Cameron, pictured right) So, fashion. Obviously this is going to be very, very interesting. How all aspects; so a) consumerism as a whole, and b) fashion itself, will be effected. The luxury goods industry is going to be devastated, especially as people re-evaluate their priorities and their spending. With so much uncertainty people are going to have a complete change in their spending habits. I don’t think we can even begin to comprehend yet what it’s going to look like. Some people are saying we are looking at half a year (for recovery), other people are saying we are looking at up to two. Let’s see where we end up be next week, or next month. I suspect prospects are only going to look more and more grim.

END_OF_DOCUMENT_TOKEN_TO_BE_REPLACED

Last time we spoke with Dalia, she had returned to her home city of Naples, Italy, after being fired from her job in Berlin. This week we checked in with her to see how she is going and hear more about her life in quarantine.

Have you heard what is happening in Berlin? It’s crazy. It’s super nice. Super ‘solidarity’. The senate finally unblocked I don’t know how many euro’s right now that will be distributed amongst unemployed freelancers. But there is not any discrimination. You just fill in the document, the application, and then you get this money. The point is that because it is so open and it is going to be so easy to get it, they have organised this online queuing, to a platform or whatever. The whole population of Berlin is basically in line in this queue, so 150,000 people, and we are waiting since days now. Watching our laptops. The server crashes sometimes because, of course, so many people are watching. I’m around number 20,000 *laughs*.

(Ruth, pictured left) Wow, you’re kind of near the top!

Definitely. My friends and I were helping each other to scout for some kind of funds, so I was probably one of the first to know about it. Everybody is asking each other ‘which number are you?’ ‘Number 31,560!’ *laughs*