At a first glance, the content of selfies seems to harmlessly range from duck faces to sexual flirtations. However, the all-encompassing nature and cross-class scale of this phenomenon mean that it is impactful beyond the suggestion of its whimsical exterior. The ubiquity and uncritical use of selfies mean that they potentially pose a serious threat, which is the topic of the following infographic. 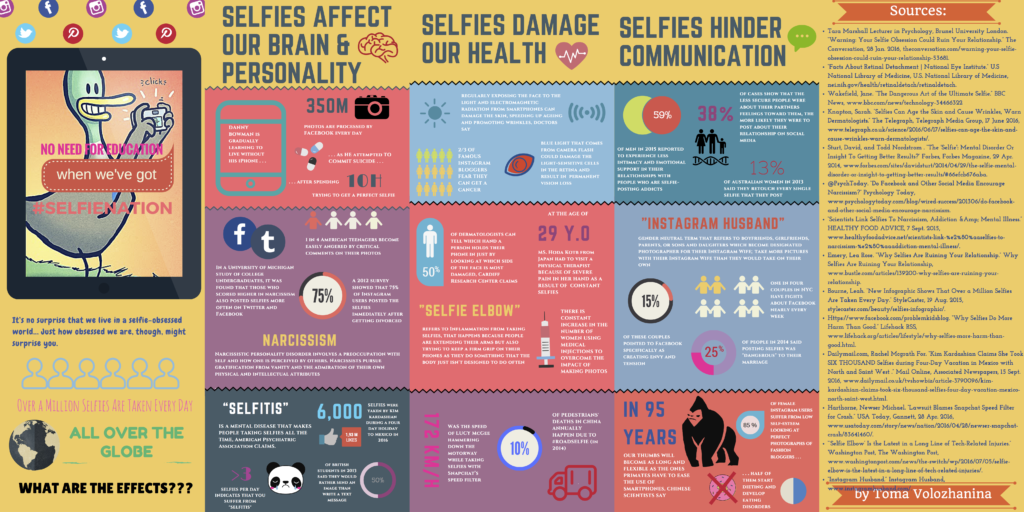 With this infographic I aim to unveil various negative effects that may result from selfie addiction. Millions of social media users all over the globe post selfies on a regular basis, all the while having no idea of the potentially dangerous effects. In the infographic, I cover three major consequences of the ‘Selfie Nation’. The first page reveals how selfies induce degradation of people’s brain and personal character by changing the way they think and absorb information: as a result of massive use of photos and images to convey emotions and messages many teenagers have lost the skills of grasping the meaning conveyed by texts; those who post their photos all day long start can being preoccupied with themselves and how they are perceived by others, eventually becoming egocentric and narcissistic; many individuals who photograph themselves too often view it as a goal of their life.

The second page explains that selfies may pose a serious threat to human health as electromagnetic radiation and the blue light that come from smartphones accelerate ageing, contribute to the appearance of wrinkles and may even lead to a permanent loss of vision. Extending one’s arms in an unnatural manner while taking selfies can generate severe pain and inflammation in the elbows. Additionally, people often take selfies in places where they are expected to be careful and attentive such as roads or when being engaged in high-risk activities that require a remarkable level of concentration to stay safe such as motorcycling while selfies distract them, often causing severe injuries or in some cases even death.

The third page highlights how selfies hinder communication. Selfies affect people’s appearance by reinforcing beauty stereotypes and making media users feel depressed and unsatisfied with what they see in the mirror. Selfies ruin relationships and friendships as those who are close to selfies addicts suffer from lack of emotional ties and physical attention since their loved ones devote all their time and effort to making a better photograph.

The crucial take-away message of my infographic is that the universal worshiping of the perfect selfie has come too far. It is not only threatening our physical and mental health, but is dramatically altering numerous parts of our lives. My infographic depicts how people’s obsession with being praised and admired for their visual appearance not only increases self-centeredness but holds strong power over the lives of individuals.

My name is Tamara Volozhanina, and I study International Affairs and Communications at John Cabot University in Rome. Traveling is my great passion, second only to my love of writing. A combination of these things is something that makes every day worth living. A famous Russian social activist Sergei Guriev once said that the new autocrats confirm their rule using “propaganda, censorship and other information-based tricks” rather than terror or repression. I want to oppose them professionally by honestly working with information. The principles of democracy, liberty, equality and brotherhood must be protected every day, and it is journalists who are situated at the forefront of this action holding the greatest responsibility.  I am Russian, and I am proud of my country, its great culture and glorious history. However, I think that Russia’s way of development should be based on European values of liberty, enlightenment and non-aggression and that only the spoken Word and Diplomacy rather than the ratting sabres can save the world. I believe in the peaceful future of my country and wish to work hard in this direction as a professional political journalist.