Ana Peraica’s presentation focused on the selfie and self-images in regard to the places their recorded in. She approaches the selfie as a way to report the world behind ones back. 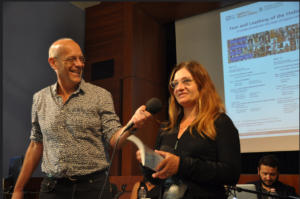 Ana starts her keynote with a personal story of her grandfather who recorded dozens of selfies during war time for self-storing, as a way to present himself as ‘being there’, a survivor, surrounded by bombings, battles and death. Nowadays, death is one of the most radical and perpetual transgressions in the contemporary culture of the selfie. One interesting case is Breanna Mitchell’s selfie, recorded at Nazi Camp Auschwitz, that fell into the hands of the media and went viral. After this controversial selfie, many selfies at places of commemoration and death followed.

Death in selfies is not particularly something new to our visual culture. Selfies and portraits with corpses were also common in the 19th century, where children often died before pictures were taken. Indeed, corpses were preferred objects to photograph because of the long exposure time that was needed. Still today there are different traditions of the representation of death and transgression of traditional Western morality and related social habits, such as ceremonies, condolences and mourning, that are enforced by contemporary media trivializations of death. Photographs in media reports are the dominant broadcasters of the discourse of death, that commonly hide identifiers of the deceased to avoid possible charges of necrophilia. Though they can still be blamed for desecration and utilization of dead. News media report the world behind the back in a way that loses the capacity to scare, as some kind of detainment of reality, and maybe we could even say it is photography that invented the discourse of death full.

Contrary to 19th century representations of the death, in which it is not always clear if the person is dead or alive, contemporary selfies enlarge the difference at both real and symbolic levels. The 19th century selfies showed a certain poïesis of mourning, with a close relationship to the deceased, while contemporary selfies indicate a sadomasochistic relationship towards the body of the other, not being able to self-defend. In most cases, there is hardly any inner relationship visible to the corpses in the photograph, devoid of physical touch or emotional reactions. In this sense references to death in photographic theory in unavoidable. The effect of mortuary in photography elaborated by Walter Benjamin, recognizing the rigor mortis, the stiffness of body muscles appearing within the first hours since passing and lasting for four days, a long-lasting effect of photography. He defined photographic practice as neither artistic, nor forensic. André Bazin introduced a metaphor of the photograph as the death mask of reality to describe the whole effect of technology that was later elaborated by Susan Sontag in the idea of the mummified effect of the medium.

What changed in self-portraits since the Renaissance is the development of perspective and centering of self in visual culture, from the self in the mirror to a mirrored self-image. Before painters where showing the world in front of themselves, with a mirror included inside. For example in the painting of the Arnolfini Couple of Jan van Eyck, a late Medieval painting in which two definitions of space collapse. How do we anticipate the position of the viewer? 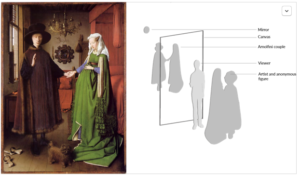 The contemporary selfies represent mirrored self-images. This paradigm shift is related to use of mirrors en lenses. Selfies today show the world behind our backs, because there is a mirroring technology included. This world behind the back is a mirrored world that works precisely as in the Myth of Perseus, who had to kill the gorgon Medusa, the only mortal gorgon whose eyes could turn you into stone. Perseus murdered Medusa with a sword and mirrored, polished shield. In this way he could control reality by using the reflected reality, and this way he was able to master the ‘real’ reality. This is similar how we can see the relation between real and virtual bodies nowadays. The reality itself became something alienate to the perception of the self and is somehow reported as the world behind the back.