Maintenance Pornography is part of an in-progress research that looks into amateur sexcams, particularly the American website chaturbate.com, and explores domestic life in the context of Platform Capitalism. Through a performative installation, this project asks about the role of habits and maintenance practices in the incorporation of new economic and technological infrastructures. It is, at the same time, an affective exploration of an speculated, yet inhabited, networked domesticity: the domesticity of the online self. 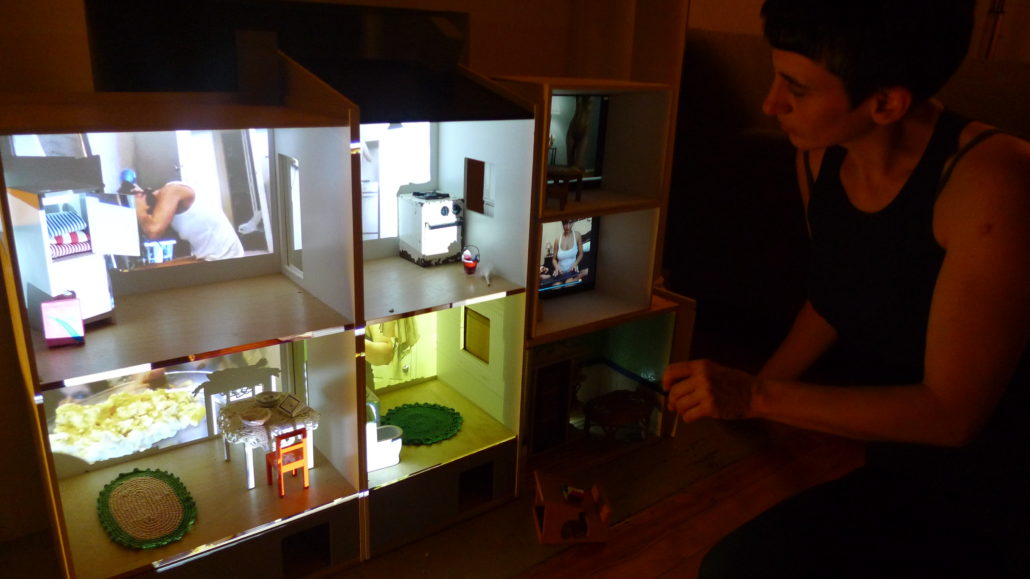 Chroniclove puts some oil on a frying pan, opens a cupboard and grabs a plastic bag. She puts two slices of bread on the pan and shows her feet to the camera while ties the bag, because one of the 1120 people connected through the chat asked what kind of shoes she was wearing. She returns the bag to the cupboard and cuts something on a wooden board. She shows it to the camera: a tomato. Someone writes to her: ‘you still have that scar from the pizza pan incident’.

Chroniclove is one of the approximately 3500 performers broadcasting live, at this moment, in the popular American website Chaturbate. There, thumbnails of people arranged in a panoptic grid welcome everyone claiming to be 18 or older. There is no payment required to create a channel (just a verification of age), no necessary fee to click on one of those thumbnails and watch people (categorized under male, female, couples and trans) perform sexual acts on camera, streaming presumably from their own room/house in a one-to-many broadcasting model. The video broadcast is accompanied by a chat where the audience write comments and demands to the performers. Requests, however, are not usually heard if they are not accompanied by money. Sometimes performers set prices and corresponding sexual rewards, and the public collaborate to reach those goals, tacitly crowdfunding sexwork together. The site will keep half of that money. Because the homepage of the site features the most popular sexcams currently being watched, Chaturbate seems to never stop, never sleep, never disconnect. ‘An illuminated 24/7 world without shadows’ (Crary, 2013, p.9). There is always someone in a different timezone, naked and working. The capitalist dream of an always lubricated machine in an endless update: always changing but remaining the same.

Although the declared purpose of Chaturbate is to provide a constant source of live pornographic content (‘the act of masturbating while chatting online’ is their anthem), there is more than pornographic content displayed here. Sometimes performers are just waiting for a bigger audience. Sometimes they have just finished their act and are no longer concerned about the camera. Popular performers, such as Chroniclove, can do non-sexual acts and still receive tips and comments through the chat. In those occasions, there is an opportunity to see sexual performers in plain domestic activities–generally in their underwear–such as preparing tea, doing the dishes, playing video games or cooking. However, domesticity not only arises in non-sexual moments: the setting in which performers broadcast is homogeneously a domestic environment: generally a bedroom, at times a kitchen, sporadically a bathroom. In these sexcams, domesticity is always emerging, always already there. Chaturbate is the roommate-based version of the Playboy Mansion, a place with no distinction between work and leisure, yet always producing. Making distinctions even more complicated, a popular behaviour among performers is (or used to be, as it will be discussed) doing domestic chores while using a sex-toy that vibrates at the digital sound of coins each time they receive money through the chat. Chaturbate offers a glimpse into a networked domesticity: collaterally shared by people unknown to one another, produced by media, nurturing a capitalistic machine, entangled with the platform that enables it.

Every room exhibited on Chaturbate can be considered as part of a larger network formed by the broadcasters, the audience, and the platform that connects them. The only stable, non-interchangeable element is the latter. Viewers and broadcasters are fragmentary and temporal, and leave only a semi-permanent trace as a log on the server. And yet, at the same time someone is sharing their privacy with thousands of strangers; someone is watching a performer’s room from their own, switching from chat to chat. Still, attention on the site is not unidirectional, and performers continuously acknowledge money and requests from hundreds of viewers they cannot see but read through the chat window, where usernames are colour coded according to the amount they spend on the site. Viewers (that tip) may request something reminiscent of a lover’s attention: being named, remembered, some of that nonsense talk that relationships are built on. Although the performers and their audiences are human, the interaction between them is not only mediated by software but is arguably its product, a construct that cannot exist in the offline world. Sexcams present a clash between humans and software and, at the same time, a glimpse of a common ground.

While more explicit–and shiny, polished, professional–content available elsewhere, millions of daily visits seem to exceed a pornographic quest, at least in the common sense. Understand it under a voyeuristic rubric seems to be a fetishistic move: a mistake that nobody cares to fix.

Rather, as expressed by the audience, the possibility of interaction, realness and intimacy seem to play an important role. This intimacy is not just produced by real-time interactions but requires also intensive labour from the performers, expressed in attention, care and presence in social media beyond the scope of the spectacle (although the meaning of spectacle is debatable here). It is, in a sense, about affective labor, but more–paraphrasing Patricia T. Clough–about the labouring of affect.

This labouring of affect, then, does not only involve creative and spectacular practices (but again: spectacle) but maintenance ones. Here I am borrowing Mierle Ukeles’ call for the recognition of maintenance practices, that repetitive and prosaic work that sustains development, the work that ‘allows for all other work’, what incorporates infrastructure into daily life while shows its fragility and necessity of care. As Wendy Chun affirms, new media matters the most when it seems to not matter at all, when it passes from disruption to habitual.

Maintenance Pornography explores those moments of maintenance in sexcams. Those boring, repetitive actions, invisibilized at the light of creative ones, yet at the core of every activity. It does so through a performative installation that asks about the thresholds among maintenance and creative practices, housework and sexwork, work and leisure in the sexcams snared in a digital platform, and in the role of spectacle in those transitions. More than fixed categories, housework and sexwork are seen here as polarities of labor within the domestic context–context that has its own genealogy in relation with paid and unpaid practices. The dollhouse is in this project a figure and a medium or interface. It allows me to inhabit spaces with the performers and share the maintenance practices that sustain this networked domesticity, where the network is a transactional reality, fictional yet inhabited by bodies, data, instances of software, venture capital, with multiple occasions of encounters and shared habits.

The house is past, though.

Antonia Hernández is a Chilean Montréal-based visual artist and PhD candidate in Communication at Concordia University, Canada. Mixing media practice and theoretical research, her interests involve the domestic side of digital networks, maintenance practices and the laboring of affect.