Olga Goriunova describes that self hood and truth are linked by a distance, in which the factual and the fictional are re-arranged. The face become material for algorithmic analysis, that forms the debate of indexical truth and algorithmic objectivity. Fabio Cristiano and Emilio Distretti discussed the space and movement in location-based video game Pokémon Go, in occupied East-Jerusalem, as objects of conflicting narratives.

Olga Goriunova: From selfies to biometrics: Face and Authenticity in the Truth Practices of Data. 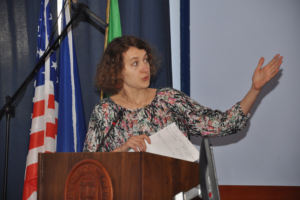 Olga Goriunova started her keynote by discussing the face that was seen as something authentic, a mark of presence and some degree of openness. The authenticity that is promised is based on something real, it is the truth about our being. In the recent years it even became more as such, because we created an online presence of the self. Faces are authentic both as a key to visual expression of emotion and as active documents that ensure the pictures are of real, unique people. Nowadays the notion of authenticity, presence and selfhood are re-defined as they are computationally produced and sustained. Selfies offer a specific authenticity. Although it is a make belief one, because images are edited with filters and apps, selfies are still real faces to that effects the authentic in their  technical and cultural fiction. Because we embraced these filters in our online presence a certain compulsively authentic emerges, that is distant from the true self. In this way the self and the truth are linked by a distance, in which the factual and the fictional are re-arranged as modes of operation of authenticity and presence.

Faces operating in the liking economy, are captured by cameras and turned into data. Facial recognition technologies and algorithmic transformations ensure the face meets the required norms of beauty and is formatted for data insights. In this sense our social media presence becomes a index of truth and authentic identity enables a society of control, where identification practices are enforced. The computational face becomes the new fingerprint and the face acts as apparatus of capture. Identity in this case is not a form of ontological authenticity but it is a technical process, that works with predefined data samples that generated biometric templates.

Olga showed a screenshot of Face Cages of Zach Blas. These are biometric diagrams of faces, which are fabricated as three-dimensional metal objects. Data analytics require objectivity and indexicality, but selfies are based on emotional truth. But what does it mean if the emotional truth of feelings is extended by computational practices? Biometric machines often fail to recognize minoritarian persons, which makes these machines vulnerable to discrimination and violence. Facial recognition technologies fail to detect dark skin, gender and age, and show that the calculations by these technologies are superficial and harmful. Identity is not located within a person but it is a process that links biologically unique to computationally discrete. The features need to be universal and permanent, based upon frequency of occurrence. The truth of data is intertwined with the truth of subjectivity and identification is by no means a neutral or transparent process.

Fabio Cristiano & Emilio Distretti: Along the lines of the occupation: playing at diminished realty in east Jerusalem 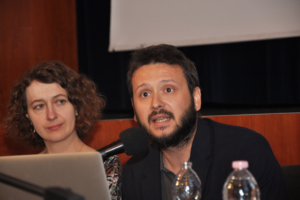 Fabio Cristiano and Emilio Distretti analyzed the ways in which Pokémon Go’s virtual representation of Jerusalem legitimizes a status quo of separation and segregation. Instead of enabling an experience of augmented reality for the users, the game produces a diminished one, that is overriding the controversial occupation of East-Jerusalem.

Augmented reality technologies that are used for gaming purposes enable playable experiences at the intersection of real and virtual worlds, but in the context of disrupted areas, overlaying a virtual world remains a problematic endeavor because they depend on how actual layers are transformed into virtual spaces and settings. In the context of Palestine and Israel, space remains an object of concern and the medium through which military, civil and judicial powers operate. Spaces, politics and narratives in the AR are often in contrast to the complexities in the actual world, framed in their own realities. The Palestinians in the Gaza emphasized the difficulties of playing because of poor mobile data and limited mobility in occupied territory. On the other hand Israeli soldiers posted pictures on social media associating Pokémon with terrorists.
Besides these conflicting narratives PG also produces its own VR representation of the city, resulting in a set of lines that players need to walk in order to catch Pokémons. These lines retrace actual streets, without recognizing a divided city. As playing PG requires actual walking onto the AR map, Fabio and Emilio took a dérive, playing the game to understand how AR reproduces the complex realities of segregation in East Jerusalem. Their walks went along and through the 1949 Armistice Line, which marked the border of Israel until the 1967 War, with the intention to engage with the performativity of a border that, has been made invisible by Israeli authorities, policies and mainstream narratives. Their aim was to reveal the infrastructural grid produced by the intersection between the VR and the real in AR technologies, by focusing on three elements of the game:

Traditionally walking has served as an instrument for conflicting narrative in Jerusalem. On the one hand it served to forge the sense of Jewish proprietorship over the land, while for Palestinians it remains a method for engaging with vanished landscape. Besides connecting people to their places it also possesses a disruptive potential: the potential of challenging the spatial order of cities, while creating alternative urban experiences. Walking as the practice that breaks prefixed trajectories and creates meaning by disrupting the linearity of life and space. In Jerusalem a complex network of lines created uneven geographies, materialized in the form of borders, boundaries and infrastructures creating regimes of mobility. On the west side of the Armistice Line PokéStops brightens the map on different types of landmarks, while on the east side only a few PokéStops depict a desert-like East Jerusalem, erasing the segregating lines of the city. These lines pose multiple geometrical and geopolitical questions regarding the city, about the length and thickness and visible and invisible lines. These lines are not exclusively point to point connectors neutralized walking but function as geometrical dimension of tools of partition. While PG is maintaining the invisibility of the Armistice Line, the game adds a layer of VR which completes the malleability that characterize those elastic grids of military and civilian infrastructures of separation already existing in physical Jerusalem.