Rebecca Stein talked about how social media became militarized in the Israeli military occupation of Palestinian territories and Jillet Sara Sam discusses the empowerment in the digital political field, influenced by the digital-self-as-citizens in the #selfiewithdaugther campaign.

Rebecca Stein: The Militarized Selfie and its Other: Israel’s Occupation in the Smartphone Age

Rebecca Stein discussed the rise of Israeli digital militarism – the interplay between social medial en militarist politics – arguing that social media functioned as a crucial theater in which the technology supported and advanced the Israeli military occupation. In November 2012, Israeli soldiers went into service with their smartphones in there pockets, sharing fashion and duck face selfies and the ordinary military life via their personal Instagram accounts, while waiting for their deployment. The variety of posted selfies Rebecca showed were uploaded with hashtags that gestured towards violence: #sabaton #primovictoria #israel #idf #warrior #kill #colt #m16 #tweegram #instalove #sexy #bomb #rockstar #fire #5.56 #nevergiveup #sleaze #instagood #happy #sleep. These digital platforms and the standard catalogue selfie-portraiture these soldiers practiced, became militarized tools in both military operations and in civilian frameworks. These snapshot produced a rich visual archive of soldiering, offering a digital twist on the long history of Israeli nationalist iconography. Global media reported about Israeli’s ‘first social media war’, as many military spokesmen adopted social media as political tools to personalize the military campaign, contrasting with the output of the Palestinian residents of Gaza, who reported about the unfolding of the Israeli military devastation. Two different archives arose – of the Israeli’s digital militarism with ‘violence in the hashtag domain’ and a testimonial archive by the Palestinians of Israeli violence.

Rebecca outlined her research within a broader investigation of fake news rhetoric, showing viral videos of the killing of 12 year old Mohammed al-Durrah, and the killing of Nadim Nawarah, claimed by Israeli amateur forensics to be manipulated. The 12 year old boy wasn’t killed at all and the broad agreement of the video of Nadim Nawarah was that it was falsified, it was a hoax. These viral images deemed them dangerous in the extreme. Their danger was managed with the “Pallywood” narrative, with the idea that Palestinians are strategically playing dead in front of the camera in order to realize public relation victories. The narrative of the Palestinian lie became an important means of managing the violence against Palestinians and social networks became an indispensable instrument of warfare.

Rebecca concluded that we have to think more critically about the ways that Israeli power works in digital militarism and how the occupation is sustained through social media practices. By reading these images as an archive, the material may offer political alternatives, as a important political counterweight to the Israeli legacies of forgetting and erasing.

Jillet Sara Sam: Gendered habitus and the digital self as citizen in indias #selfiewithdaugther campaign 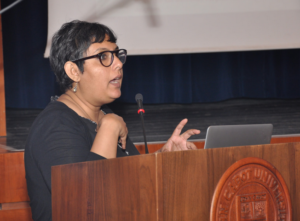 Jillet starts her keynote with the idea of the selfie as a means of empowerment vs control. On the one hand the selfie is celebrated as a sensation of empowerment and a mode of self-presentation, communication, political messaging and artistic expression. On the other hand the selfie is criticized because it practice leads to narcissism. Jillet mentioned the empowerment paradox of Kedzior. She argues that the idea of empowerment descended from the simple fact that the selfie is another way an individual can express oneself. In this sense, selfies are, as photographic genre, a democratic languages of expression, capable of expressing socio-cultural events. However there is a danger in the selfie too, while identities can become diminished by overrepresentation, as we are encouraged to create infinite versions of ourselves. The selfie becomes a medium for augmenting the self for presentation and evaluation by others. The individual becomes an exhibit, an object of contempt or admiration. This underlines the idea of disempowerment, caused by vulnerability.

Jillet showed images from the #selfiewithdaugther campaign in India, started in June 2015. Prime Minister Narendra Modi launched a campaign asking people to share selfies with their daughters on social media. The campaign was aimed at creating awareness about and curbing female foeticide that is rampant in several parts of India. But, Jillet argued ‘this campaign is actually used for larger political agendas. The Prime minister borrowed to idea of the selfie from the head of a small village, that is actually battling to raise the status of Indian women and to change old patriarchal mindsets. But how can a Prime minister carry out such a massage, if there is no crackdown on abuse against women?

The #selfiewithdaugther campaign is what India should be, but what is really at stake here in these kind of campaigns? Kavita Krishnan argues that the campaign proves hollow: ‘What really is the point of a public display of pride in your daughter if you find it acceptable to shower sexist abuse on women whom you disagree with?’ What is it all worth after the prime minister publicly offended the female writer on twitter? Why not actually empowering women in India? Why can only fathers post pics, why not the daughters themselves? The question that really matter is how to proceed with empowerment of women?

Jillet concluded her presentation by stating that the empowerment in the digital political field is influenced by the digital self-as-citizen. This in turn is limited both by gendered habitus and the struggles between heterodoxy an orthodoxy around gender norms.