This article will be a review of some experiments done with Twitter in the making of a book. First of all, I have to point out that both for the internet and for the book it is about words, as simple as it can be. 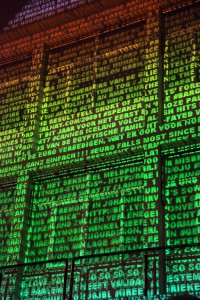 Writing a text has always been putting words together one by one, but is it actually like this? How does the process of setting up a concept come to get into a line of words? This had already become a little different in  writing on computer. Recently for an exam I was asked to write an essay, in the strictest sense of the word, so I mean with a pen on a sheet of paper. First I thought that was crazy but actually it has been quite an interesting experience, which made me  see how my mind works in composing a text. Probably none of us starts writing a text putting one word after another, as the first action is usually put down some quick notes, basically words, and in the meanwhile drawing all the connections, picturing the network. If we go some steps beyond and we focus on the concept of words as indices, in this perspective, how could a book be conceived differently?

On the internet we do our research using words, and all the other ways of organizing, connecting, describing the content is basically semantically done (tags, hyperlinks, metadata, etc.), even with images: we describe an image in words, both in  processing language (with the code) and both in a wider sense, as the textuality of an image, which can be intrinsic, due to the context, and extrinsic, if the image is directly related to a text. In both the cases, words change the sense of an image.

Coming back to books, we have a series of words ordered in a storyline, which was supposed to be a line (pages, numbers of pages etc.) but it’s actually not just a line anymore. This is more about the physical space of a book than in a temporal sense, which is not of course a new thing, thinking for example about the storyline of a novel. That’s why we say that the book is now unbound, but of course we need to find other ways to order these words, because that’s what creates the meaning, as it has always been.

In the rethinking of this organization in the writing/reading experience, it’s inevitable to look at the internet and how  it works. We are already used to and also very skilled to have an experience of its content in a fluid way, so why not do the same in a book? One thing that could seem such a futuristic way, I think rather should be considered as something more like a “degree zero”. The first step could be trying to carry out experiments using the internet as a source of words.

Experiments such the re-use of the internet content better show how this is a fast-changing and, by definition, interconnected realm. If we focus on words we can look at how they work on Twitter. Hashtags create sort of “hot spots” from which a network of connections (between users, between other hashtags etc.) grows.
Hashtags could be seen as topics of a book, and this concept makes the structure work  backwards, too: for example, tracking an entire book with hashtags that defines the topics in it or creating a flow of tweets from a book.
Therefore, this is just a different kind of index and we definitely have to learn how to move through new forms of indices, to create new books.

“Hashtags are mostly used as unmoderated ad-hoc discussion forums; any combination of characters led by a hash sign is a hashtag, and any hashtag, if promoted by enough individuals, can “trend” and attract more individual users to discussion using the hashtag. On Twitter, when a hashtag becomes extremely popular, it will appear in the ‘Trending Topics’ area of a user’s homepage. The trending topics can be organized by geographic area or by all of Twitter. Hashtags are neither registered nor controlled by any one user or group of users, and neither can they be “retired” from public usage, meaning that hashtags can be used in theoretical perpetuity depending upon the longevity of the word or set of characters in a written language. They also do not contain any set definitions, meaning that a single hashtag can be used for any number of purposes as espoused by those who make use of them.” (Wikipedia)

We already have several studies in the field of sociology of twitter: both the research on twitter and both the use of twitter as a research tool. One of the quirks of twitter is that it works as realtime research on data and process which is always in progress.
Some of these studies focus on which universe of meaning the users connect to a certain topic spontaneously and the further step is usually a co-word analysis to finally visualize the entire network.
This is also relevant in the field of textual studies, since we can easily notice that a flow of twits is not so far from a book, just thinking about it in a extended perspective.

In my recent research I have found some interesting editorial projects “twitterly-generated”.
U10 (Udieci) is a small and young ebook publishing company based in Milan. In the last year they have done several editorial projects called Twitterbooks, collections of streams of tweets about different pop topics, then put into an ebook format.
D-Crit #platform was born as summer workshop organized by Neil Donnely and Mimi Zeiger for the Design Criticism Department in SVA of New York. The students were asked to choose an alternative platform for their training in design criticism. The platform selected was twitter and #platform was developed as an algorithm which combined in a unique structure 4 different topics, besides the location and the time ratio. Two weeks of collective experiences, conversations, and relationships were afterwards distilled from more than 1000 tweets, giving voice to the collective experience of the program. The ending output was a series of realtime generated volumes in which the font, the background and the color of paper changed as the variables were recombined.

There are some statements about the ‘twitter-like’ book that raise new questions.
Of course it has to be seen in a more fluid way, so why stop this word stream in a book layout?
Last week I had an interview (soon upcoming) with Dimitri Nieuwenhuizen, CEO of Lust design studio from The Hague, who showed me some very interesting experiments based on the twitter stream of words. The aim of these projects was to try not to close the book in a time-frame, as the words that composed the content, twittered words, were always changing in time. This is a good example of a totally different way to conceive a book, which goes far beyond the ePub/Pdf format ebook as we know it up to today now.

The further step could then be that this concept of book has to be seen as well in a more open sense and as an open content container, so why “close” it into an object?
Maybe we should look at the several collective editorial projects on the web as a new area to experiment in the narrative of making stories but also as a visual challenge.
Even if it doesn’t take on the appearance of a book as we know it, the internet is itself a “book”.
What is the limit that define the concept of a book? Does this limit still make sense? What kind of content will we have on it? How to have  control over it now that we have maybe crossed some of these limits?

The assembly of #platform, a new publication by students of the D-Crit Design Writing and Research Summer Intensive, Mimi Zeiger and Neil Donnelly