Occult computing for artists: an introduction.

Recently I was commissioned by un Magazine projects to write a paper for their eight point two issue. The launch is early december I will add a link when it is available electronically. Here is a breif abstract:

Occult computing for artists: an introduction

The text A Guest + A Host = A Ghost once appeared in black print on a green wrapper around a candy given out by Duchamp at an exhibition. This artwork is considered as a point of departure because of its timely connection to theurgical performance and occult computing. This piece of writing does not travel the well-traversed boulevard that Duchamp once paved, nor does it further explore his relationships to Dada, Surrealism and Situationism, whose activities irrefutably stamped them into the canon of twentieth-century autonomous art (in which its institutions and artists still avidly dredge).

It comes in a wave of great relief that we cannot predict every instance, nor control the production and reception of every variable in the sending of a code nor in the multitude of ways (possible) communication is received and may flow. But the alarming ability of people and organizations to misappropriate and recolonise wild configurations and marvelous tactics, condensing them into a homogenous version for easy digestion, is not to be overlooked. An analogy of a blue and white Nivea container comes to mind, its vast smothering thick viscera spreads over continents persuading the local people to forget their own balm. In this genealogy the act of creating is defined, like most things in the twentieth-first century, by acts of consumption.

A change of tack, the artwork from which this text transcends epitomizes the notion of a code and cypher key and thus gives insight into the arcane and ubiquitous nature of central technologies existing among us (and their cultural, political and occult substructures). Precisely relating to the manifold of time in which we exist, this small monograph, albeit briefly, both critiques and draws parallels between contemporary computer culture, performance and arcane cultural practices such as; cyphers, divination and their simultaneous concurrence and conflict with present-day modes of expression in contemporary art forms.

This text by Marcel Duchamp initially appeared in black print on green tinfoil wrapped around chewy caramel candy (see Figure 01). In 1953, Duchamp stood at the entrance of Galerie Nina Dausset, Paris, and handed out this candy at William Copley’s opening.[[i]] Duchamp’s A Guest + A Host = A Ghost is an obscure work to which very little commentary or explication has been devoted (Gould 2000). The chewy caramel as symbolic object migrates across the dividing line that separates artist and audience. Its consumptive edible form had haptic repercussions for what an art object means. This emphasis on the ‘post optical’ (Arns 2004) and the paraphernalia associated with haptic chewy caramel with which the artwork exists was executed well before relational aesthetics (about which we will not and simply can not speak anymore about, in case we die of overconsumption).

Duchamp placed an emphasis on the underlying speculative performance of the estranged everyday object in the context of the art gallery space. This concept of the ‘hacked’ estranged, object (or even more recently, so called, détournement of graphical search engines and various other commercial software – think, tubejaying) has become almost an interminable derivative, recurring as if on repeat command with variation, in almost every contemporary art exhibition since Fountain, the glorious (male) urinal put up for reappraisal by R. MUTT. Woefully forgotten are the complex codes in the titles that accompany these works, bearing numerous meanings and overtones simultaneously in many languages. 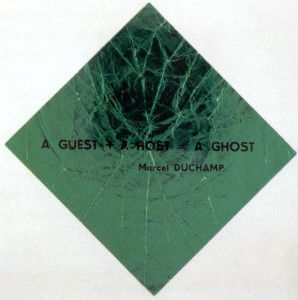 Figure 01 A Guest + A Host = A Ghost Marcel Duchamp. The remaining wrapper, black print on green tinfoil once wrapped around a candy. Image: Claire Copley

Codes are left to distil over centuries, brewing away with potency, an alchemical function, as background process. According to Gould (2000) A Guest + A Host = A Ghost is arguably his most profound work with regard to the ‘reader’. It inspires contemplation by (remote and local) audiences a deliberately obfuscated work functioning as cypher. The idea of an active ‘reader’ and therefore ‘writer’ is especially notable in the processes of consumerism when applied to technology. At the moment, regular unsuspecting computer users are people who are relegated into being ‘read’ only ‘users’, denied the ability to participate in less cursory or ‘writerly’ modes of communication with the digital culture realm. Read/Write exceeds the so called, unparalleled ‘freedom’ of typing a status update in standard commercial Read/Only media (think Facebook, Tumblr, Google+ [your chose of social media here]). Apart from talking about the Death of the Author (a notion most seem to claim to know about, but have never read the source Text) Barthes extends ‘writerly’ to have a performative function where the reader is ‘no longer a consumer, but a producer of the text’ (1974, p. 4). Furthermore, Lawrence Lessig uses the terms ‘Read/Write (RW)’ and ‘Read/Only (RO)’ to describe cultural obstacles when it comes to ones access to permissions and rights. The former, Read/Write ‘analogy is to the permissions that might attach to a particular file on a computer. If the user has “RW” permissions, then he is allowed to both read the file and make changes to it. If he has “Read/Only” permissions, he is allowed only to read the file’ (2008, p. 28). Read/Only he claims is ‘less practiced in performance, or amateur creativity, and more comfortable (think: couch) with simple consumption’ (2008, p. 28). Repetition of Read/Only tasks makes us seem more like mere scripted robots or instrumental mechanisms than humans. For instance, regular (unsuspecting or uncritical) users of social media outlets could be thought of as guests on a cruise ship, they do not have to think about navigation and are in the meantime exploited and controlled beyond all means within the simple role of they consumer that they endorse. They are regulated and subject to surveillance and must play firmly within all rules. In this way, we can now see how the word consumption has been restored to its root origin, the Latin consumere meaning to squander and waste. It must also be noted that the word consumption was used in the Middle Ages to describe a terminal disease (tuberculosis), something threatening that could literally devour you.

For persons who possess an awareness of technical code, there are alternative user paradigms with enhanced privacy measures, and for those _who know_ there is also the deep web or darknetz/s, which according to Lee Brannon (2014), could very well be like ‘Paris in the 1920s’. These darknets are a constructed interchange of forked URL sites and server mirrors; a covert tool for the implementation and dissemination of data across numerous servers, with no one centralised location, for instance the Tor project or Freenet allow such discrete browsing to take place. These spaces are not indexed by commercial search engines therefore it is a place to communicate electronically in relative freedom (depending on technical competency) where one is able to freely enact multiple presences, share and carve up data (returning the modality of the cut-up to its former status as a weapon against consumption).

What is a digital perm?