Recently The Deep Lab released a compilation book with reflections to digital culture, the post-Snowden Internet, and cyberfeminism. You can download it for free or buy a hard copy. This was created in a hot house event by a women art collective. The fact that the group identifies as artists is refreshing, they are critical about choice of technology and proactive about alternative tools and take us on their journey. The apparatuses we use on a daily basis, that harness the unsuspecting user with vender lock-in strategies, are a successor to historical tactics for slavery, victimization and addiction. What is rare is the idea behind the compilations is not necessarily talk about women in technology per se, or women’s (generally marginalising) experience in software development, but rather to make discussion about subjects more inclusive and interesting for women.

This begs the question: how and what are less cursory modes of communication within this regulated digital realm? And why are women’s voices within this techological realm  regulated to a standard white middle class (male) behavioural paradigm?

The term cyberfeminism came from the wake of  Donna Haraway’s Cyborg manifesto, the ‘cyberfeminism’ movement was ‘birthed’ about 20 years ago but is currently experiencing a revival. And so it should, time is never linear, clean ordered and secessional in practice. There has been a lot of critique in the humanities about the Christian theological metaphors and models in Donna Haraway’s understanding of ‘cyborg’, but for now it is a useful term for females working with technology to use and redefine, especially for those women who are not necessarily developers or programmers. ‘I’d Rather be a Sinner than a Cyborg’ by Lucy Tatman, is a great example of a more critical approach  to rhetoric that was never meant to be taken literally. 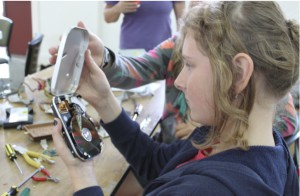 And here I digress, in 2003 I first came into contact with alternative software/operating systems – free software movement, the fact there was an operating system choice and the politics that surrounded that choice, in some quite unusual circumstances. I had been on a residency at what was then called Waag Society for/ new and old media, now Waag institute for science art technology working with KeyWorx  an application framework developed at Waag Society, originally suited for ‘live’ multi-user audio/visual performances. I was using it to communicate across vast distances and with the help of the KeyWorx expert Michelle Teran who knew it well and tutored me and I asked Linda Dement in Sydney to be a remote collaborator, from the fruits of our research through practice labour we eventually head an Electric Theatric Operation an 8 hour performance installation connected live art at Waag Soceity in it’s second floor Theatrum Anatomicum Amsterdam, The Netherlands and ArtSpace Gallery Sydney, Australia Sunday 17 August 2003. At the time the live audio video streaming elements and sending of data realtime _on the fly_ was an absolute technical feat in itself. The general technical set up was gruelling to say the least if it was going to work between continents. A networked video projector was suspended vertically and displayed alternate output from realtime video/animation patches or live audio/video feed into both spaces. Three television monitors placed on the floor in Amsterdam displayed live video outputs of the space and a video stream from Sydney.

This was how I fell smack bang into the circles of Debian and the associated agitation, pandemonium, disturbance to people by participating in the free software world as a ‘self proclaimed’ artist hence the title : Noli turbare circulos meos. Debian wanted to have their 10 year celebration in the Theatrum Anatomicum at Waag, the eve before our event. The space was technically set up and ready to roll for the  8 hour performance the next day and apparently ‘the people from above’ had consented to this party amongst our feminist mise en scene, the space was filled with props: a trunk full of dresses, a large sub woofer, amplifier, bass guitar, accordion, a screen made of petals and flower, a stack of pillows, children’s music boxes. There was no doubt we had to attend this event in order to keep an eye on our  set up.

Arriving in steady flow there were about 50 men geeks with various strains of Debian t.shirts, all drinking plastic cups from a keg of beer. As we were ‘artists’ we were even more intimidating and intimidated. I had not been at all initiated yet into this new world and its implied rules and protocols but I soon found out that using an Apple Mac G4 was extremely taboo. Apart from one other women, Michelle and I were the only women present. And what was even more odd was this woman came up to us in a bit of a fluster and asked if were were Debian developers. to keep it short I can not recall her name but it makes me wonder if this is where Debian Women group had sprung. Debian Women’s goals was to change the project to encourage women’s participation, an equally important one is to explain Debian to women and show them ways that they can contribute.

10 years on there are more role models for women who are interested in contributing to  software development, but truth be know, in general although not much has changed in regard to different treatment in so called, communites/hacker spaces due to their gender and the fact they might not be a ‘traditional’ technologist, for instance in 2012 when Asher Woolf wrote : “Dear Hacker Community, We Need to Talk,” there was so many reactions to her claims, and her server is regally experiencing compromised petty hacking attacks [more info here].

[A version of this was published – as – Mauro-Flude, Nancy (2020) ‘Is That All There Is? The Critical Role of 21C Mediums’. NiTRO 32, The Australian Council of Deans and Directors of Creative Arts. December. Ed. Kit Wise. ] …I stood there shivering in my pyjamas and watched the whole world go up in [...]

“The one who understands is not extracting from the abstract from out of the tone, the rhythm, and the cadences the noise internal to the utterance, the cacophony internal to the emission of the message. He or she is also listening to that internal noise – the rasp or smouldering breath, the hyperventilating or somnolent [...]

Are we tired of talking about the obvious value of culture yet? If indeed, according to the Australian government, that art is useless and culture has absolutely no value, this coven of creatives are brought together to plot an imaginary revenge that involves feminist futuring, witching brews, holograms, assassin laundromat cells and economythologies. Shall we? [...]