Renaissance: Everything is connected

Recently I had the privilege to be taken on a guided tour of the ArtScience Museum in Singapore by Honor Harger – the recently appointed executive director. Honor Harger is a curator and artist originally from New Zealand, who has particular interest in artistic uses of new technologies. It was fortuitous moment in time to go to the museum, but I suspect we can simply expect this level of wonderment each time one visits as long as she is at its helm. Since Honar’s appointment she has introduced a cabaret style programme ArtScience ‘late’ Museum programme held once a month, 7-10pm. The cutting-edge performances with experimental tools bring much needed steam into STEM. 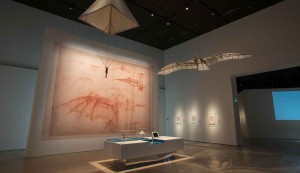 Dynamic artworks radiated and inhabited the place, including interactive exhibits, and hands-on education activities, namely, under the banners of the ‘Prudential Singapore Eye: Celebrating Singapore’s Contemporary Art‘ along with ‘Da Vinci: Shaping the Future’ – an exhibition which truly is a journey through the oeuvre and legacy of the most celebrated artist and scientist of all time, Leonardo da Vinci. Starring his Codex Atlanticus folio sourced from the Ambrosiana Library in Milan, Italy, this rare exhibition of the Da Vinci Codex Atlanticus notebook collection captures the virtuoso of him in his most fruitful years (1478-1519) and demonstrates his significant contribution to sciences, engineering, fine arts, inventions, as well as literary works. Reminding us how the current emergence of new kinds of relations seen so clearly in the Internet of Things hype, is in fact not as new as we might think. Instead prompting us to inhabit systemic thought in a more holistic manner as once was the case in former centuries in which the exhibition truly galvanizes with its focus not just on Da Vinci but how such systemic thought radiates and is applied now by contemporary artists. Ambrosiana states “The folios deal with various subjects ranging from mechanics to hydraulics, from studies and sketches for paintings to mathematics and astronomy, from philosophical meditations to fables, all the way to curious inventions such as parachutes, war machineries and hydraulic pumps” [more info]. 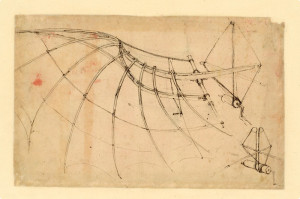 While this land mark exhibition shown for the first time in South East Asia, focuses on the Codex Atlanticus, it takes one through the different elements of his research: the 5 themes featured are: Mathematics, Natural Science, Architecture, Technology and Music. This is coupled with some fantastic commissions both responding to the work and extending from it. For instance da Vinci’s ‘The Last Supper’ – next to ‘Mona Lisa’ one of Da Vinci’s iconic works has a specially created video mapping of it’s ephemeral life – if one hadn’t thought about it to much previously one clearly begins to see the significance of paint as a technical medium alongside interactive tools. As such, the more delicate and lively a system is, the more liable it is to constant change. One of the things that computers (when used in a particular way) may make possible is a new kind of cross-disciplinary expression that is non-linear, interactive, and immersive. Conversely, one could say that with such an iconic artwork that of, ‘The Last Supper’ (1494–1498), this appraisal gives a clear distinction between objects and relations in the work to make complex dynamics of materials visible and ensure that the reserves intrinsic to objects are strongly correlated to the kinds of informal/formal relations in which it engages in its content.

Born more than 500 years ago, Da Vinci’s polymath cross-disciplinary expression, approach, creativity, and approach inspires and continues to innovate. This is elaborated and interwoven throughout the exhibition journey where five contemporary art installations, including three new commissions, which reveal how Da Vinci’s ideas and thinking remain strikingly resonant today. The works are created by WY-TO, Luke Jerram, Donna Ong, Semiconductor and Conrad Shawcross. 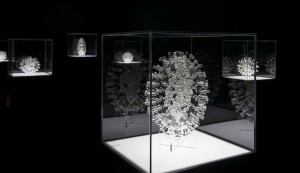 Luke Jerram’s vartious glass sculptures of magnified viruses are now innovating how science visualizes such microbes in turn resulting in a revolutionary understanding of what a virus is for both the public and scientific community. 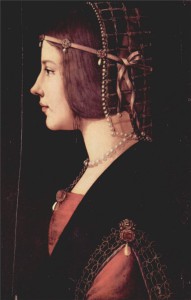 Also in the exhibition the portrait of a Countess of Vichy, Laura Guiscardi de Candia is featured it is also speculated (by some) it is by Da Vinci himself although it is commonly known as to be painted by his collaborator Giovanni Ambrogio de Predis. In any case perhaps the Countess of Vichy was the first cyberfeminist?- just mere speculation, but look at that matrix design in the 14th century hairnets. During the renaissance, the hairnet known as the snood was worn alone. The snood tended to be less fine and often set with jewels, however this one is quite elaborate featuring pearls and beadwork. Hair dressing also gave a woman the opportunity to show off her taste in hair accessories, so from this small detail we can read into her potential exuberance that inspired such a portrayal. 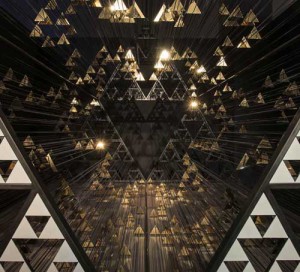 ‘Through The Looking Glass’ (2014) is an installation by the architectural design company, WY-TO as commissioned to appear in the Mathematics section of Da Vinci’s show.  The installation nests an organic fractal within a mathematically generated one. These infinite possibilities are performed by a fractal;  a natural phenomenon and a mathematical set thatrepeates its patterns at every scale. Blurring the boundaries of what is nature and what is engineered, this geometric mirror abstraction provides a compelling entry point to an oeuvre in which objective concepts of repetition and progression merge with the aesthetic traditions of architecture and decoration.

Believing that that by extracting the underlying order of all things, natural and man-made design merge, Da Vinci speaks to us now centuries after his creations with relentless force and conviction. Through Shaping the Future  this selection of artistic compositions point to the central role of technology as a conceptual foundation for scientific and artistic practice, as well as being works of art in their own right.

Radically questions the conditions for serving and service

A collection of tender exotics: interview with Lisa Campbell-Smith