A decade ago referring to the conundrums the Imaginaria UK’s first digital arts prize brought along with it –  Ewan Morrison and Matthew Fuller on Metamute  noted that “In the cultural arena, there’s nothing quite like a prize to get people’s backs up…prizes never fail to set a well rehearsed communal tirade in motion – against weighted selection procedures, against notions of better and best, against the normalisation of unnamed, unacknowledged and distinctly un-objective criteria for ‘quality’, and so on.”  Indeed such social critique and public praise gives way to these forms of cultural capital  nor does the habit of rising to the occasion appeal to everyone.  However problematic these opportunities are there can be no doubt that such accolades inspire and motivate young students to continue upon their chosen pathway.

Recently I had my first experience to within the mechanics of what it means to choose an artist for an art prize – a part of a jury, I had the pleasure to award Linn Halvorsrød the prize Trondelagsutstillingen – which brings with it a title of the Norwegian University of Science and Technology (NTNU) artist for 2015/2016. As a part of the jury I was required to articulate the juries reason for the choice of the artwork “Eventyr“ which exhibited an unusually exuberant facility and energetic handling of material without affectation or pretense. It was the ingenuous freedom conveyed by the artist, Linn Halvorsrød, and her vigorous use of form and colour was most immediately evident. This is but one of the distinctive features guiding and enchanting the viewer out of these new dark ages we currently imbued with. 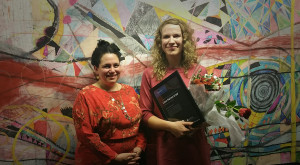 The NTNU artist award was presented at the opening of Trøndelagsutstillingen 39. Each year the Regional Trøndelag Exhibition presents a variety of new contemporary art. The main criteria for entering the artwork is that the artists have a connection to the Trøndelag area in Norway. They may be students from the Art Academy in Trondheim, or simply mid career or emerging artists, whatever their background or training, they are all exhibited together and the most outstanding work is selected by a jury. Since I was unfamiliar to the area, it was especially a unique chance to see fresh and ambitious new contemporary art being made in the Trøndelag area and how these artists are relating to our society, culture and the world in general.