In the wake of Brexit – Dispensing Spice into Scandinavian Space.

Something is rotten in the state of Denmark.
– Hamlet, Act I, Shakespeare.

On the eve of the Brexit outcome I was sitting in South Hobart, hearing, listening and watching the results unfold, absorbing and reacting to the hysteria rippling through social media channels that one could refer to as the town square 2.0. Quite spent – having just finished a large scale project  – a pizza was delivered by a delivery person – I asked him “what do you think of this worldy outcome!” – He laughed and replied – “What? Oh Brexit –  I don’t care – I’m German!” and with that he was paid and left.

In the wake of Brexit, or as some brave people have title ‘The Lexit’ (left wing socialist) case for leaving the EU has been given little or no coverage. Not to mention other countries such as Norway, whom never even entered EU, as usual sit on the fence and whittle their opinion away as the wood slowly disintegrates underneath their supporting innards. For some, this attitude is is anti austerity pro freedom of movement. However for another whom, is a European outsider, but who ‘incidentally’ has an European father and say may have lived in Amsterdam through the EU reformation – which seemed to take away anything experiential that may have been left in the city in its wake – The Lexit – said ‘No Fortress Europe’ or EU driven punishing of workers and scapegoating of migrants and refugees by bankers and big business. Most of the leftist’s treated anyone from Eastern Europe or beyond, like a third class citizen whom owed them something to even exist in Europe, or at least till they assimilated, integrated cultural habitus and learnt the colonial language.

Some of the front line they like were wavering till they may ‘googled Lexit’ and also read the editorial in the Workers Revolutionary Party paper ‘The Newsline’. Some refused to let the right wing Brexiters appropriate the socialist case for leaving the EU.

As an Australian nationality but still from an English colony, I had not the privilege to vote. Curiously as the course leader of the Trondheim Academy of Fine Art (KiT) “International” Master of Fine Arts. The experience of participating on short term notice contract for 2015/6 academic year.  It was to say the least, admittedly a “baptism by fire”, a military concept, a software development term and of course originally a Christian axiom, it bases its overall reflections on these experiences with the graduating MFA student’s and a nod to the kit staff. I was admitted as an assistant professor, although it came to be that once arrived I realised i was the most qualified  – being awarded a PhD, but lowest paid and rank!  In this sense, ‘disquisition” is interpreted quite directly, in terms of being exposed to other cultural settings and tenuous situations, and drawing from them types of creative and critical realisations.

Just as the MFA graduates expressed in their creative processes, which one may clearly note have enhanced such embedded tensions. Therefore, in order to allow for a clearer understanding of the main arguments exhibited in the artworks you encounter in this graduation catalogue, in order to fully contemplate the works of these artists, dear reader, you are invited to do a short ‘Apperception Test’ – Please note down the following answers for yourself – 1) What is your place of birth? What place do you call home? If you even have the amenity to be able to refer to a singular place called home, is this the place you currently live? 2) Do any of these add up to a singular answer? 3) Does the act of answering these questions for yourself challenge and distort common presumed perceptions of having a singular place of belonging. If so, then, you are probably in suitable company, and if not, we entice you to find yourself enmeshed in the realm of transnational creative art production. This is best exemplified in the screenshot of a Facebook status update of a first year MFA student in discussion with peers over the (mis)appropriation of cultures (see fig 1.).

It is a well worn adage by now that ‘art distracts and art is received in distraction’ but we must perform ‘new tasks of apperception’ wrote Walter Benjamin (1936-9, p. 269) these undertakings thread through the 2016 KiT MFA graduates creative practices. It should be noted that the term ‘apperception’ is used within this discourse to refer to the self-awareness of the perceiving subject, in distinction from the object-orientated process of perception. It was during Benjamin’s time that architecture had historically offered the prototype of an artwork, but then film (or cinema) was also seen to have equivalences to this particular architectural space but further offered more social uses of such temporal and qualities, that now also can be labelled ‘placial’ (Casey 1997). Meanwhile the convergence of materials and mediums – the training ground of distracted reception has migrated from painting to cinema to television and again to the multitudinous sites and social functions of computational media. For nearly three decades we have been experiencing a new more diffuse ‘cult of distraction’ (Kracauer 1995, p.324)’ which the Internet carries in its wake, a never ending ambient Global awareness simultaneously in our embodied locale. Not to mention the ‘ancient lament that the masses seek distraction (1936-9, p.268)’ from which Benjamin had distanced himself so decisively also resonates through the artists work in this exhibition. Consequently, the works in the exhibition produce a renewed and new historical interest in refreshing parleys of apperception held up for reappraisal. For instance, we see in figure #2 a box of Annatto (spice from Mexico) often referred to as ‘the poor man’s saffron’ brewed in an artwork by Enrique Roura Perez, whose main area of research was the cultural significance of the domestic window, whom also boiled a Mexican spice into the Scandinavian Space. 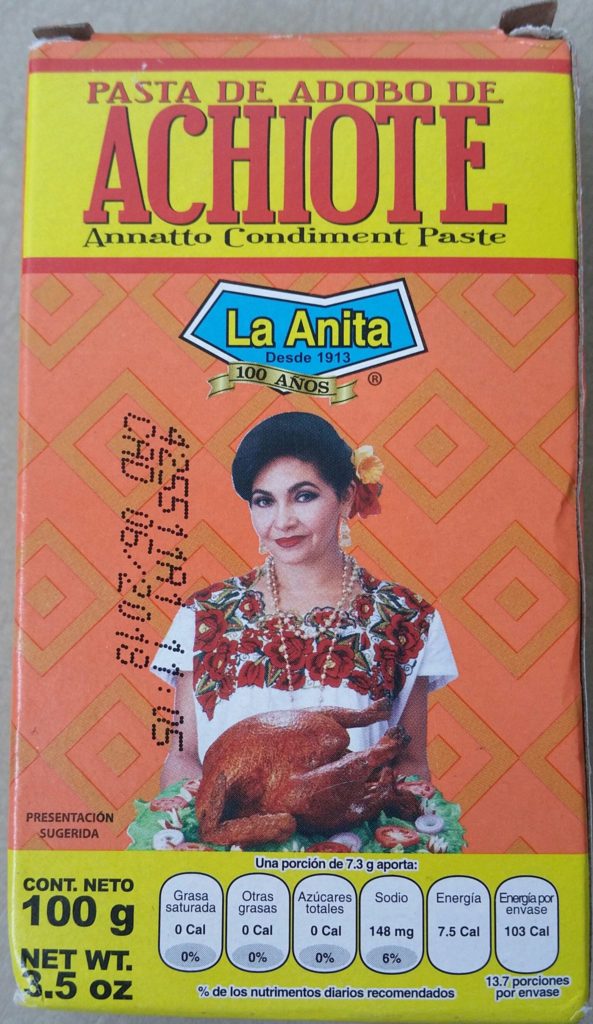 Annatto (spice from Mexico) introduced to me as as the ‘poor man’s saffron’.

Fig 2. Annatto (spice from Mexico) often referred to as the poor man’s saffron. Although some people from Ecuador see this as an insult referring to their so called indigenous spice, as colonial Spanish racism.

Through the attempt at practice-orientated research the KiT 2016 MFA graduates engaged in a manifold of play upon and reflection of our global predicament where displacement threatens our ‘implacement’ at our every turn. It is not an exaggeration to say that far too easily many of us may even find ourselves in a place we never intended to be! To be sure, false promises, lures and lies, people smugglers, wheeling and dealing happens not only on the street or on the refugee boats. This ineluctable uncanny feeling of not being at home is endemic to the human condition, intrinsic to habitation itself. In this graduation show even the traditional landscape, usually a most accommodating presence, alienates us. The creative traditions of these artist’s is without question diverse – but as a whole what unites the group is their ability to transform materials into astonishing and often perplexing works of art, which raise deep-thinking questions about the world and our position within it. Presenting vastly disorientating experiences in various ways, the group stimulates and encourages their audience to adapt themselves to alternate aesthetic forms of self-awareness in order to perceive their artistic intention. However raw and politically orientated these messages may be, when placed in the realm of contemporary art, they have the potential to lead us into the world of magic. The practice becomes akin to alchemy, the ancient mysterious power to transform a utilitarian substance into something of profound significance.

The alarming ability of people and organizations to misappropriate and recolonise wild configurations and marvelous tactics, condensing them into a homogeneous version for easy digestion, is not to be overlooked. An analogy of a blue and white Nivea container comes to mind, its vast smothering thick viscera spreads over continents persuading the local people to forget their own balm. In this genealogy the act of creating is defined, like most things in the twentieth-first century, by acts of consumption. MFA 2016 Graduates consideration of material is refreshing and able to move away from the often dominant approach within art production, practices and related (western/capitalistic) theories of the banal ‘e-fluxification’ of the more predictable art world.

In this regard, the MFA 2016 Graduates were able to bring forward a contested and unsettled base of knowledge, one that is productive in grappling with creative practice in the global art world, and not be mired in a Eurocentric neo-liberal logic, that all the while imagines itself being critical of such logic. At the same time, the graduation projects stay close to critical thought, creating an important intersection and charting out an exciting space between critical theory and political comment, or between a western philosophical understanding of ‘the subject’.

To conclude the artworks, methodologies and processes encountered by the  graduates drew out an array of critical viewpoints, gathered around issues of post-colonial media and identity, which was thrilling.  These international group of MFA students creatively approach their mediums as a force of imagination,reworking materials and their environments, and relating to (post-colonial) history and society through giving voice to subjugated knowledges. Although ultimately tragic, afterwards many personalities retreated into their own safe space of defence after the graduation party was over. And then it seems that Brexit washed over us again, perhaps another reminder of the deep imperialism, that mutters deeply through the aether.

Edward Casey, The Fate of Place: A Philosophical History (California, University of California 1996).