As I write about the moon’s new fury, my fingers summon symbols on the keyboard in a proprioceptive séance of transmission. I am taken by the mood of introspection and an overwhelming compulsion to yield. Is this because I’m writing on the eve of a waning Moon?

How remarkable that antediluvian crescent forms, arcane rituals and occult themes continue to bewitch and trouble me so thoroughly today.

Pluto’s celestial body is indeed stationing in retrograde (until October). This slow orbiting planet induces contemplation, transformation and extremes. It would be hard to argue that destruction, power, control, turmoil, compulsion and obsession are not apparent in many parts of the world recently.

Although potent, such manifestations are paradoxically tacit and awkward to measure or validate. I’m reminded of poet and philosopher Lucretius: ‘consider, therefore, this further evidence of bodies whose existence you must acknowledge though they cannot be seen.’ 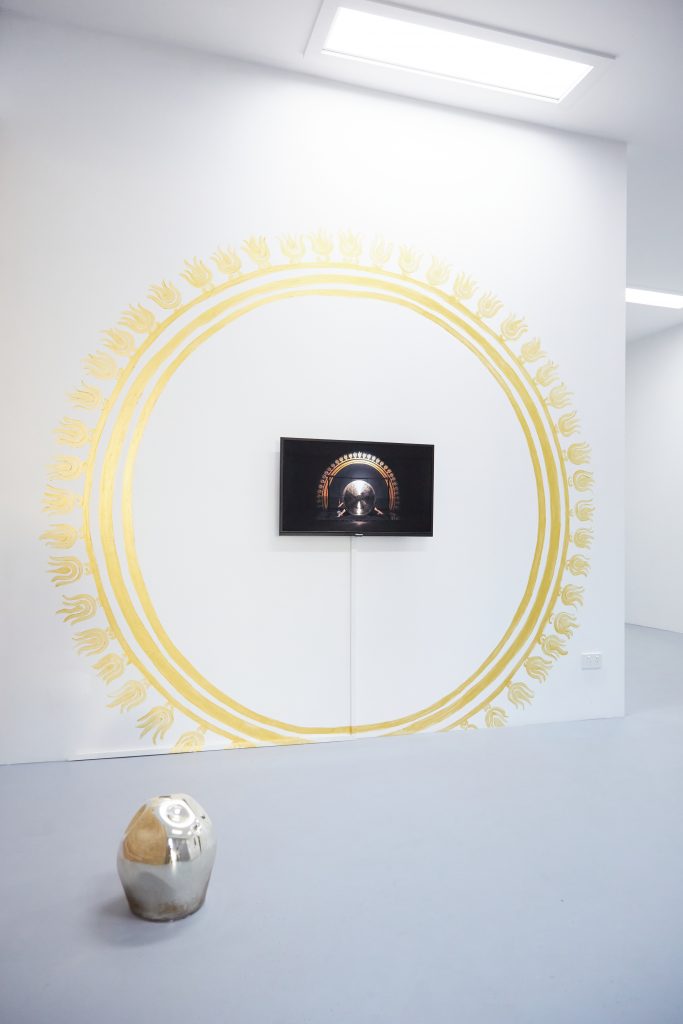 Similarly, the moon’s new fury is a thought-provoking exhibition about the ‘transformative potential of the unseen, the occult, and the supernatural’ featuring an assembly of artworks that fold in an assortment of composite cosmological and cosmographic cultural lores.

Aflame, A Singing Sun (2019) is an installation augmented with an extra-terrestrial metallic particle. The artist Naomi Blacklock is summoning otherworldly entities. It features a golden halo bonded to the iconographic Prabhavali, acknowledging the Hindu deity as a shifting identity through time. The performance — shown in the gallery as video documentation — possesses a corporeal quality that is defiant and unnerving in its cacophony and mayhem—an ode to those who resist subjugation Exceeding the constraints of conventional bawdy witch vernacular.

Seeding the grounds for fundamental change involves more than our outward actions. Freedom fighter Angela Davis brought about a perceptual shift to the limitations of the movement by affirming that profound change that is ‘radical simply means “grasping things at the root.”’ Davis cut through the racket of second-wave feminists’ debate about indiscernible household labour. The potential of metamorphosis starts from the bottom up. Admittedly this can be challenging to comprehend as a priority when drenched in the banalities of domesticity. 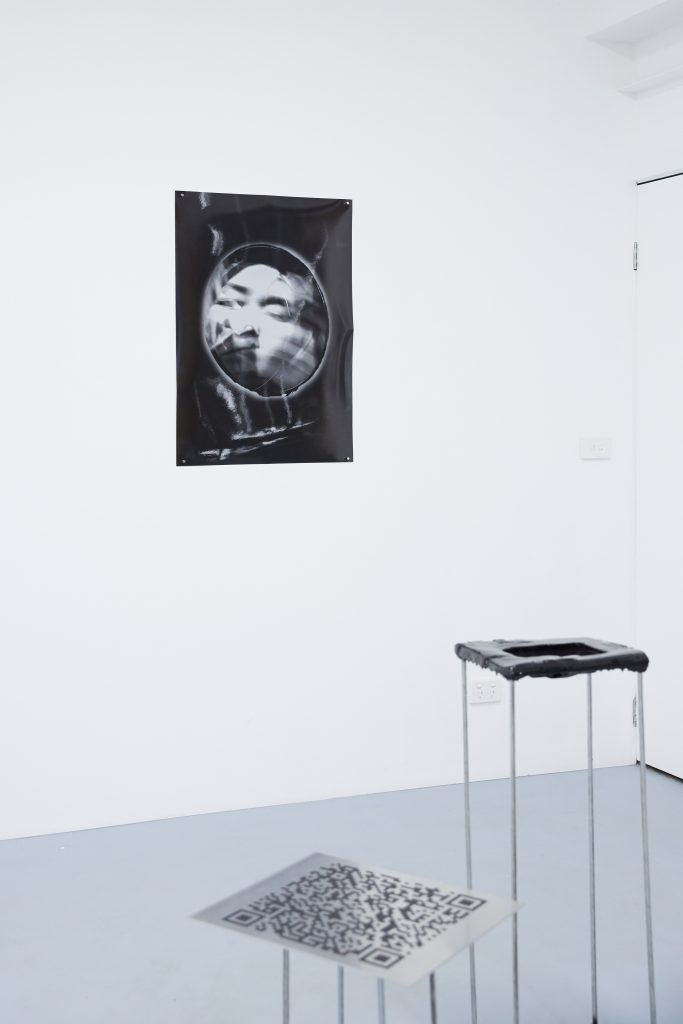 Elucidating the experience of exile, erasure and banishment, a series of photographic self-portraits by Meng-Yu Yan 颜梦钰 Orb Sighting (Moon in Leo) (2020), Halo (2020) and Moon Phase (2020) provide a captivating reflection of how the celestial hall of cosmic mirrors plays a part in the terrestrial life of many beings on our planet. Again I am struck with the insight that as the moon edges closer to the Sun and away from our planet — during the waning crescent phase — we are left to countenance a compelling sliver of illumination in the darkness.

The moon affects how currents move through the ocean. These flows are analogous to the winds atmospheric equivalent. The artworks of Anna May Kirk Night Air (breath) (2022) and Night Air (rock) (2022) embody this as they gesture toward harnessing the ephemeral aether. The pungent vessels, talismanic orbs, and surfaces accentuated in these delicate sculptures expose the eccentricities of methods for archiving atmosphere and lifeforce. This paraphernalia provokes questions about the fluidity of the aether. I’m led to wonder about impurities in the air: Does the wind’s movement of air transport them?; Or do contaminants move through the atmosphere coerced by other types of energetic currents and actants? Despite all the measuring instruments available, the processes of cosmological repulsion are intractable, and the details of how such clusters form largely remain unknown. 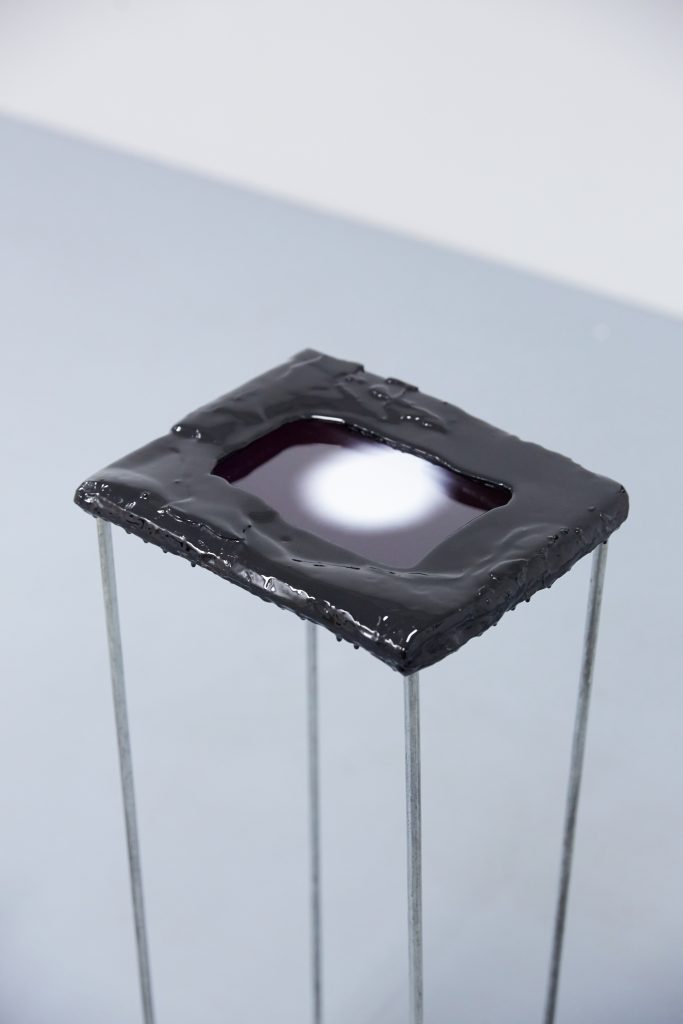 Convoluted manners of valence are present in Technoplasm (2020/2022), a sculptural alter by Anna Pogossova, an ectoplasmic portal that navigates the potentials of extra-terrestrial space. Along with the fact that the lunar cycle guides one of the most formidable elements in nature: water. The moon’s pull generates currents that move through the ocean and thus shape coastlines, and working in tandem with the Sun, it creates solar waves. The human body is made up of an average of roughly sixty per cent water: this could be one salient reason many feel the pull of the moon’s gravitational lure. The moon’s phases are frequently associated with fertility rites in cosmological mythologies. The Ngarrindjeri Nation (the First Peoples of the River Murray) are said to experience the crescent moon as a ‘promiscuous woman’ who became waiflike during this waning.3 Or we may learn more about the enigmatic character Chang’e (嫦娥), who took refuge in the moon as a demesne for escape. Chang’e is nowadays known as the name behind China’s lunar exploration mission. 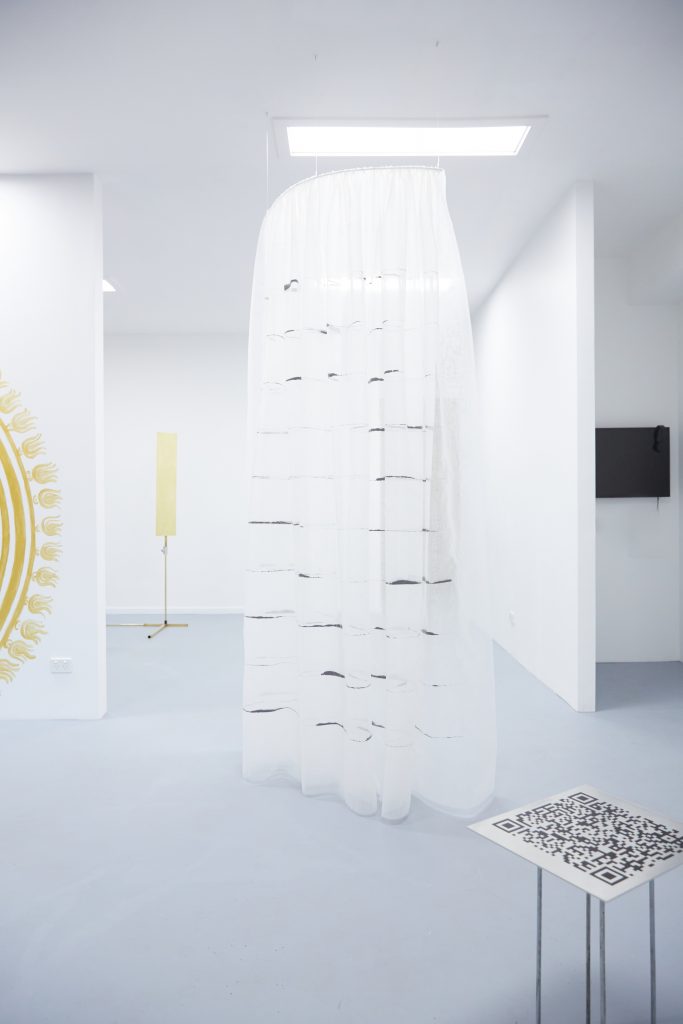 Orson Heidrich taps into the evanescent dearth in Multispec (2021) through file format dance improvisation. The temporality of this 3D assemblage of ‘Internet artefacts’ exhumes the substratum of networked infrastructure far too often obfuscated and defective by design. The moon — the Earth’s only natural satellite — is now escorted by synthetically engineered orbs that transmit and record, or become, merely the flotsam and jetsam of obsolete space junk. The moon is ambiguous by nature: it offers a guiding light in the sky and may arouse peace and rumination. The transcendental leitmotif continues into the diaphanous spiralic veil featured in Milky Way (2018).

Sundari Carmody intimates interstellar dark matter’s ability to shape and form how we experience ecologies, kernels of ingredients in a spectrum of density fluctuations pervaded by relics from epochs of which the stellar distribution of cosmic strings might be detected. I can freshly appreciate the cosmos as a vessel we have emerged in and that we are made of these atoms and elements that permeate it. This work reminds me of an understanding I have when I suddenly comprehend that something I was captivated by seems vastly inconsequential. I should search for a new combination of elements concerning this newfound awareness. 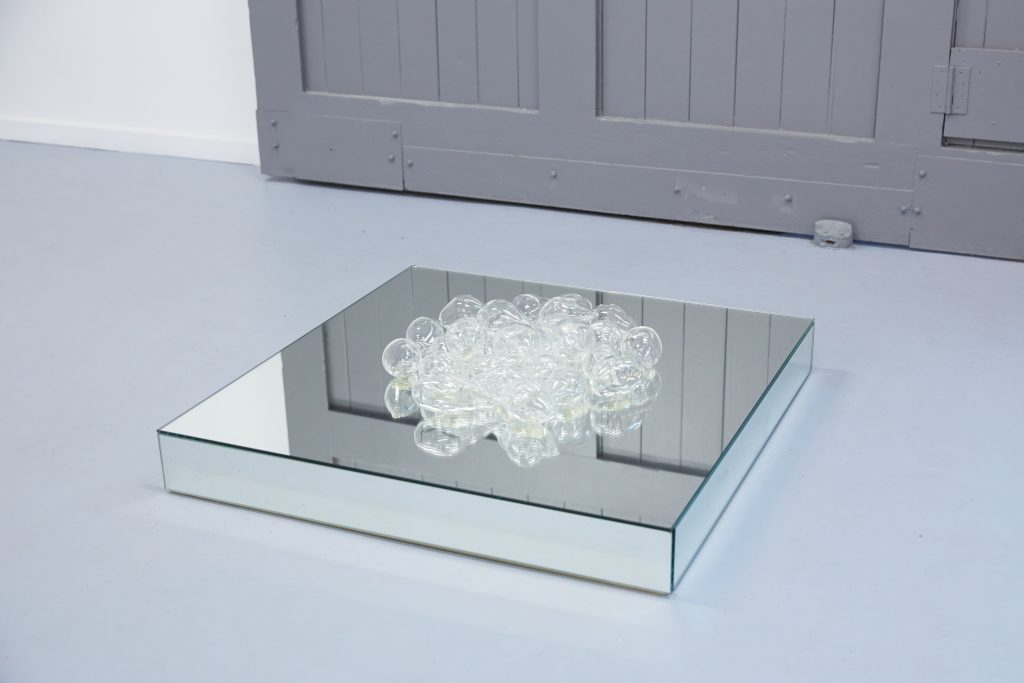 Beyond what many of us accept, we must find ways to make the unobservable palpable – so that the indiscernible and the equivocality may guide us ‘into the new world’. The visionary poetry of Manisha Anjali’s Twin Horses (2022) establishes that the space in the mind is without limit.

I am led to consider how transformation comes from within us, and much of this remains shrouded in mystery which only adds to its potential for radiance. The indeterminate nature of life forms mustered by the human imagination left untethered: being what it is, there may be no boundary to what there is yet to imagine aesthetically.

I am left with an unexpected sense of formidable wonder that something has been fundamentally altered.

the moon’s new fury produces a sensation of appreciating that while scientific progress and transformation are — for better or worse — radical and dynamic, the more impervious modes of ritual and cultural transfiguration capture the élan vital of metamorphosis. 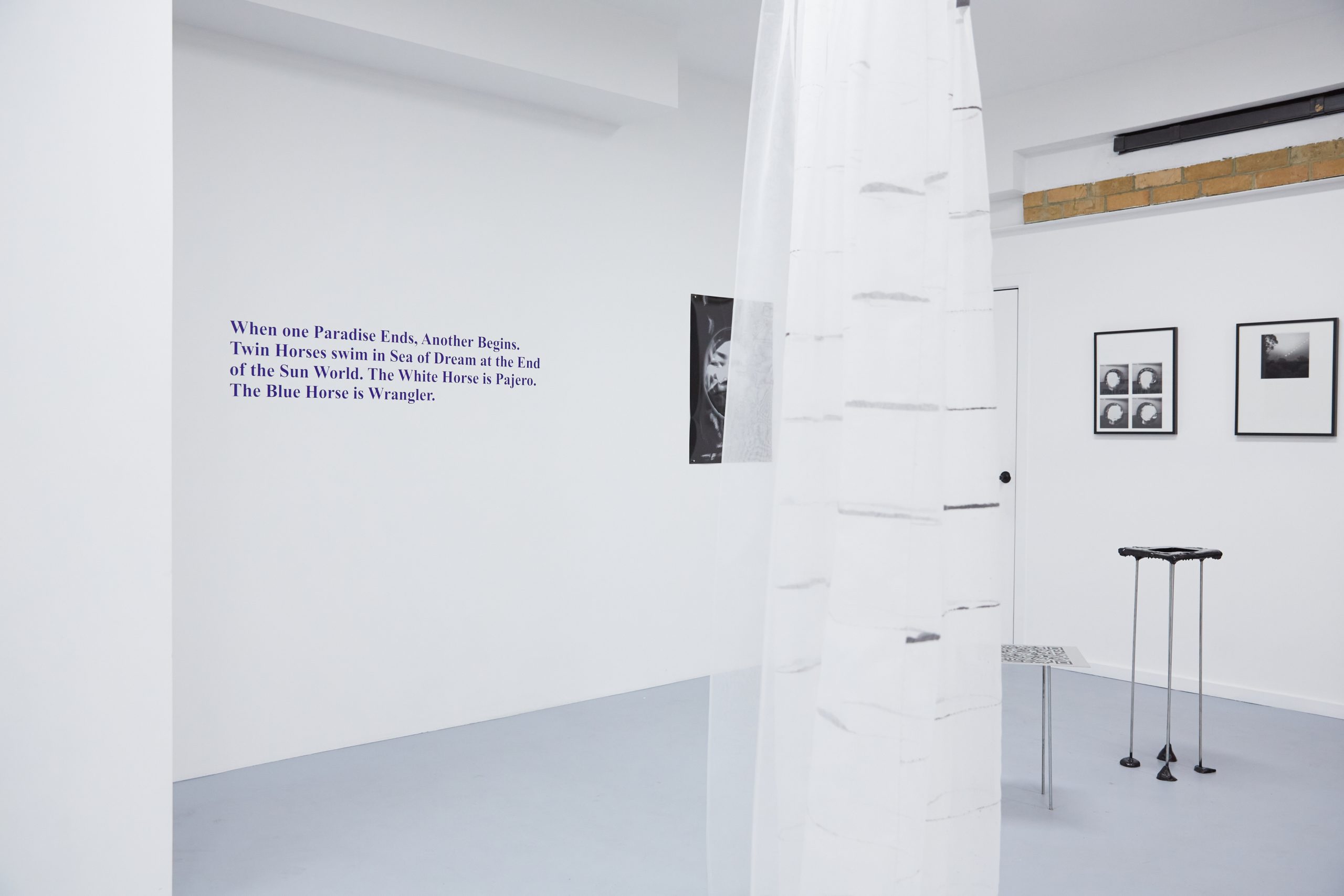 A version of this text initially appeared in Unmagazine https://unprojects.org.au/article/diaphanous-materiality-in-the-moons-new-fury/

Lucretius, On the nature of the universe. Translation R.E.Latham. Penguin Books, Middlesex 1951, p.35.