10,000 feet in the sky is one of my favorite places; no internet, no phone connection, no distractions and plenty of time to watch, write or read. When I entered the plane to fly to New York, the ‘Wi-Fi on board’ sticker caught my attention immediately. My favorite white spot was gone. I took a photo and posted it to Instagram. 30 minutes later I switched my iPhone to flightmode. After take off I switched on Wi-Fi at my laptop and found out that this Wi-Fi on board comes with a skyline high price. So I could still enjoy my favorite white spot for now. 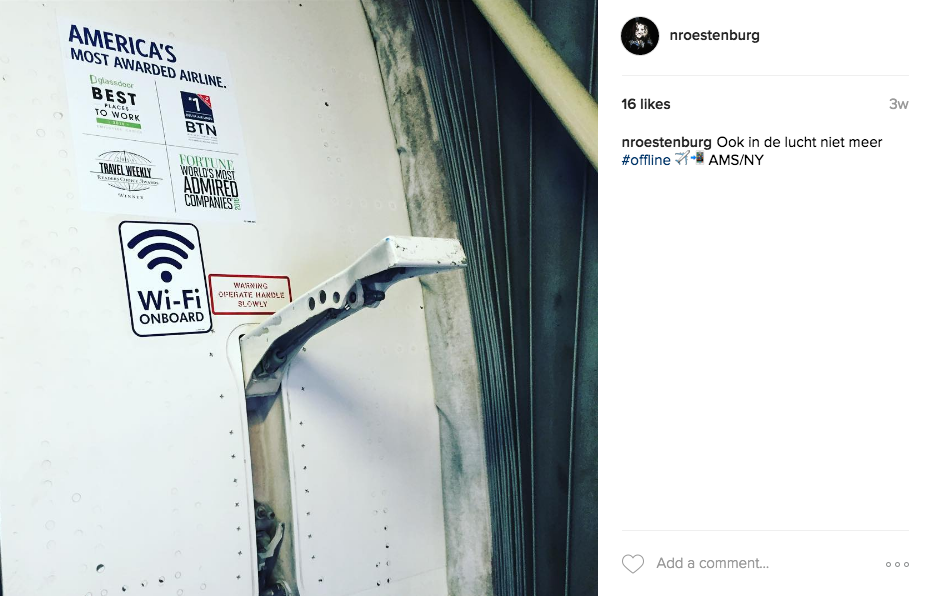 I went to New York to talk to artists, researchers and curators that all use, or reflect on, the internet in their work. After 6 months of research into post-internet art and/or post-digital art, I do not like to mention these terms because it seems that no one agrees upon any of the definitions. Usually, the term post-internet (the most hyped one) refers to artists that have an internet state of mind, or are aware of the internet and its power, structures and strategies that they use as an inspiration for their work. The term sounds nice, which is good in terms of marketing, but its time based positioning (post- meaning after) goes together with endless discussions; it implies that we have moved beyond the internet, while we use the internet more than ever. Post-internet art reflects on contemporary art that is affected by the internet in terms of blurring boundaries between the online and offline, virality, amateur culture, web aesthetics, memes, online circulation, disruptive business models, etc. etc. etc. Personally, I am interested in the blurred boundaries between the online and offline, and how artists reflect on this in their practices and works of art. I am also highly fascinated by the ‘IRL fetish’, the withdrawal from social media and going offline movement that is emerging since a couple of years as the result of us being aware of our own addictive manners and behaviors that we got for free with our first smartphones. Especially, I am interested in the relation between this offline movement and post-internet art.

Directed by screenshots of Google Maps’ directions (I didn’t have unconditional internet) for every appointment, I went interviewing the NY (post-inter)net art scene. Although it is no longer a niche, it is still a small world. I mainly talked to artists asking them about their first internet experiences, their role as an artist, their practices, and the relationship between the digital and physical. I also asked them what they think of ‘being post-digital’.

One of the interviewees was curator Lindsay Howard. Over a strawberry lemonade, I asked her questions about her curatorial practice and the exhibition ‘Temporary Highs’ in which she brought together artists that reflect on our collective obsession with sharing our highs (and lows) online for instant gratification in the forms of likes, favs, <3s, and retweets. A separate post dedicated to this interview and the exhibition will be published on this blog. 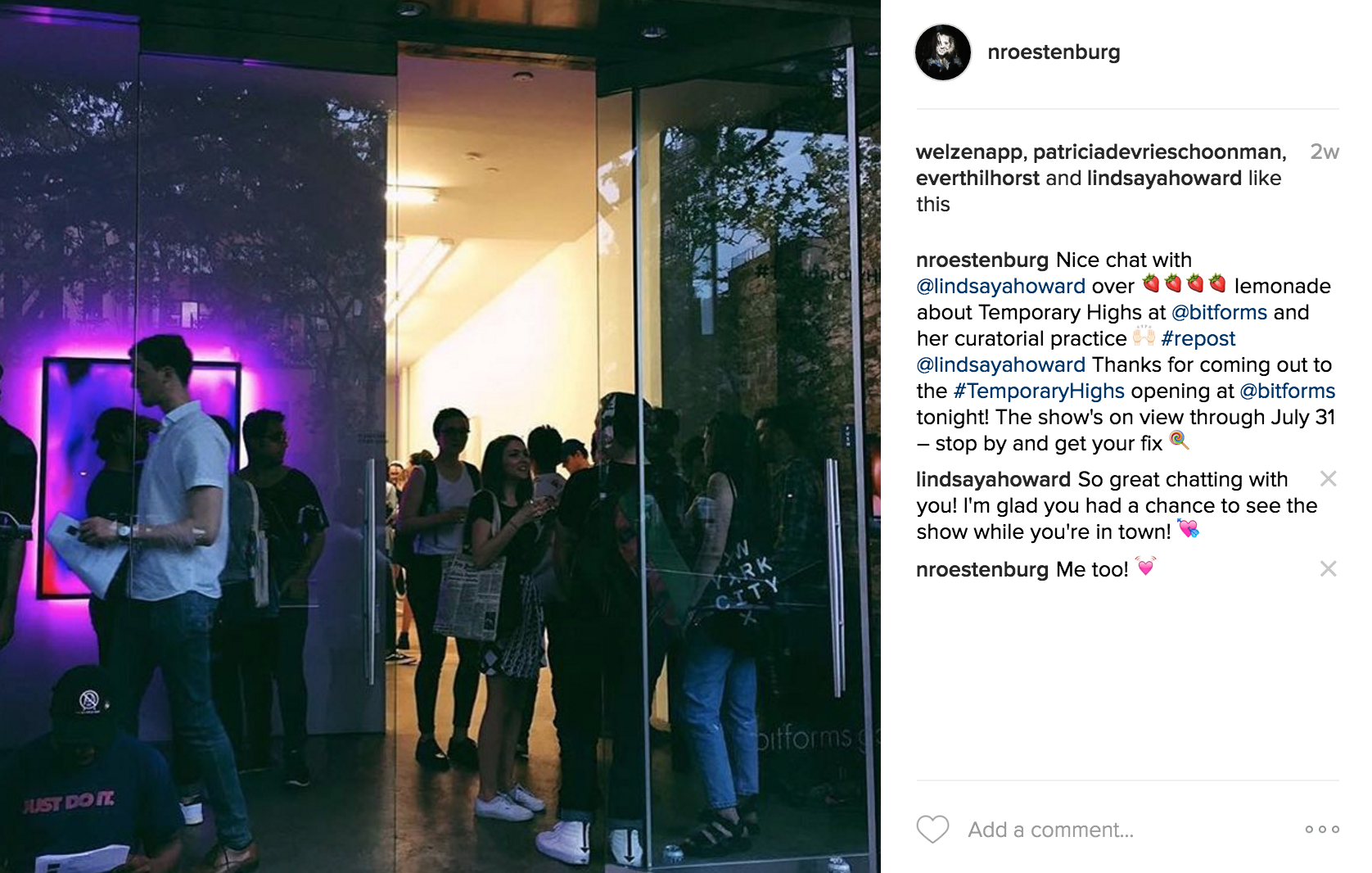 A lot of the conversations with artists I spoke to eventually turned to the struggle of fundraising as an artist and paying rent in NYC. I also spoke with Douglas Rushkoff, who’s latest book Throwing Rocks at the Google Bus perfectly describes the economy of growth that you feel, taste and smell everywhere in NY as soon as you arrive at the airport. I talked to him about the arts, which he left long time ago.

In the middle of busy china town I visited Rafael Rozendaal. We talked about his very popular websites, translating the digital to the physical, and his efficient way of working that makes him save a lot of time to go on holidays. Why not? If your inspiration flows when you are bored, you better get bored on a beach.

In 2010 Artie Vierkant wrote the much-cited article ‘The Image Object Post-Internet’ as an artistic statement and critique of contemporary relations to objects. In both his texts and his visual practice as an artist, he explores how images and objects fluctuate between the digital and physical.

Nicholas O’Brien’s main medium is the video essay. With his work he tries to articulate a better or more precise language of thinking about conditions of virtual existence through network culture. 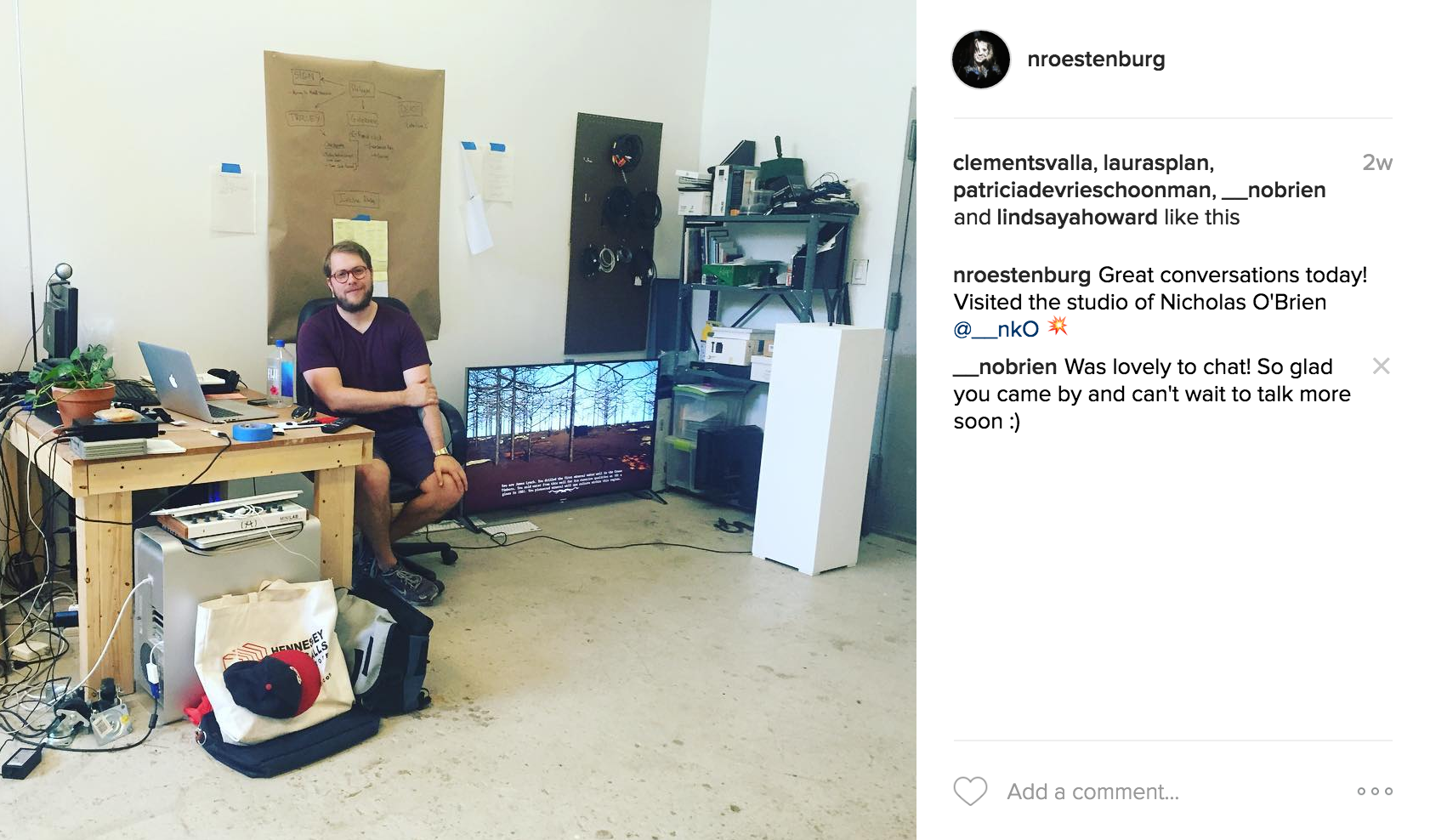 Mark Dorf aims to reveal patterns for a better understanding of the world. Nature and the landscape are recurring themes in his work that discusses the relation between the online and offline in direct and indirect ways. 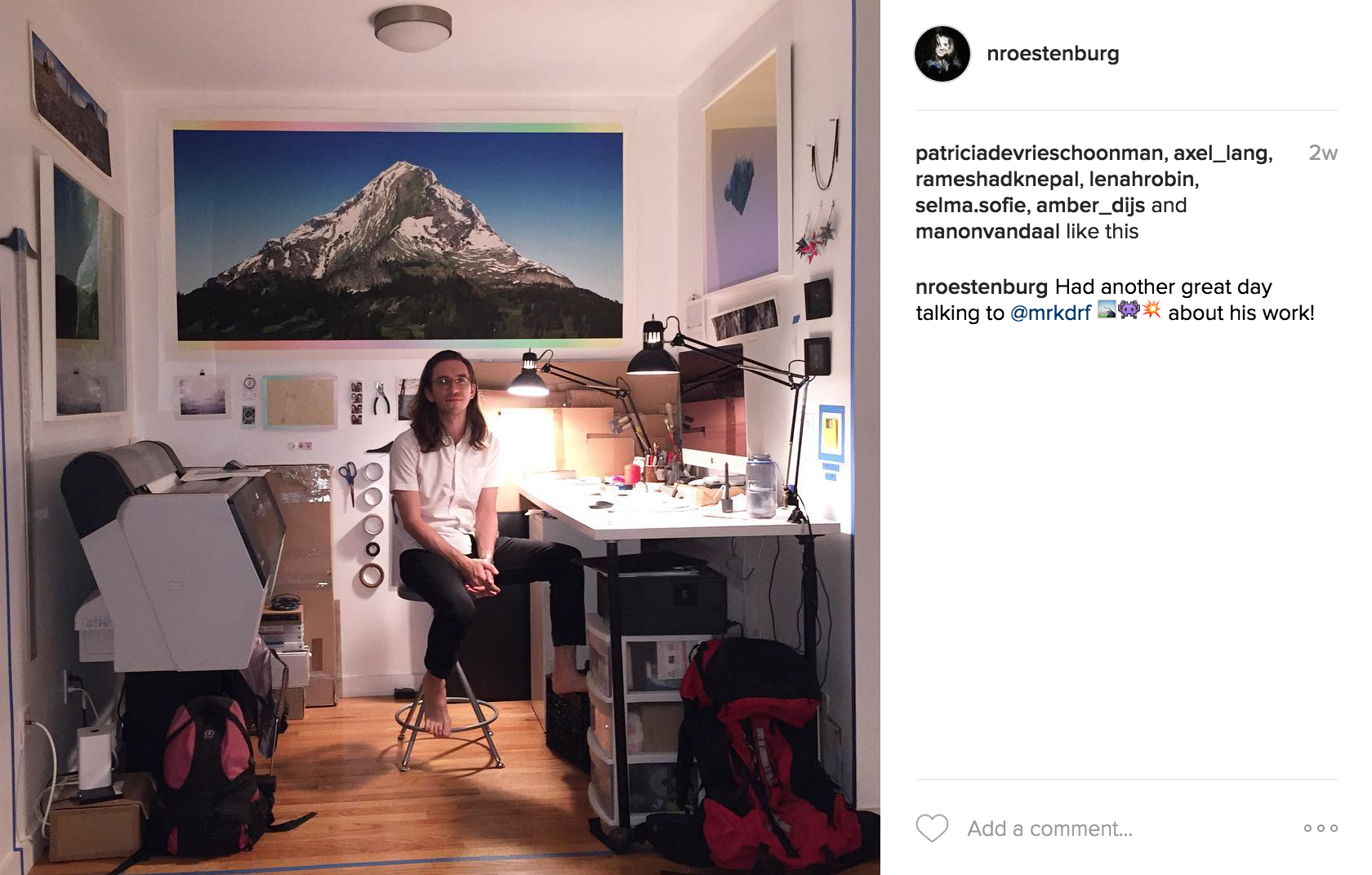 Clement Valla is perhaps the best-known artist of the scene, at least his collection of melted bridges on Google Earth rings a bell with a lot of people. I couldn’t resist talking about this project, and to ask if he is still hunting for ‘glitches’. But we also talked about his latest project ‘Surface Proxy’ in which he 3D scans objects and layers these with a physical photographic layer printed on linen.

I also had a cheap wine with Nathan Jurgenson, a sociologist and researcher at Snapchat. His research is all about selfies and applying social theory to social media. He also organizes the annual Theorizing the Web conference, will release a book soon, and has just released a new platform; Real Life. Unfortunately we didn’t have enough time for an interview but I will find another way to interview him about his work. 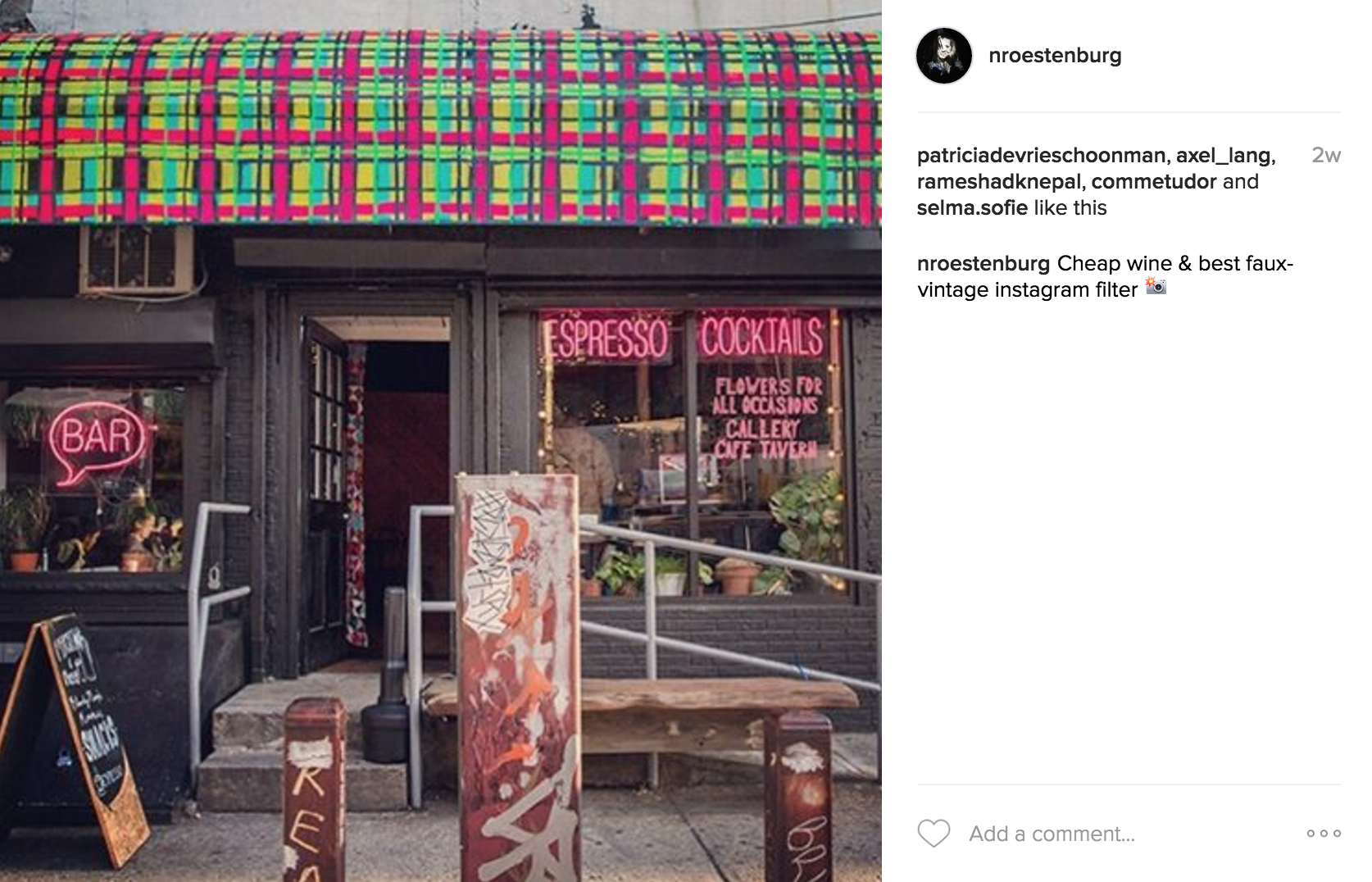 On the plane back from NY to AMS I was sitting next to a beautiful woman from Nairobi who asked me if she could eat the headphones covered in plastic that the flight attendants had just handed out. I kindly told her that headphones are not very tasty and that instead she could listen to music or a video with it. She told me she didn’t need them. For the next 8 hours she was not watching anything, not reading anything, she was just sitting and staring. She seemed okay with this boredom that I cannot even imagine enjoying. After 8 intense days in New York with a very intense working pace and always-on(line) vibe, this woman was an illustration of the complete opposite. Back home I turned off Facebook, Instagram, Twitter, news updates and all kinds of other notifications on my phone. Not because it makes me feel better when I open one of the apps and see all the messages and notifications in red popping up. But because this trip made me even more aware that I need to spend more time offline.

The interviews and conversations resulted in 10 hours, 7 minutes and 55 seconds of audio recordings. Since I recently became a big fan of podcasting I have decided to waste a little less time (or money) on transcribing interviews and decided to start a new experiment! Therefore, some of the interviews will be published as a podcast episode. Others – because every experiment has its beginners mistakes – will still be published as a written interview on this blog. 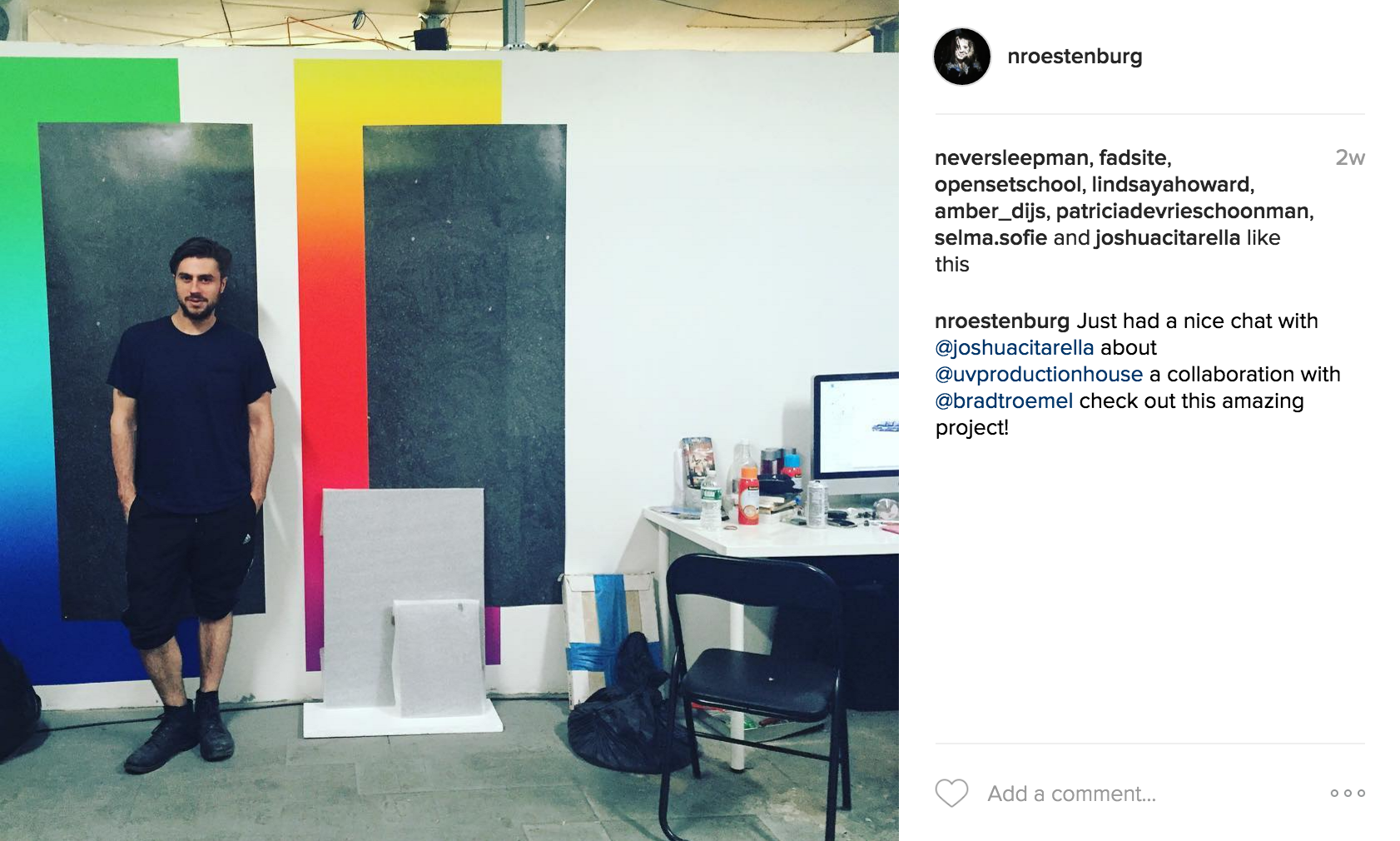 The first episode that you can listen to is an interview with artist Josh Citarella. I talked with him about his project UV Production House that is a collaboration with Brad Troemel. UV Production House is an ingenious working model for artists to lessen the risk and debt associated with being an artist. Josh will introduce the concept himself in more detail. While listening to the interview, I recommend you to have a look at the project: www.etsy.com/shop/uvprodcutionhouse.

I want to thank all the interviewees for saving some time to chat with me, it was great meeting you all IRL! <3 <3 <3

Addie Wagenknecht at MU, Eindhoven. Photo © Hanneke Wetzer.   Borders evoke conflict and definitions. Borders are often invisible or at least presented in an invisible way until a glitch reveals some or all of their mass, making way for vulnerability that allows us to slip in. According to American artist Addie Wagenknecht, this can [...]