Peripheral Forces: On the Relevance of Marginality in Networks
Daniel van der Velden is a is designer and researcher. He organized the Quaero (Latin for ‘I seek’) event at the Jan van Eyck in 2007 and has been working on alternative interfaces for search results, to move away from the ‘top-10-search-result-experience’, and to create new search options and visualizations. At Society of the Query, Daniel is speaking on behalf of the design collective Metahaven. 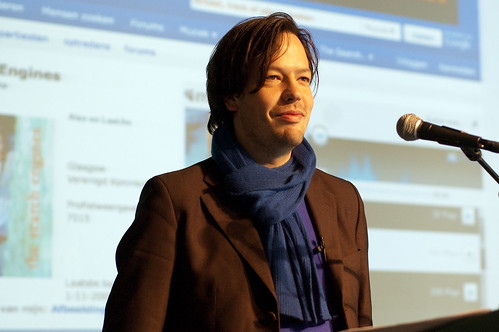 His talk starts with the song “Drive By Hit”, by the music group ‘The Search Engines’. The Search Engines’ song on Myspace illustrates the fading distinction between search engines and social networking sites. More and more these different intranets deal with one particular problem: how to become and stay a main source of information within ‘the growing pool’ of information sources.

Daniel’s talk is the result of a thesis that was developed at both the Quaero conference and the following discussions during the 3 months of research that lead up to the ISEA 2008 exhibition in Singapore. In this thesis Daniel (and Metahaven) stated that the authoritative sources of print have been exchanged for socially powerful, nodal publishers. This form of power is built on social ties, that replace the old fashioned hierarchical authority. Moreover, the system of ‘peer review’ has been exchanged for a social ‘peer pressure’ of linking (nodes feeling the pressure to link to nodes that consent or correspond to their own opinions), which makes most linked nodes redundant. The interesting challenges to any idea, notion or argument are insteas developed in the sphere that is exists outside the center, in a periphery or bailie. These are often not directly connected to the statement and exist isolated as isolated worlds away from the powerful, reigning opinion. Metahaven wants to develop a search engine that connects these different spheres, to provide different points of views on particular issues and be able to put emphasis on the marginal forces.

Daniel van der Velden states that we need a new world political map that takes the changing, globally distributed power relations into account. The biggest question concerning this statement is what such a map would look like (probably dynamic), and how different forms of power can be registered in such a map?

The internet as a finite architectural object, as is reflected by the data centers, the ‘dark fiber’ networks, is actually a real terrain that is not vague at all. They are real geophysical terrains. the physicality is actually finite. Metahaven would like to argue for a political map that would reveal the networks of power to generate a better oversight of where information exists, to connect these different worlds of information and the geographical world as we know it. They want to open the black boxes of cloud computing.

Such a map would also make clear that our use of Google is quite alike the way we drink Coca Cola. We like the sweet taste of Cola, so we keep on drinking it, but in fact we have no idea about its contents. According to Daniel Google is also very much like Ikea, a firm that provides us with furniture and other tools that are created only to be used in one way. This furniture cannot be changed, or expanded upon for different usage. He concludes that we need to be more aware of Googlekia. 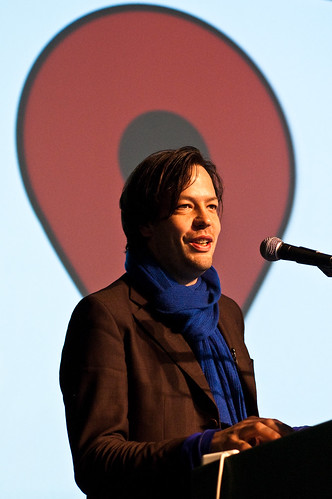