Michael Stevenson is a lecturer and PhD candidate at the Department of Media Studies, University of Amsterdam. For the Society of the Query evening program he presented a very interesting selection of artistic and activist projects that were engaged with (the re-attribution of) different elements related to Web search.

The IP-Browser (Govcom.org) for instance played with the linearity of querying the Web. It creates an alternative browsing experience that foregrounds the Web’s machine habitat and returns the user back to the basics of orderly Web browsing. The IP Browser looks up your IP address, and allows you to browse the Websites in your IP neighborhood, one by one in the order in which they are given in the IP address space.

Shmoogle (Tsila Hassine/De Geuzen) also deals with linearity on the Web, specifically the linearity of the search returns of Google. De Geuzen state that the best search returns that Google offers are not necessarily always the ones at the top. Unfortunately this is where the average Google user gets stuck. Shmoogle offers a way to find the search results in a chaotic way, and in doing so it ensures greater democracy.

The Internet Says No (Constant Dullaart) is a animated, fully functioning Google page (Google is placed in a marquee-frame). this work offers a pessimistic way to surf the internet.

The Misspelling-Generator (Linda Hilfling & Erik Borra). Erik Borra presented the work as a result of the fight against internet censorship. When doing a search in the Chinese version of Google on the Tiananmen Square Massacre, Linda Hilfling discovered a temporary loophole out of the Google self-censorship in China. By deliberately spelling Tiananmen incorrectly, she was taken to web-pages where other people had misspelled Tiananmen, and was thereby able to access pictures of demonstrations as well as the legendary image of the student in front of the tank through the sources of incorrect spellings. The Misspelling generator is a tool that can be used for internet activism. By writing variations like ‘tianamen’ and ‘tiananman’ the isolation politics of the Google’s spelling corrector can be subverted while Google’ selfcensorship can be circumvented. 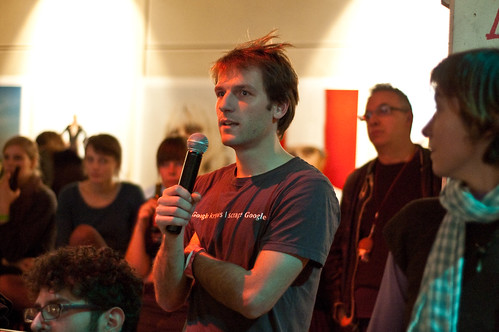 Z.A.P. (ApFab) is an automatic image generation installation. First you add a word using the ApFab touch-screen, then the ZapMachine will grab an image from the Internet. This image is the most important visual representation of that word, at that time, according to the current Internet authority Google. Finally, the individual images are incorporated into a new context, creating a new tense state of meaning and random relations. With “Zapmachine: Who gave you the right?” AbFab is asking the following questions:

-How much control do we have over the generated collage as artists?
-How much influence do you have on this process.
-How does the collage relate to the initial intention by which the image was uploaded on the Internet by the original author?
-Who is the author of this Zap collage?

Disease Disco (Constant Dullaart) “To every suffering its thumbnail”. Dullaart used the Google image search by color option, to query the word ‘disease’ and changes color ‘rhytmically’. The work is accompanied by the US billboard #1 hit song of the moment that the work was created.

The Global Anxiety Monitor (De Geuzen) uses html-frames to display automated image searches in different languages. Searching in Google for terms such as conflict, terrorism and climate change, this monitor traces the ebb and flow of fear in Arabic, Hebrew, English and Dutch.

Cookie Monster (Andrea Fiore) To capture on-line behavior, thousands of HTTP cookies are sent daily to web browsers to identify users and gather statistical knowledge about tastes and habits. The cookie consensus website hosts a collection of cookies that Andrea Fiore received while surfing through the first 50 entries of the Alexa directory of News sites. In the future it will also host a software that will give the users the capability to create their own cookie collections.

I Love Alaska (Lernert Engelberts & Sander Plug) is a beautifully framed internet movie series that tells the story of a middle aged woman living in Houston, Texas. The viewer follows her AOL search queries over the time span of months. “In the end, when she cheats on her husband with a man she met online, her life seems to crumble around her. She regrets her deceit, admits to her Internet addiction and dreams of a new life in Alaska.” 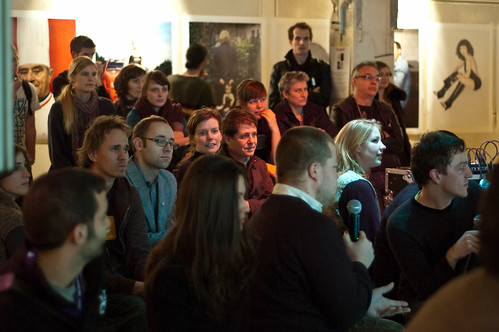