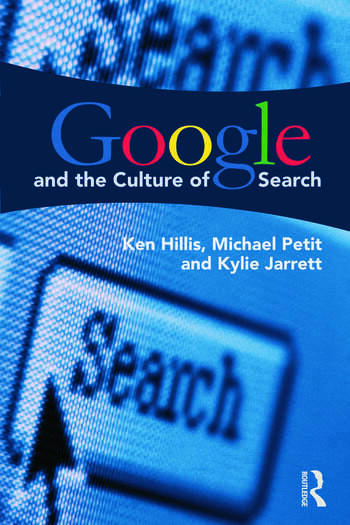 ‘Google and the Culture of Search’, written by Ken Hillis, Michael Petit and Kylie Jarrett, begins with an anecdote about Dave and Justin who are setting up a new business. Reflecting on how they have used Google in their preparations, Justin mentions how he views Google as a useful ‘thing’ that has helped them through ‘everything’, whereas Dave dismisses this as magical thinking and recalls how he actually had to ‘dig into’ this ‘magical box’ that Justin is describing (p. xi – xii).  What is interesting about these views on Google – according to the authors – is that they illustrate that when “online search enters the picture”, material forces (business practices and the world of political economy) intersect and overlap with metaphysical forces (the divine and magic) (p. xii). In the rest of the chapters, then, the authors set out to explore and elaborate on why this might be so.

Google as a consecrated actor
One of the main arguments they make in explaining the presence of metaphysical forces in the ‘culture of search’ is that Google has achieved a ‘consecrated status’. Bourdieu describes consecration as a form of ‘cultural legitimacy’ from peers and elite audiences and argues how it allows an actor “to define what constitutes a field’s best practice and in so doing also to influence the field’s internal dynamics” (p. 43). Google, the authors argue, gains its legitimacy by accumulating symbolic capital not only through its ‘nerd status’ and its roots in Californian ideology, but more importantly through its corporate slogan and cornerstone of its brand identity “Don’t be evil”. The authors describe how this accumulating of symbolic capital has shaped the idea that Google has a ‘higher calling’ and how this image is further stimulated by the firm’s wide range of philanthropic, environmental, and social justice issues that it supports (ibid.). In return – and much in line with how Bourdieu described the role of a consecrated actor – Google gets to define what ‘good search’ means and in so doing their algorithms actively shape how we encounter information in our culture of search and therefore how we come to know (p. 52). Most searchers do not know how the black box of search returns relevant results so successfully (and thereby comfortably); they only know that it does. It barely needs saying how this acceptance of ‘business-as-God’ has made Google a rather powerful entity.

From Neoplatonism to the World Brain
What follows is a whirlwind of theories, concepts, arguments and examples that serve to logically explain and reflect on Google’s ambition to organize all the ‘world’s information’. What lies at the core of this ambition? How exactly do the metaphysical and material forces intersect? And should we look into ways of curbing Google’s material, economic and metaphysical power, for example by appealing to the purportedly forgotten collective ‘we’ (p. 198)? The authors leave nothing unexplored as they move from concepts such as ‘nous’ and Neoplatonism to Borges’ dystopian writings on the Library of Babel, to Wells’ ideas of the World Brain, and to reflections on the reunification of the godhead with technology. With this all-embracing approach, the authors of Google and the Culture of the Search provide their readers with a very thorough and precise text, but it should be added that because of their extensive use of philosophical concepts and terms it forms a demanding read for readers who lack such a theoretical background

What does Google want?
Finally, one of the things that stands out in Google and the Culture of Search is its sharp interpretation and analysis of ‘what Google wants’ and what this says about our current  ‘culture of search’. What is central to Google’s aim to organize all the world’s information is, namely, to answer the question “What shall I do tomorrow?” For the authors of Google and the Culture of Search this question illustrates both the arrogance and naivety of Google’s utopian project. It shows many similarities with fundamentalist belief systems that think of their ‘way’ as the only ‘way’. It ignores the moral lesson of the Tower of Babel myth that the construction of a universal One always goes hand in hand with hubris, immoral power imbalances, and deep loss (p. 202). They quote Fredric Jameson’s assessment of the political value of utopia to stress how their value lies in showing us the “ideological shackles under which we currently labor” (p. 203).

In this assessment of Google’s utopian vision, then, Google and the Culture of Search stimulates readers to think about the challenges posed by Google’s combining of metaphysical forces with material forces. Do we want the business-as-God that Google is to define our existence, by updating the cogito to “I search therefore I am”? In a time in which the question “What did you do before Google? has become important both epistemologically and ontologically, Google and the Culture of Search makes a provoking read and provides many new insights into how Google (problematically?) positions itself in our ‘society of the query’.