Short interview with Sanne Koevoets from network cultures on Vimeo.

Dr. Sanne Koevoets currently teaches philosophy and new media studies at Leiden University College in The Hague. In her research she focuses on the gendered dynamics of the library in the network society, with which she has engaged through the figure of the female librarian and the trope of the labyrinth. 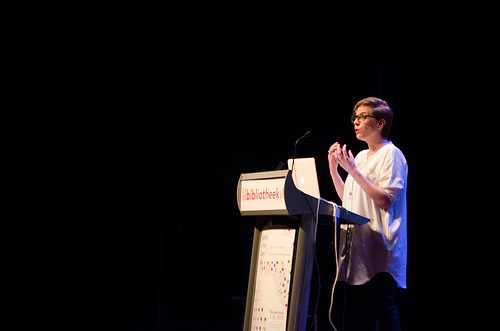 Sanne Koevoets- Society of the Query #2 (photo by Martin Risseeuw)

In her talk, Library Dwelling: Quest and Query Tropes in Narratives on Libraries and the Internet, she discussed about the possibility of the dream of The great Library of Alexandria being made possible by new digital technologies.

Dr. Koevoets discusses the library from multiple perspectives, showing how it is both viewed as a space that contains all the knowledge possible to us ( Borges’ The Library of Babel), but at the same time also as an impenetrable labyrinth that, although holding all this knowledge within its space, does not offer an intelligence system that allows for its exploring (Eco’s The Name of the Rose). She argues that any such organizing system is one of both inclusion and exclusion and is thus a political system made out of local prejudices and connections that shift as a result of a given system of power, so no real objective system of organization is possible. She brings into discussion Leibniz and his idea that the main problem with a library organisation system is rooted in the physical form of the book, which allows for the library to be only organized as linear. However, knowledge and meaning is based on complex cross-connections, so in this linear system knowledge itself becomes fragmented. 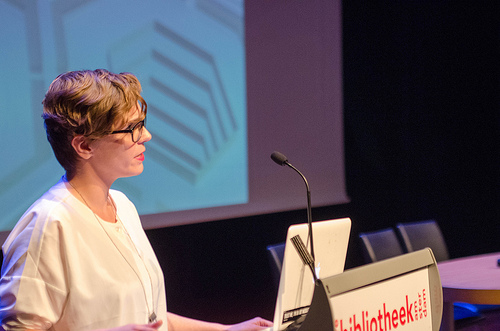 Sanne Koevoets- Society of the Query #2 (photo by Martin Risseeuw)

Furthermore, when discussing the possibility of the Universal Library becoming real in the digital realm, we must ask ourselves two questions. The first one is Can we state that it is objective?, meaning that we can find order in it with no exclusion? As the two days of conference have showed, search results are extremely customized and one must look no further than to countries that limit or censor internet access to understand that the Internet is also based on a network of powers that relies on inclusion and exclusion. The second point concerning the internet as Universal Library is „Is it a library?”, to which again we must respond negatively if we consider the symbolic implications of the library as physical space, which is to represent the link between knowledge and power.

Dr. Sanne Koevoets states that the are two plots or tropes to exploring the internet library: quest plot (in search of knowledge) and query plot (dwelling). She concludes by saying that the aim of dwelling should not be limited to locating or finding truth, but also to reflecting how knowledge is produced through discourse and materiality. She explained this point further by stating that knowledge itself is not emancipatory through the act of having it, but through understanding how it can circulate, how it is produced and performed and through understanding the relationship between the object and the subject of knowledge.

Society of the Query #2 – Sanne Koevoets: Library Dwelling: Quest and Query Tropes in Narratives on Libraries and the Internet from network cultures on Vimeo.