Short interview with Simon Knight from network cultures on Vimeo.

On day two of the Society of the Query conference, Simon Knight introduced his analysis of the search engine as an epistemic tool by outlining the latest policy changes in the Danish school system. After a recent pilot study (outlined here), Denmark has now rolled out new assessment regulations in which students are allowed to access any website – including Facebook – during examinations, so long as they do not use the web to communicate with one another or with persons outside of the classroom. Safeguards have been put in place to reduce abuses to the system, including lectures on what constitutes cheating, and periodic spot checks. The nature of the exam questions themselves provides a natural obstacle to cheating, in that students are not asked to merely recite facts and figures, but to sift through information about the tested subject matter and reflect critically upon it.

Knight’s talk engaged with the psychological and philosophical assumptions built into search engines and how people interact with them. He asserted that by changing the assessment system, the Danish government has made fundamentally epistemological claims about what constitutes knowledge, truth, and accuracy, and about the tasks that students are asked to perform. 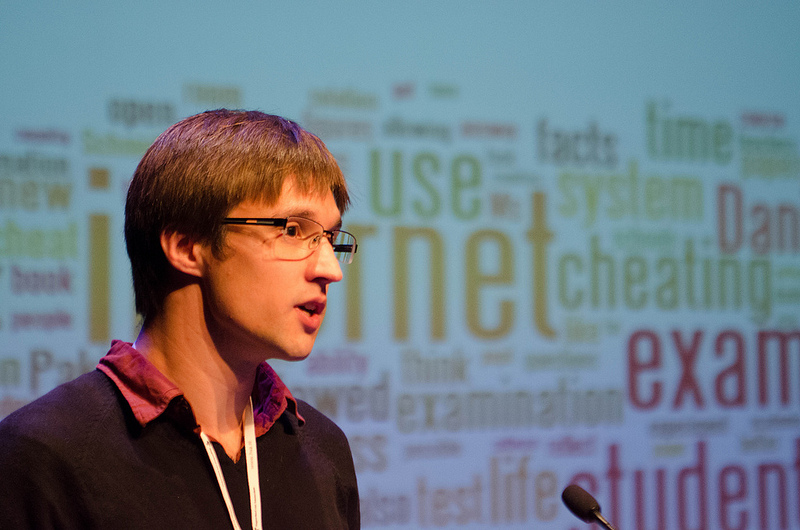 Some examples of claims that the Danish system implies, according to Knight, are that evaluation and understanding are connected to knowledge matters, that personal testimonies (such as those from friends or teachers) are unacceptable, yet that informants derived from querying the web are acceptable. In terms of tasks, Danish students are asked to compare and contrast information, evaluate the veracity of evidence, and decide when to stop researching. As Knight pointed out, web search is a skill in itself, and “people still aren’t necessarily great at Google,” reminding of examples such as the amusing web tool Let Me Google That For You.

Knight argued that context is important to consider when thinking about how people use and access information. In the case of search engines, it is necessary to keep in mind how they mediate access. Even on the level of rhetoric, Bing and Google claim slightly different approaches to information retrieval. Bing, leveraging its Facebook partnership, emphasizes contact in their tagline “For every search, there is someone who can help.” In contrast, Google’s approach seems to suggest that Google knows what you want before even you know it, and Knight noted that Google has not taken advantage of its Google+ resources to offer Bing-like personal testimonies. Whereas Bing stresses communication and direct testimony by guiding the user towards people who may be good informants, Google claims to authoritatively know the answers. Knight also pointed out that the Danish argument of denying students access to communication websites is already moot, due to the tight integration between search engines and social networks.

Knight then outlined the potential flaws within the Danish epistemological assumptions, such as the inherent risks of web search. These include filter bubbles, testimonial and hermeneutical injustices (prejudice and marginalization based on a user’s search history and country-level personalizations, respectively), and content holes such as gender and language biases. In contrast, Knight also highlighted the potential benefits of personal testimony, in that good informants should personalize information in order to make the content accessible and understandable.

Finally, Knight underscored the importance of reconciling search tools with users. He suggested that search engines should make their personalized assumptions more explicit, and offer users choices as to how these personalizations are enacted. He stressed the importance of teaching students information literacy skills, as searching for balanced information can be a difficult enterprise. He also recommended a few tools for diversity-aware search, including the Chrome add-on Balancer, which analyzes a user’s web browsing behavior to reveal its political slant, and suggests readings to target imbalances.

Society of the Query #2 – Simon Knight: Finding Knowledge: What it means to ‘know’ in the Age of Search from network cultures on Vimeo.