A Blog by Sebastian Olma 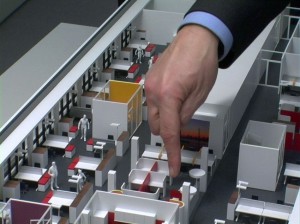 Last weekend, I went to the Digital Bauhaus Summit in Weimar, organized by Berlin’s Zentrale Intelligenz Agentur, a network of writers, designers and consultants who over the years have significantly shaped the discussion on digital culture, creative industries and design in Germany. The purpose of the summit was to explore contemporary theory and practice of “creative collaboration” and to think about a possible new Bauhaus manifesto for the digital age. The Bauhaus with its famous vision of a new synthesis between arts, craft and industry provided a loose historico-analytical template for a discussion of contemporary theories, techniques and methods of “creative collaboration.”The fact that this could be a slightly bigger challenge than one might initially think was highlighted by Swiss architect and design theorist Lukas Imhof. As he reminded the audience, there was a significant hiatus between the Bauhaus visionary rhetoric, developed by its founder Walter Gropius, and the empirical reality of the design practice it engendered.What the Bauhaus obviously accomplished was a modernist synthesis of the arts and design that gave it the iconic position it still holds today. Yet its relation to technology and industrial production remained a fairly troubled one. Perhaps one could say that the Bauhaus, while great in the production of design and architecture, failed to make the step toward industrial reproduction (exemplified by Imhof in Gropius’ design of the Adler Standard 6 auto mobile and some of his social housing projects). The Bauhaus elitist ethos [e.g., ignorance for questions of usability, lack of sensitivity for the functionality of materials (steel windows, etc.)] presented a serious hindrance for the realization of its sociopolitical ambitions of good design for the masses. As one commentator put it, one great accomplishment of the Bauhaus might indeed be the “idea of the relation” between artistic design and industry even if it hardly ever materialized.

What interests me in this context is less the question of what the Bauhaus may or may not have achieved in terms of modernist design but rather the difference between the rhetoric and real conditions of social change. One of the reasons why we idealize Bauhaus today is that it did have such a strong vision of artist/design-led social change. Gropius and his colleagues were driven by the idea to create a new kind of human being through the design of a revolutionary social infrastructure. Der neue Mensch the Bauhaus founders envisioned was to be shaped by the rational, functionalist and essentially democratic architecture (and commodities) that surrounded them. The emancipated, sovereign individual was supposed to emerge out of this infrastructure, leading the world towards a more collaborative, participative and generally better future.

In the original Bauhaus manifesto of 1919, Gropius had formulated his vision in with a great deal of pathos:

“Together let us desire, conceive, and create the new structure of the future, which will embrace architecture and sculpture and painting in one unity and which will one day rise toward heaven from the hands of a million workers like the crystal symbol of a new faith.”

Nearly a century later, emphatic visions of a neue Mensch are reemerging in the world of design and its related fields. However, this time around, their basic attitude has radically shifted: from politically driven aesthetics to innovation. In spite of the nominal importance of creativity, art and culture in our post-industrial societies, these visions are characterized by a near total absence of significant artistic impulse. Programs of “social innovation,” “social impact,” and “change” are largely driven by implicit and explicit teleologies of technological evolution where the position of the politically engaged artist or designer has been taken over by the designer of “smart” infrastructures. While these programs often present themselves with a quasi-religious pathos similar to that of Bauhaus’ dream of a more participatory, democratic infrastructure, they tend to be devoid of any political-aesthetic impetus. Proclamations of “design as the new idealism” remain pure hubris as long as the associated practice remains at the level of reducing real social and economic challenges of our time to “wicked problems” that can be deconstructed to a series of “design challenges” and then treated in a couple of therapeutic sessions by a team of app-makers, innovators and design thinkers.

In this respect, the screening at the Digital Bauhaus Summit of Harun Farocki’s “Ein neues Produkt” was a powerful illustration of the intricacies inherent in the relation between rhetoric and reality of “design for social change.” For one year, Farocki followed the directors of the Quickborner Team, a Hamburg consulting firm with roots in the Bauhaus tradition that today designs corporate environments for the “new way of working.” With his characteristically calm and discreet concentration, Farocki filmed their strategy workshops and client meetings, capturing the semiotic dynamics at work in the development of a new product. The spatial designs the Quickborner Team wants to provide are supposed to make employees faster, smarter, more effective and so on. The goal is a flexible workspace able to induce, if not produce, more self-determined, independent employees.

“The new way of working” is a big theme for corporations. The combination of digital facilitation of work processes and the appropriation of cultural practices that independent creative producers have experimented with over the last decade (coworking etc.) is seen as a way of updating the industrial configurations of corporate work space. Nothing wrong with this, let’s make these environments less depressing, if people become more productive in the process because the new environments cater more appropriately to their professional needs, that’s fine as well. Yet, what the semiotic dynamic of the meetings portrayed by Farocki reveals goes in a rather different direction. It transpires quickly that the protagonists of the film have a very limited interest in and understanding of the needs of a “modern employee.” The purpose of these workshops and client meetings appears to be limited to the generation of a vocabulary able to catch a managerial Zeitgeist that is totally unencumbered by any substantial reflection on what flexibility, collaboration, or, indeed, self-determination might entail from an employee’s point of view. Instead, the Quickborner space-gurus produce an uncanny combination of rhetorical hyperbole and conceptual obscurity in order to arrive at a level of pseudo-hip management gibberish that might not even be exceptional but has hardly ever been captured “in the corporate wild” like this. Their brew of design thinking fragments, systems theory sound bites and kitchen psychology is served as iconic impregnation of a discourse whose vacuity is as obvious as it is breathtaking.

Now, is this an articulation of what Boltanski and Chiapello once called the new spirit of capitalism? Are these consultants busy producing the contemporary ideology whose benevolent euphemisms are a smoke screen for intensified exploitation, redundancies, increased employee control and total social surveillance? Perhaps. However, the clumsy recitation of poorly digested Zeitgeist mantras lends the protagonists a strange air of provincial authenticity. They are not sinister, they want to do good. They are not perpetrators but rather accomplices in the maintenance of a management practice has become so obviously outmoded that all rhetorical stops have to be pulled to save it.

Which brings us back to the question of a Bauhaus manifesto for our times. Farocki has done us the great service of exposing both the strength and the weakness of a visionary discourse that has lost touch with the reality it pretends to address. Well, that’s how ideology works, one might respond and that is certainly true. However, at a time when a multitude of design thinkers and doers are busy developing timely concepts and practices of “creative collaboration” we may want to ask ourselves if it isn’t possible to use our expertise to shorten the rift between the rhetoric and reality of social change rather than help extend it even further. I know that in practical terms, this can be a tall order but it is also the kind of political sensitivity design needs today in order to properly fill the exponential position that society – for better or worse – seems to have assigned to it. If there was to be a new manifesto, I think this should be part of it.

1. The Collapse of the Left As the world holds...

Populism and Its Hidden Allies

1. The Collapse of the Left As the world holds its breath in the hope of surviving the first weeks and months of the Trump presidency, it is high time to start a political debate that is on par with the gravity of our current debacle. The American political system has been handed to an [...]

(this is an excerpt from my new book written with the generous support of the INC) Attack of the Big Yawn In his fascinating historical study of the rise of happiness to the highly valued commodity it has become in our time, the British sociologist William Davies offers a brief yet intriguing meditation on the [...]