Keep calm and carry on monitoring the media: a review of Monitorial Citizen

One couldn’t have wished for a more grounding response to contemporary media anxieties than this event. I don’t mean that the conference was all rainbows and lolkittens. I mean that it collected and tackled serious issues about the contemporary media landscape, its decentralization and its paranoias. It brought together perspectives on monitorial citizenship, citizen participation and citizen journalism –increasingly discussed in journalism and citizenship studies as new, post-modern, or alternative forms of civic engagement that also involve new, post-modern or alternative practices of media participation– and how this phenomenon can reinforce democratic ideals, and counteract forces or fears for their dissolution.

By all means, there seems to be a lot for us to worry about, a condition which the conference takes as its starting place. As moderator Corina Demetriou mentioned during her introduction, there’s the increasing fragmentation and polarization of our world where the success of populist rhetoric and the degradation of political discourse raises concern about our democratic institutions. Then there’s the proliferation of fake news, the dominance of media-scepticism, of conspiracy theory and of justifiably alarmist parental control discourse. And further yet, there’s the democratic failures of contemporary mass media, the corporate nature of social media, and concerns about the failures of media-education. All these in the face of increased surveillance and online censorship instituted with the excuse of / in order to battle all sorts of nightmarish villains.

The conference had the intended side-effect of facing and disarming most of the above, not least by providing historical context and balancing fears with contemporary research, following up criticisms with constructive questions, and offering numerous examples of citizen monitoring at work to an inspiring effect. NeMe gathered its speakers around the urgent premise of the potential for political change that is contained in networked citizen journalism (after Michael Schudson 1998) or citizen witnessing (after Stuart Allan, 2013). This was done in relation to what NeMe frames as a growing demand for political and corporate clarity that brings citizens immediate access and grants crucial issues a kind of evanescence: a transparency that is double-edged, both in terms of exposure, but also a tendency to fade or be drowned out in a sea of information. 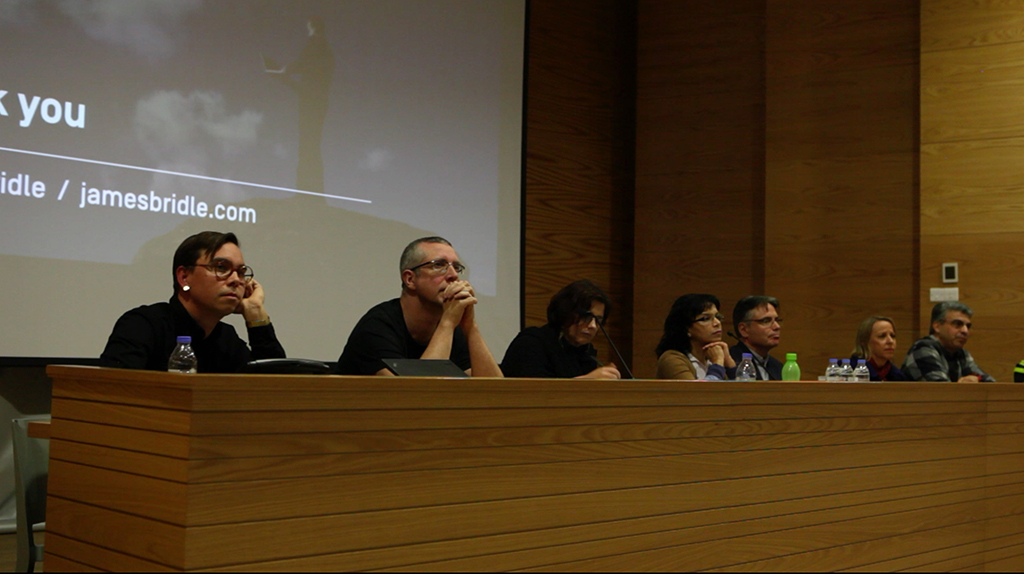 It helps to think of the conference in four parts. First, it provided an introduction to the discursive context and the development of the notion of citizen witnessing (Stuart Allan). Second, it moved on to crucial debates in media education (Joke Hermes) and children’s rights of access to information (Cynthia Carter). Third, it introduced a discussion of the politics of democratic citizen participation in theory and online (Nico Carpentier) and the transformative potential of grassroots media monitoring practices towards conflict transformation (Nicos Trimikliniotis). And it concluded, with satisfying momentum, with a discussion of monitorial practice from an artist perspective (James Bridle).

In the first presentation, the conference defined the field and what is at stake in terms of the media establishment’s clash with the simultaneous need to subsume new developments in citizen journalism: Stuart Allan set-up the context for this through a discussion of the idea that “somebody should be telling this because journalists aren’t.” His overview reached from the Kennedy assassination, to the definition of the Arab Spring as the Twitter revolution, to #blacklivesmatter, and the WITNESS human rights initiative. Allan also reflected on negative reactions from the world of professional journalism where citizen reporting is cast as “ghoulish voyeurism enabled by contemporary technology.” He most interestingly, juxtaposed professional “helicopter” or “parashoot” reporting, done according to editorial directives, with an emergent form of reporting from within. A form that is embedded and unsanitised, and comes in the form of unapologetically subjective documentation, where the amateur camera approaches truth or reality with an immediacy that trumps formal news, and demonstrates how purposeful citizen witnessing can bring about positive social change. 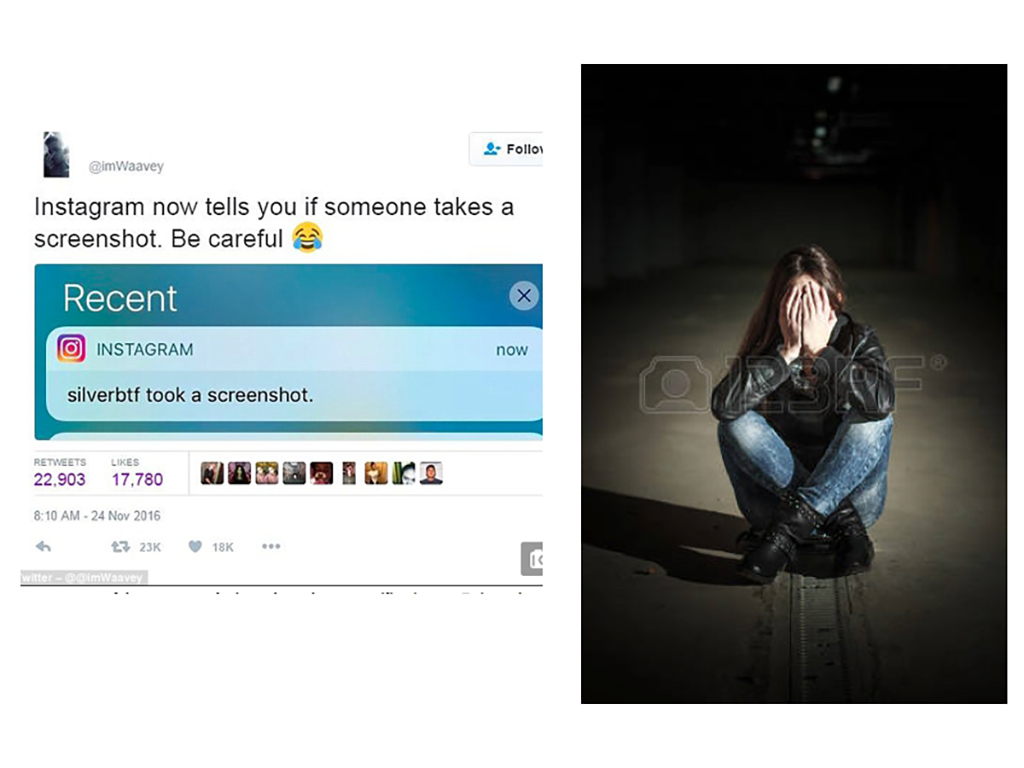 Then came two complementary discussions of sensitive issues around the failures and alarms of contemporary media-education (Joke Hermes) and children’s access to information, with emphasis to their online participation and their potential for political contribution (Cynthia Carter). Both speakers have been working towards the deconstruction of the stereotypic fear that it is a dangerous online world for young people, and they’ve been doing this in different ways and from different angles. Hermes discussed how a quarter century of media education has succeeded in breeding fear and mistrust rather than ways to corroborate and cross-reference. She made the very convincing argument that we need a plan for long-term engagement rather than immediate survival. That we must work towards the strategic teaching of the difference between downright holistic mistrust and meaningful engagement. That we may construct a perspective for cultural citizenship that makes “learning how to listen” (to disengaged sceptics) a priority: part of a new set of conditions for citizenship, where “irony, satire, and playing games” are understood as survival mechanisms, and “ways of blocking screening and fooling one’s parents are understood as useful tools for children to survive in all this, without giving in to conspiracy theories.” Following up from Hermes, Cynthia Carter explored arguments around parental control and its misunderstandings, with a discussion of how research on news media remains incomplete by failing to include the voices of children. She argued against perspectives that cast children as “passive recipients of information that is going to socialise them.” She emphasised how children’s civic rights are undermined by the mistaken perception that, primarily, rather than engaged, they need to be protected. She offered examples where interventions by children exercising monitorial citizenship, have the potential to change perceptions about children’s political interests and their capacity for meaningful, world-changing participation. 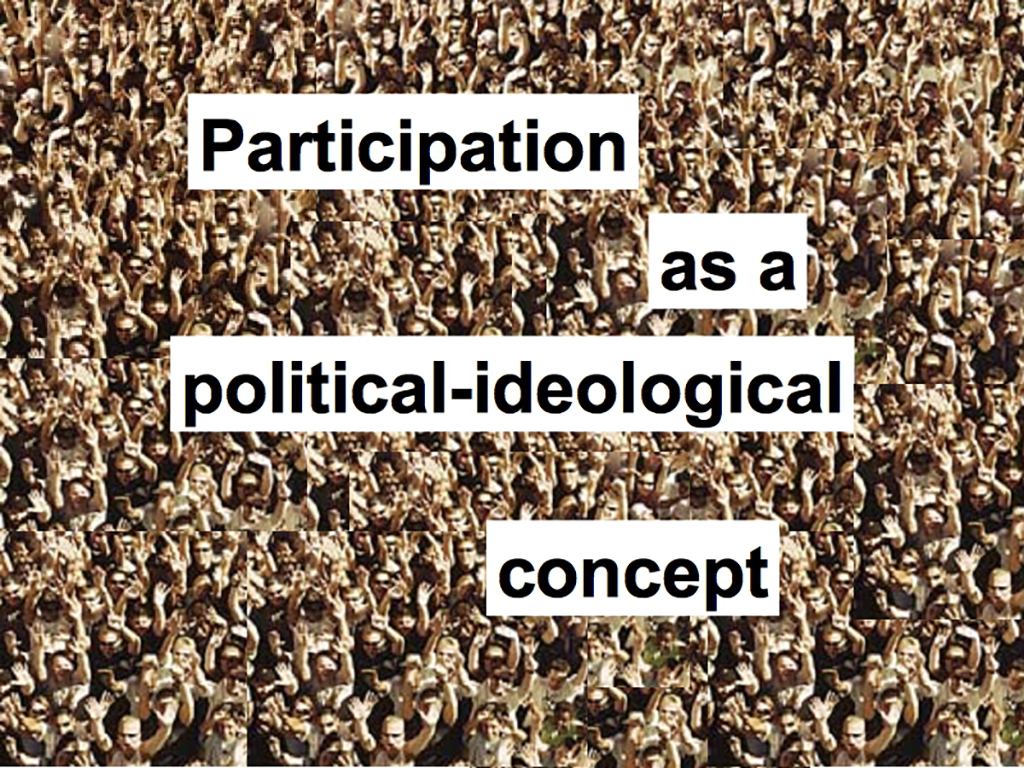 Next, Nicos Trimikliniotis introduced debates around participation and citizen journalism in relation to Cyprus, and to argue for the need to compare struggles and national contexts, particularly in relation to peace journalism and the potential for overcoming austerity and chauvinist citizenship models. He emphasised the role of the media in conflict transformation, in defining the nature of conflict and division: its contextualisation and relativisation, and transference towards social and other issues. For him, the creation of third spaces that defy the long-embedded interests of mainstream media is a crucially valuable new element. He identified such a critically valuable third space in the practice of the monitorial citizen. He used the example of the Cyprus-based collaborative online journalism collective Δέφτερη Ανάγνωση (trans. Second Reading), to argue that it indeed possible to undercut colluding media, and transform the reporting, the investigation, and the very nature of professional journalism, with the help and participation of monitorial citizens, intellectuals and artists.

Finally, James Bridle introduced a multilayered example of his own monitorial artistic research practice, an exercise of monitorial citizenship that actually researched issues of citizenship, migration, and asylum. He focused on a particular project where he worked to cross-reference details left out of a story in the UK press about Theresa May putting asylum seeker and hunger striker Isa Muazu on a private jet for deportation (2013). Bridle tried different methods in order to find out where this jet landed and to investigate the systemic, legal and spatial conditions for this kind of deportation. He spoke about the value of collectively maintained online tools that pool information through crowdsourcing, such as tools designed by the flight-spotting community, in this case making public the capacity to track flights. Bridle’s investigation led to a detention centre next to Heathrow, and then to the architectural mapping of this facility, where secret deportation trials seem to be taking place. He proposed this as a way of using the ability to research and cross-reference information through new tech, to make visible something that wasn’t visible before, and thus draw a picture of the system that produces a particular kind of story. In this case a story of deportation, also connected to the debate about global surveillance, by performing a kind of reverse surveillance.

Most interesting, and as a conclusion to the conference, Bridle made transparent his own questions about this instinct of monitorial citizenship: the issue that bringing things to view could be a solution to injustice. He pointed out that his own investigative whistleblowing and NSA surveillance, have in fact, the same logic behind them. Both top down centralised government surveillance, and bottom up citizen-driven monitoring or reverse surveillance are based on the logic that there’s something secret and if we bring it to view, then something will be radically transformed. Except according to Bridle this is not fully accurate. There is a danger here that we may make the invisible visible but remain blind to the systemic forces that brought it to be in the first place. 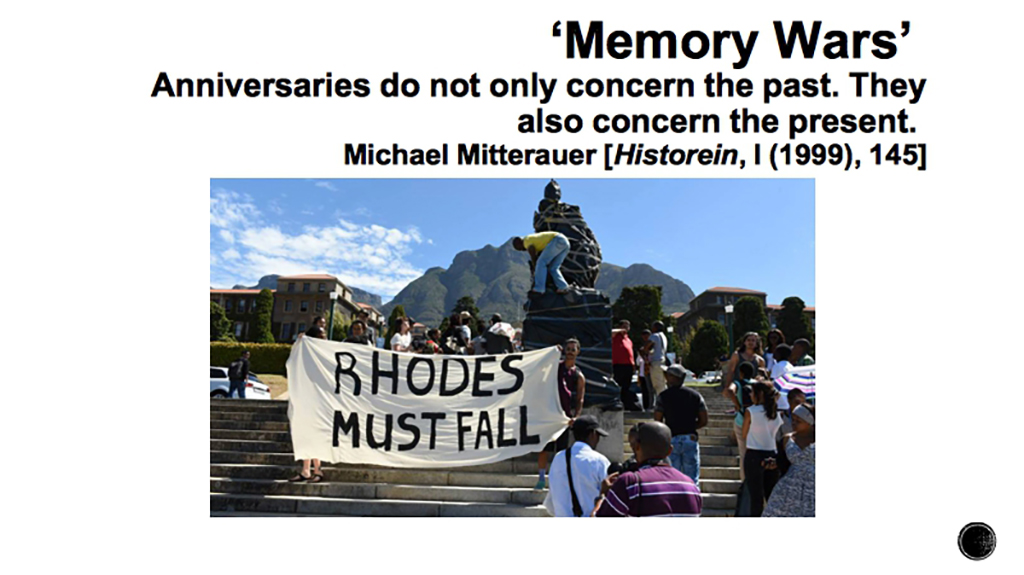 The discussion following the presentations focused on the potential of citizen monitoring given local Cypriot peculiarities, returning to the example of Δέφτερη Ανάγνωση, with members of the audience introducing the consideration that the structure of coordinated efforts of citizen monitoring (whether flat, or hierarchical, or anonymous, and so on) can play a role in its potential to set-up democratic resistance. The formal discussion transformed into after-conference mingling over drinks and finger food that was good enough to keep people processing in small groups for over an hour. My own conversations pushed onwards from James Bridle’s point about our unwitting complicity with surveillance logics: do we try to resist such logics? (The answer may be that we can try to temper them). This included a conversation with Joke Hermes, making the connection with a recent article by James Bridle documenting weird and often disturbing algorithmically generated youtube videos targeting children (Bridle, 2017), and putting the question of where to draw the line between parental concern and parental panic. (The answer seems to be gently, by avoiding random overexposure at the preverbal stage, not attempting totalitarian control, and focusing on being there and paying attention).

There’s a lot to pick up on in conclusion, aside from my insolent and possibly unjust isolation of one-liners in bold, for which I must ask the speakers’ forgiveness. I am most interested in two elements that seem especially innovative contributions to what is already a very rich and intensely investigated intersection of scholarly work on journalism and citizenship. This conference went the extra step to further bridge this growing field with other sides of media theory: First, in connection with peace scholarship and local issues around media collusion and their effect on conflict transformation through the work of Nicos Trimikliniotis. And secondly the connection made with educational theory and cultural studies through the work of Joke Hermes and Cynthia Carter, a beautifully resonating combination with a feminist focus on understanding, rather than fear or control.

Hooghe, M., & Dejaeghere, Y. (2007). Does the ‘monitorial citizen’exist? An empirical investigation into the occurrence of postmodern forms of citizenship in the Nordic countries. Scandinavian Political Studies, 30(2), 249–271

Photographs and videos by Sakari Laurila

This review was first published on Furtherfield.

By Državljan D. (Citizen D) We sat down with James Bridle who was visiting Ljubljana to give a talk at the Aksioma gallery to talk about the evergrowing problem of technodeterminism and the way future is being predicted by the machines. Listen to the podcast here. What’s the role of humanities in the information society, [...]

Out now! State Machines: Reflections and Actions at the Edge of Digital Citizenship, Finance, and Art

About the book: Today, we live in a world where every time we turn on our smartphones, we are inextricably tied by data, laws and flowing bytes to different countries. A world in which personal expressions are framed and mediated by digital platforms, and where new kinds of currencies, financial exchange and even labor bypass [...]

By: Tim Brouwer On the website clickmine.click visitors stumble upon a computer-generated grassland, which one can only interact with by clicking it. This browser-based game, developed by artist and software engineer Sarah Friend, is called Clickmine (2017) and invites players to engage with the realm of virtual currencies and experience mining them. Alongside her work [...]