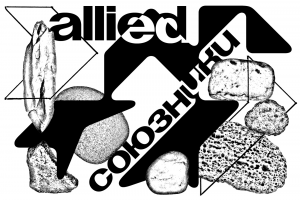 The first edition of the Kyiv Biennial named The School of Kyiv took place in 2015. By adapting, or rather reappropriating the well-known and highly commercial format of the international exhibition, Vasyl Cherepanyn, one of the organizers of the Biennial, sought to reflect the Maidan revolution in a thematic format of education. The school epitomized the idea of a beginning, of a new page in the history of liberated Ukraine, which needs to be learned and studied. On May 2, 2022, at a meeting in the Berlin Volksbühne, jointly held with Rosa-Luxemburg-Stiftung, which I attended online, Vasyl commented on how the current war is the resumption of the past revolutions, what the connection between Maidan and art history is, and what can be changed in European politics to help Ukraine.

Now is the right time to ascertain that political activity has a direct bearing on philosophy. Vasyl says, that when it comes to Lenin, one of the key Russian political philosophers, it becomes clear why his body remains unburied. His corpse, lying in the Mausoleum in the very heart of the country, is an important ideological element representing Russia’s inability and unwillingness to bury the imperial and Soviet colonial legacy. This very fact is symptomatic of all the wars Russia has initiated over the last 30 years. But not just Russia. Ukraine has been having this war for 8 years already, but it is still difficult for European politicians to admit that what we are dealing with is a new rise of fascism. Important to understand that this fascism is also the result of Europe, particularly Germany, feeding Putin and his government with weapons, money, and Nord Stream promises and ignoring Ukraine for almost a decade until it became too late. The pacifism of European authorities only encourages even greater aggression. These problems need to be denounced openly. The mistakes need to be denounced openly. It is time for that.

The war in Ukraine is a Pan-European problem. In his 2016 interview Vasyl mentioned that “Ukraine as a member state is the best protection of the European idea; the centre of Europe is on Maidan.” [2] Nevertheless, Ukraine has been the blind spot of European politics for a long time. Cherapanyn is sure that the Berlin Wall, although it was physically destroyed, is still functioning. It is the European wall, otherwise known as the EU borderlines. European governmentality is deeply entrenched within its borders. Their main concern is to preserve them, to leave Europe spatially intangible. This mindset is where the continuous refugee crisis derives from, and this is why Europe behaves as if this war is something outside of its protection, as if it is purely a Russia-Ukraine conflict. The uncertain status of Ukraine as the neighboring European country, which is not yet included in the formal relations of the European Union, implies an othering attitude.

Going back to Lenin, it is important to notice how the problem of the Russian oppression, which was constantly on the leftist agenda, gained momentum. The act of denazification that Putin is ostensibly performing in Ukraine needs to be done within Russia itself, where, as I can affirm, multiple ethnical communities have been oppressed and unified starting with Lenin and his followers. Unfortunately, Russia has been excluded from the colonial discourse for a long time due to the lack of overseas colonies. Nonetheless, now, when Russia is once again openly declaring its imperial ambitions, I often come across the activists from Siberia, the Far East, Central Asia and the Caucasus who are even more than ever actively involved in anti-imprerial and anti-propaganda resistance.

For Vasyl the 2014 Maidan Revolution seems to have taken place several lives ago. It was such a liberating and emancipating event. He strongly remembers one man standing at the Maidan square and holding a poster with only one handwritten word “finally.” People were speaking against dictatorship, against despotic modes of governing. The very word “maidan” is borrowed from a Turkish language, spoken by Crimean Tatars, who have been massively persecuted under the Russian occupation regime in Crimea. The place itself in Kyiv, the Maidan square, has always been an important public space where revolts of all kinds take place. It is the construction and the infrastructure of the city that made the Maidan Revolution possible. It has a spacio-political meaning. The Greek ideal of the polis with its active political agents was realized. Everyone could participate. The revolution itself was bottom-upped to the square. The protest was self-sustainable in the long run as it managed to create its own system. It had its structures of communication, education, and visual imagery production. The Maidan Revolution is the most powerful image that Ukraine has ever produced. It was Joseph Beuys’ dream about combining art and politics coming true. Whatever you were doing back then, you were contributing to this imagery. Together with the city infrastructure, the revolutionary visual networks immensely contributed to the resulting success.

At the same time, no art initiatives were supporting the revolution before Maidan. It was collectively produced afterward. For instance, there was a boom in film documentaries. Everybody with a mobile phone participating in the revolts was already a film director. The square itself was, as described by Vasyl, ready-made in Duchamp’s sense; it has always been a perfect place for all sorts of artistic documentation and interventions.

According to Vasyl, who is currently residing in the suburbs of Kyiv, the structures of solidarity that Ukrainians worked out during and after the Maidan Revolution are helping during the war. A whole country is currently a place for active solidarity and exchange. In this regard, what happens in Ukraine now and the ways it has been narrated are also key to solidarity structures in Europe: “The idea of Europe was reborn on Maidan.” [2]

Joulia Strauss, an artist, activist, and one of the participants in the discussion, noted that Maidan as a symbol of progressive leftist autonomist movement can also be tightly related to the international Occupy movement which aimed to advance social and economic equality. The ongoing war is taking place simply because the international revolution has not been finished. As Walter Benjamin says, behind every fascist regime, there is a failed revolution. These revolutions are so important because, as Vasyl put in, they offer a CHANCE. This chance has not yet been fully realized, because something else had happened. Now it is the war. The war happened. The revolution is still present because what Putin is doing now is reacting to the events that took place in 2014. Counter-revolutions, as we know, can take the form of wars.

LEARNING HOW TO MAIDAN

Maidan’s promises needed to be preserved so that new institutionalized formations such as the Open University of Maydan could be created on this new ground to deliver the promises of the revolution, and so that counter-revolutions could be prevented as well. It seemed as though the art structures that appeared after 2014 were not supporting this revolutionary optimism enough. This is why the Kyiv Biennial was initiated in the aftermath of the protests. Ukraine wouldn’t need any biennials if not for Maidan, because these demonstrations were the best art form ever imagined. And the biennale was meant to enable the continuation of Maidan.

The revolution was a unique experience of learning. Schools are associated with the start, the youth, and the beginning. Education itself has also always been of political nature. For Ukraine and Vasyl in particular, Maidan was the time of collective, instant learning of what politics is, how to ally and conduct something together, and how to believe in each other. As a result, the notion of schooling was taken as a basis of the first edition of the Kyiv Biennial which allowed the artists to combine the forms of protesting and art-making. The participants of the Biennial sought to reflect on prefigurative politics and to involve alternative ways of education and pedagogy that would meet the challenges of the revolutionary time.

Another aim of the Biennial is to make international bonds. The East Europe Biennial Alliance, which includes the Kyiv Biennial, Biennale Matter of Art Prague, Biennale Warszawa, OFF-Biennale Budapest, and Survival Kit Festival Riga, opens up new opportunities to challenge not only the Post-Soviet colonial agenda but also the power distribution within the current European Union structures. The attitude that Eastern European countries have experienced is similar to how they are seen as buffer zones and peripheries. But it is the peripheries where the most important and revolutionary processes are usually going on.

The format of the art biennale—once a means of promoting the nation-state and its nationalism, as noted by Pascal Gielen,—was chosen due to the potential this format has as an emancipatory tool. Vasyl insists that even though this form is notoriously known as commercialized and neoliberalized, it can still be reappropriated as a tool for liberation and the creation of democratic zones. The Kyiv Biennial has little in terms of similarities with the Venice one, for instance. The former is self-organized, autonomous, and not supported by the city. It is not a tourist attraction that is made for money. Unlike many other global biennials which center around the figure of a curator, the Kyiv Biennial aims at making ordinary people and artists, who are living now, visible. It is emancipating in a sense it has the Maidan intentions as the basis of its functioning.

Helping Scholars and Students At Risk

In the spring, a picture of a person sitting right in the trenches and giving online talks became viral on the Internet. Wearing a Ukrainian military uniform, a full battle dress with an automatic rifle over the shoulder, the soldier, as it turned out, is a teacher, who was lecturing the students of Uzhhorod National [...]

Argumentation Map: Pros and Cons of the Blockade of RT and Sputnik News in the EU

AMS-IX , one of the largest Internet exchanges in the world, and ECP | Platform for the Information Society, have published an argument map about the European internet blockade of propagandist media Russia Today and Sputnik as a result of the panel discussion between various scholars, NGO’s, and entrepreneurs. The map is an overview with all the [...]

TMR is proud to host a solidarity screening in collaboration with the Emergency Support Initiative by the Kyiv Biennial and HomeCinema to raise funds for Ukraine. The event will be a hybrid video broadcast, both physically screened and online broadcasted via http://homecinema.video accompanied by a talk on Media Witnessing in times of crisis by [...]